This election is looking very good for Hillary Clinton. In just three more days, she will more than likely be President Elect Hillary Clinton. I can’t wait to vote for her on Tuesday! I thought about voting early, but I finally decided to wait and go to my regular polling place on election day. That will be a very special moment. I already shed some tears when I voted for Hillary in the 2008 primary and again in the 2016 primary. But Tuesday will be the big enchilada.

Last night Hillary appeared with Jay Z and Beyonce at the get-out-the-vote concert in Cleveland. NYT:

In an election year when Hillary Clinton is depending on young black voters to turn out, she may have gotten her biggest boost yet here on Friday.

Some of the most famous names in hip-hop came out to rally votes for her at an event that featured Beyoncé, Jay Z and Chance the Rapper, all of whom implored thousands of cheering people to back the Democratic presidential nominee.

Mrs. Clinton called Beyoncé “a woman who is an inspiration to so many others” and thanked Jay Z “for addressing in his music some of our biggest challenges in the country: poverty, racism, the urgent need for criminal justice reform.”

“When I see them here, this passion and energy and intensity, I don’t even know where to begin because this is what America is, my friends,” she said.

At the concert, aimed largely at urging black voters and millennials to vote on Tuesday, some of the biggest stars emphasized the historical significance of potentially electing the first woman as president. 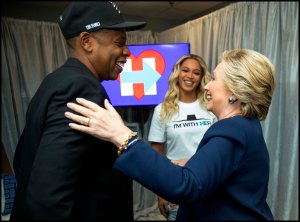 Jay Z began the concert with “Made in America.” He performed behind a screen that manipulated his face to look like an American flag. A-list artists, including Beyonce, Big Sean, Chance the Rapper, and J. Cole surprised a pumped up crowd….

Jay Z performed behind a black and white photograph of the White House. He repeated Clinton’s campaign slogan: “Stronger Together.”

Each special performer emerged, one after another, thrilling the crowd of about 10,000. Politics overlaid performance. Words flashed behind the musicians on a large screen:

The crowd erupted in screams as Beyonce took the stage. Queen B delivered a heartfelt speech about what seeing a woman in the White House means to her.

“There was a time when a woman’s opinion did not matter if you were black, if you were white, Mexican, Asian, Muslim, educated, poor or rich. If you were a woman, it did not matter. Less than 100 years ago, women did not have the right to vote.  Look how far we’ve come from having no voice to being on the brink of making history, again, by electing the first woman president. But we have to vote. The world looks to us as a progressive country that leads change,” Beyonce said. “I want my daughter to grow up seeing a woman lead our country.”

She transitioned into an appropriately patriotic song: Freedom. And followed it up with a medley of female empowerment songs: “Independent Women,” and “Run the World (Girls).”

The screen behind her flashed: “I’m with her.” 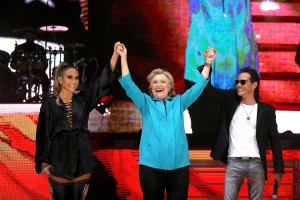 Hillary at concert with Jennifer Lopez and Marc Anthony in Miami

Hillary Clinton campaigned Friday in the company of friends and celebrities, first flanked by the billionaire businessman Mark Cuban in Pittsburgh and Detroit, and then at a concert in Cleveland with Jay Z and Beyoncé. High-wattage political leaders fanned out for her around the country: Her husband, Bill, stumped in Colorado, as President Obama rallied voters in North Carolina.

By comparison, Donald J. Trump was a lonely figure.

In the final days of the presidential race, Mr. Trump’s political isolation has made for an unusual spectacle on the campaign trail — and perhaps a limiting factor in his dogged comeback bid.

When it comes to bolstering Mr. Trump, the Republican Party is not sending its best: As party leaders have disavowed him or declined to back his candidacy, Mr. Trump has been left instead with an eclectic group of backup players to aid him in his last dash for votes. Though polls show Mr. Trump drawing closer to Mrs. Clinton, the most prominent Republicans in key swing states still fear that his unpopularity may taint them by association.

Trump told a crowd in Hershey, PA that he doesn’t need anyone but himself.

Campaigning in New Hampshire earlier on Friday, Mr. Trump did not appear with either Senator Kelly Ayotte, a Republican seeking re-election, or Chris Sununu, the Republican nominee for governor. Ms. Ayotte withdrew her endorsement of Mr. Trump last month, and Mr. Sununu has kept an awkward distance from Mr. Trump in his closely divided state.

Hillary with Katy Perry in Iowa

Tonight Hillary will be in Philadelphia for a free concert with Katy Perry.

Meanwhile, massive early voting by Latinos in Nevada, Florida, and Arizona is looking very good for Hillary and Democrats.

Democrats have built what could be an insurmountable edge in Nevada at the end of early voting in the Western battleground state.

In key regions, the party is matching or outpacing the lead President Barack Obama had at this point in 2012 on his way to a nearly 7-percentage-point win of the state’s six electoral votes.
Clark County — home of Las Vegas and more than two-thirds of Nevada’s active registered voters — saw its record for single-day early vote turnout shattered Friday when 57,174 people cast their ballots, according to data from the Nevada secretary of state’s office that’s based on the party registration of those who have voted.
Overall, Democrats have built a lead of more than 72,000 votes there — 13.7 points ahead of Republicans, and slightly larger than Obama’s 2012 edge.

Donald Trump will be in Reno on Saturday, but the Republicans almost certainly lost Nevada on Friday.

Trump’s path was nearly impossible, as I have been telling you, before what happened in Clark County on Friday. But now he needs a Miracle in Vegas on Election Day — and a Buffalo Bills Super Bowl championship is more likely — to turn this around. The ripple effect down the ticket probably will cost the Republicans Harry Reid’s Senate seat, two GOP House seats and control of the Legislature. 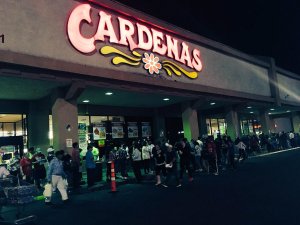 How devastating was it, epitomized by thousands of mostly Latino voters keeping Cardenas market open open in Vegas until 10 PM? This cataclysmic:

—-The Democrats won Clark County by more than 11,000 votes Friday (final mail count not posted yet), a record margin on a record-setting turnout day of 57,000 voters. The Dems now have a firewall — approaching 73,000 ballots — greater than 2012 when Barack Obama won the state by nearly 7 points. The 71,000 of 2012 was slightly higher in percentage terms, but raw votes matter. The lead is 14 percentage points — right at registration. You know what else matters? Registration advantages (142,000 in Clark). Reminder: When the Clark votes were counted from early/mail voting in 2012, Obama had a 69,000 vote lead in Clark County. Game over.

—-Total turnout without those rurals: 768,000, or 52.5 percent. If overall turnout ends up being 80 percent, that means two thirds of the vote is in — close to 2012. Republicans would have to not only win Election Day by close to double digits to turn around the lead Hillary Clinton almost surely has in early voting, but they would have to astronomically boost turnout. The goal for the Dems during early voting was to bank votes and to boost turnout as high as possible to minimize the number of votes left on Election Day to affect races. Folks, the Reid Machine went out with a bang.

Lines for early voting in Arizona

Arizona has seen the largest increase of early voting by Latinos of any state.

As of Oct. 30, nine days before the Nov. 8 election, 13 percent of the early ballots cast in Arizona came from Latino voters, up from 11 percent at the same point prior to the 2012 presidential election and from 8 percent in 2008.

The increase from 2012 to 2016 is the largest increase in early voting by Latinos in any state, according to statistics compiled by Catalist, a data company that works with progressive candidates and groups….

Data tabulated by Arizona’s Democratic Party showed an even bigger increase in early voting by Latinos in Arizona, from 6.2 percent in 2012 to nearly 12 percent through Nov. 1. The data is based on Hispanic surnames.

As of Nov. 1, the share of early balloting from voters with Hispanic surnames was nearly double the same time in 2012….

“There has been a large push by many Latino groups to vote by early ballot by mail to avoid any hassles at the ballot box in presenting ID and Latinos under extra scrutiny at the polls,” Garcia said.

There also are not a lot of undecided Latino voters, many of whom have been turned off by Donald Trump’s harsh comments about Mexicans and immigrants, Garcia said. 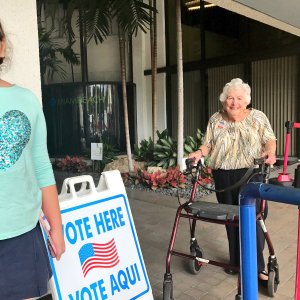 Donald Trump awakened a sleeping giant with his attacks on Mexicans and immigrants.

Mother Jones: Exclusive: The Democratic National Committee Has Told the FBI It Found Evidence Its HQ Was Bugged

AP via Politico: Melania Trump modeled in U.S. prior to getting work visa.

HuffPo: A Guy In A Trump Shirt Carried A Gun Outside Of A Virginia Polling Place. Authorities Say That’s Fine.

Jezebel: The Woman Who Accused Trump of Raping Her at 13 Just Dropped Her Lawsuit.

Washington Post: Trump is a threat to the West as we know it, even if he loses.