I’m going to be a bit more wonky than usual because I’m going to be making the case that we may need a bigger stimulus package that either the Democratic party or Republican party may be prepared to pass.  Right now, it appears the only thing that will get by the Senate right is a package of extended unemployment benefits.  I’m going to have to use two concepts that are extremely important to fiscal policy that make all undergraduate students tremble.  The first is the concept of a fiscal policy multiplier.  The second has to do with sorting through labor markets to get at more than just the unemployment rate to find possible ‘automatic stabilizers’.   Both are tedious exercises in basic economics.  Both have never been so significant as now due to some structural changes in the U.S. economy since the 1980s.

END_OF_DOCUMENT_TOKEN_TO_BE_REPLACED

An open letter to President Roosevelt

John Maynard Keynes is the the father of modern macroeconomics and Roosevelt’s New Deal.  His suggestions to President Roosevelt during the depression are still regarded as the map that led us our country out of The Great Depression.  The UK Guardian just did a reprint of parts of it and it made me think.  So, on celebrating our thanksgiving, I thought I’d reprint this letter he wrote to President Roosevelt that first appeared in the NY Times on New Year’s eve in 1933.  I know I’m a wonk, and this is a weird thing to be thankful for, but just think of all the bad things that would be happening right now if Keyne’s hadn’t continued to bug President Roosevelt to try some new and radical things.

Even Milton Friedman, whose later reformulation of the Quantity Theory of Money led to his Nobel Prize said that “We are all Keynesians now.” in recognition of this man.  I’m closing out on yet another semester of teaching undergraduates the lessons of Keynes.  My father who majored in economics used Keyne’s book as his textbook.  This was after his return from the European theatre in a tour of duty on a US bomber as the bombardier.  I remind my students that had I taught them Keyne’s in the 1920s, I most likely would’ve wound up on a ship to Russia and branded a Leninist.  He was THAT radical.  Today, he’s at the root of everything.

END_OF_DOCUMENT_TOKEN_TO_BE_REPLACED

Brilliance as an expression of Humanity

Nobody shall sleep!…
Nobody shall sleep!
Even you, o Princess,
in your cold room,
watch the stars,
that tremble with love and with hope.
But my secret is hidden within me,
my name no one shall know…
No!…No!…
On your mouth I will tell it when the light shines.
And my kiss will dissolve the silence that makes you mine!…
(No one will know his name and we must, alas, die.)
Vanish, o night!
Set, stars! Set, stars!
At dawn, I will win! I will win! I will win!

In Pursuit of Gross National Happiness

Whenever I teach my undergraduates the meaning of measuring the economic development of nations, I always mention the one country that does it differently.  This is the tiny Himalayan nation of Bhutan.  I know that you all think I’m biased here, because I am a Buddhist in the tradition of the Himalayan region.  (My Guru is a Tserpa Lama from Nepal and my lineage’s monastery is from a mountain vally of Mt. Everest.)  However, I’m always pleased when Bhutan lives up to and beyond my expectations. Both Nepal and Bhutan are among the world’s newest democracies.  Nepal has had many struggles (some violent) to achieve its new form of government.  I’m pleased to say my Lama’s wife, Ang Dawa is now sitting in its newly formed parliament.  I’m even more pleased to hear the words of Bhutan’s first elected prime minister.  Among these is that he is still measuring the country’s progress by not only the Gross National Product, but by its Gross National Happiness.  This was something the  last monarch held in esteem.   My Lama is always trying to convince me to come to Nepal to live and teach; something I will most certainly do in the future when the last daughter is firmly planted in her life.  However, if I could choose a country to work with, it would be Bhutan.

Jigmi Y. Thinley is now Bhutan’s first democratically elected prime minister.  He sees his first job is to prove to his constituents that democracy is worthwhile.  He was elected in a very uneventful campaign between two highly similar parties.  He was recently interviewed by the WSJ (see above link) in New York City.  I found this quote inspiring.

Mr. Thinley outlines his idea of good governance: “We have to ensure that in the first five years of our governance we act completely within the confines of the constitution . . . that the rule of law prevails under any circumstance. . . . We will respect and ensure the absolute separation of the three branches of government, that’s the judiciary, executive and the legislature.”

It is refreshing to hear that new democracies realize what our recently ‘elected’ leaders have forgotten.  It is all about the rule of law.  It is about the Constitution above all.  When you consider that Bhutan has provided refuge to many Tibetans fleeing religious and economic persecution by the Han Chinese,  it is wonderful to hear an elected official that gets it.

Democracy, according to Mr. Thinley, boils down to “the empowerment of the people, the freedom of the voter. . . . giving the capacity to the individual citizen to determine his or her own destiny,” he says. “Now if these are what democracy provides, then I would say that regardless of what culture you belong to, democracy is essential.”

Prime Minister Thinley is not giving up on the idea of promoting Gross National Happiness–something that it seems only a benign monarch could grant to his beloved peoples.  This is probably most telling about a leader who believes he was elected to serve the people; not have the people serve his ego.

Mr. Thinley will continue to implement the government policy of GNH. Happiness is not hedonistic, “it is not the kind of fleeting pleasures that we seek.” It has to do with “being able to balance material needs of the body and the spiritual needs of the mind.”

He says the conditions for the pursuit of happiness have four pillars: Equitable and sustainable socioeconomic growth; conservation of the fragile Himalayan economy and environment; cultural preservation and promotion — and good governance.

Mr. Thinley admits that there’s a limit to what the government can deliver. It can try to create the right conditions, but “the individual himself and herself must pursue happiness.”

I wish Mr. Thinley and the people of Bhutan nothing but continued growth in both GNP and GNH.

when the most empowering and delightful story happened.  It was about the “Gulabi Gang”  or the Pink Sari Ladies that have decided to take on the corrupt and ineffective men running Northern India.  They wear bright pink saris and carry sticks.  These gangs of empowered women not only go after corrupt officials but men who abandon or beat their wives.

My thought is we’re seeing the Indian equivalent of PUMAs.  They have no political party affiliation and even refuse to work with NGOS.  Leader Sampt Pal Devi refuses to to deal with them because ” they are always looking for kickbacks when they offer to fund us.” 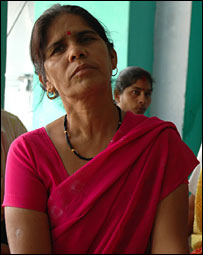 that Ms. Devi can push to the front of a line of local men to complain to officials about lack of electricity or corruption in the distribution of grain to the poor.  They even stormed a police station to free an untouchable man that they felt was being held only for purposes of getting money for his release.

Another interesting pink lady movement in India is the pink cabs in Bombay driven by women for women.  This has started an entire movement of entrepreneurial women.

“This is an unmet need,” Renuka Chowdhary, the Minister of Women and Children in India, said as the service started yesterday. “We have had a higher reporting of crime against women passengers. This is also a non-traditional job for women, so they are breaking out and becoming earning members for their families. We are confident it will catch on.”

Many of the women overcame the disapproval of friends and neighbours who thought that they should stay at home to look after their husbands and children.

Shweta Shinde, 42, applied for the job with the backing of her family and said that it had fulfilled her ambition to learn to drive. “For so many years, I wanted to have a car,” she said.

By paying off the balance on the low-interest loans, the women will own their taxis. They are expected to earn about 25,000 rupees a month, nearly three times the salary of a chauffeur and five times the pay of a domestic maid.

Read both the links up top to learn more about the pink ladies of India seeking to empower themselves and other women. I think it will make you smile and know that there is a worldwide sisterhood of pumas out there.