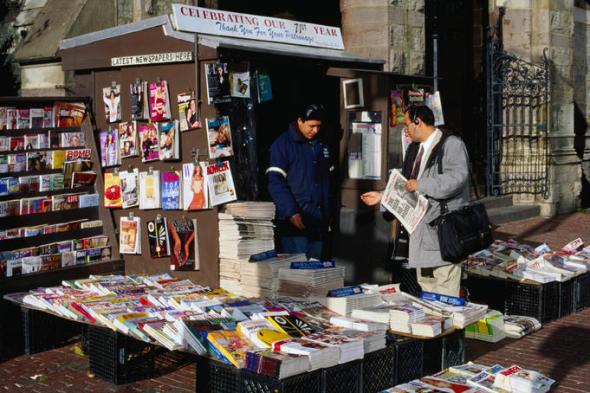 On Wednesday, April 15, Boston marked the second anniversary of the Boston Marathon bombing, now called “One Boston Day,” with a moment of silence at 2:49PM. That was the time that two bombs exploded about 12 seconds apart among crowds of people near the marathon finish line, leaving three people dead and 264 people injured–many of whom lost limbs.

(Reuters) – Boston marked the second anniversary of the deadly attack on its annual marathon on Wednesday with a quiet ceremony at the site where three died, unveiling a pair of banners marked with a heart.

Mayor Marty Walsh joined a group of survivors of the April 15, 2013, blasts, including Jane and Henry Richard, whose 8-year-old brother Martin was the youngest killed, as well as Jeff Bauman, who lost both legs. Some 264 people, including spectators, volunteers at runners at the Boston Marathon were injured.

At 2:49 p.m. ET (1849 GMT) New England’s largest city will observe a moment of silence to mark the time the first bomb went off.

“Our thoughts and prayers are with the victims and their families, who seek to make sense of that awful day,” said Massachusetts Governor Charlie Baker. “Those most affected by the events of two years ago have shown us all the way back with their courage, grace and determination.

At Fenway Park, there was a pause during the Red Sox-Nationals game to observe the city-wide moment of silence at 2:49PM.

On Patriots’ Day this coming Monday April 20th, runners will gather in Hopkinton, Massachusetts for the 119th running of the 26 mile race to the finish line in Copley Square.

Security for this year’s race will be higher than ever, and that is causing some controversy.

Nearly a million people will line the streets to watch the Boston Marathon on Monday, and someone else will be watching them. Bill Ridge with the Boston Police says video surveillance is a big part of the security plan.

“We’ve got a lot of cameras out there,” he says. “We’re going to be watching the portions in Boston — particularly the routes along Boylston Street, the finish line.” …. Video footage helped identify the terrorists, and the number and quality of video cameras has gone up since then.

The extent of the surveillance of Boston described in the article is troubling. NPR talked to Mark Savage of Lan-Tel Communications, which is in charge of surveillance for the marathon.

“I’m zooming in on the infield of Fenway Park,” he says while maneuvering a camera. He uses a laptop to swivel and zoom the HD video camera on a building hundreds of yards away from the ballpark. The zoom is so powerful, Johnson says it could probably tell whether a Red Sox pitcher has thrown a strike or a ball.

In the same way that televisions have gotten higher resolutions through the years, so have video cameras — and Johnson says cheaper bandwidth and data storage make it easy to record more, better-quality video. 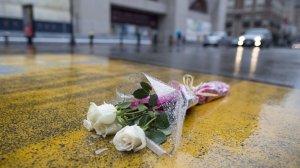 Flowers placed at the finish line of the Boston Marathon last week (from NPR).

Apparently the Boston Police have already installed a lot of surveillance equipment around the city.

Kade Crockford of the American Civil Liberties Union of Massachusetts says she understands the need for surveillance at a big public event like the Boston Marathon — but objects to expanding its use. While standing outside the Old State House, she points out four different surveillance cameras catching her every move.

“[A big event] doesn’t trigger privacy concerns,” she says. “What does trigger privacy concerns is the City of Boston installing a network of cameras — some in residential neighborhoods — that enable law enforcement to track individual people from the moment that we leave our homes in the morning until the moment we return at night, seeing basically everywhere we went and everything that we did.”

Boston Police won’t say how many cameras are already in the city’s network, or how many new ones are going up for the marathon. But some of them will stay online afterward.

The anniversary and the storied Boston foot race comes during a pause in the trial of Dzhokhar Tsarnaev, who was found guilty on all counts on Wednesday April 8. The jury still must decide whether Tsarnaev will get live in prison without parole or the death penalty. Technically, the break before the penalty phase is to allow the defense more time to prepare their witnesses, but it would have been difficult for jurors to deal with life and death questions during the bombing anniversary and the running of this year’s race.

The family of Boston Marathon bombing victim Martin Richard joins Boston Mayor Marty Walsh (R) at a ceremony at the site of the second bomb blast on the second anniversary of the bombings in Boston, Massachusetts April 15, 2015. REUTERS/Brian Snyder

Kevin Cullen at The Boston Globe suggests other questions about the bombing that need to be answered.

A Boston cop I know, who was at the finish line when the bombs exploded and who saved lives that day, has a question.

“Who were the FBI agents who interviewed Tamerlan Tsarnaev after the Russians raised questions about him two years before the bombings, and why didn’t they recognize Tamerlan from the photos the FBI released?” he asked.

It’s a good question, one that the prosecution won’t want to ask, one that the defense needs to ask, if it isn’t deemed irrelevant by O’Toole.

The defense has argued all along that Dzhokhar Tsarnaev was steered into the bombing plot by his older, domineering, more-radicalized brother. Tamerlan Tsarnaev, dead almost two years, will be mentioned as often as his little brother in this phase of the trial.

Cullen says the FBI did good work after the bombs went off, but . . . .

Nor will questions about Tamerlan’s wife, Katherine, go away. The government broadly hinted but never came right out and said they believe the bombs or at least components for the bombs were assembled at the Cambridge apartment Katherine and Tamerlan shared with their daughter, a toddler.

The defense didn’t try to debunk the suggestion nearly as strongly as you might think because it allowed them to point out that the fingerprints on all the tools that might have been used to make the bombs were Tamerlan’s, not Dzhokhar’s.

Why wasn’t Katherine charged? Did she cooperate with investigators?

One of the other nagging questions is whether the Tsarnaev brothers had any accomplices in gathering all the gunpowder from fireworks they used in their bombs. Listening to testimony about how much powder was needed to make the bombs, it seemed like the Tsarnaev brothers would have to be doing nothing else but dismantling fireworks for months. 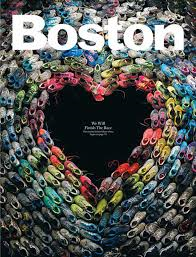 All good questions and there are more good ones at the link. Cullen notes that we particularly need answers about why the FBI shot and killed Ibragim Todashev, who was potentially their best source of information about Tamerlan and his motives.

The Feds are getting plenty of pushback here in the Boston area on their goal of putting Dzhokhar Tsarnaev to death. After all, Massachusetts does not have the death penalty. Victims families and survivors as well as citizens have expressed their wishes that Tsarnaev be allowed spend the rest of his life in prison.

The survey (topline, crosstabs) of 509 registered voters in Greater Boston found 58 percent support life in prison for Tsarnaev. That number rises to 61 percent among voters in the city of Boston.

“Over the last month, we’ve seen support for life in prison grow by about 10 points [in the Boston area],” said Steve Koczela, president of the MassINC Polling Group, which conducts surveys for WBUR.

According to the poll, only 31 percent of Boston area residents said they support the death penalty for Tsarnaev. That support drops to 26 percent in the city of Boston.

The earlier WBUR survey was conducted last month, while the first phase of the Tsarnaev trial was ongoing. The latest poll was conducted just days after his conviction.

People’s feelings about executing the convicted bomber are on par with how they view the death penalty in general.

The parents of Martin Lawrence have begged the prosecution to drop the death penalty request.

The parents of Martin Richard, the 8-year-old boy killed in the Boston Marathon bombings two years ago, have writtten a plea to end the attention convicted killer Dzhokhar Tsarnaev has received and spare him from the death penalty.

In an essay written for The Boston Globe, Bill and Denise Richard ask that the case come to a close, writing, “We know that the government has its reasons for seeking the death penalty, but the continued pursuit of that punishment could bring years of appeals and prolong reliving the most painful day of our lives.”

In a posting on Facebook and on her Twitter account, Jennifer L. Lemmerman wrote that she continues to mourn the loss of her younger brother, who was widely lauded after his murder.

Lemmerman, a graduate of Boston College School of Social Work and an alderwoman in Melrose, wrote that she will never forgive Tsarnaev for ending her brother’s life.

But, she also wrote, she does not believe in the death penalty even after what has happened to her and her family.

“Whenever someone speaks out against the death penalty, they are challenged to imagine how they would feel if someone they love were killed. I’ve been given that horrible perspective and I can say that my position has only strengthened,’’ she wrote on her Facebook account.

Obviously, I think killing Tsarnaev would be wrong and counterproductive. The death penalty would only turn him into a martyr anyway, and it would mean years, perhaps decades of court battles in which he would get unnecessary and undeserved public attention; and the victims families would be forced to relive their pain and loss again and again.

As always, this is an open thread. Please feel free to comment and post links on any topic.