← Friday Reads: The Long Tantrum of Bernie and the Dudebros
Wednesday Reads: Transphobia 6-5000 →

From The Daily Beast http://www.thedailybeast.com/articles/2016/05/19/bernie-and-jane-sanders-the-democratic-party-s-thelma-and-louise.html?via=desktop&source=twitter

Finally some journalists are beginning to understand that Bernie Sanders is serious about trying to destroy the Democratic Party in hope that his “political revolution” will emerge from the chaos he and his supporters create. The Party should be focusing on how to beat Donald Trump, but Bernie is enjoying being the center of attention so much that he just can’t stop himself.

When he started running for president, I’m convinced that Sanders didn’t think he had a chance, but once the donations started flowing in and he saw the cheering crowd and read the article lionizing him, he began to believe he would win the nomination and actually be able to run the country his way.

Now that he has lost, Sanders seems determined to take everyone else down with him and hand the presidency to a seriously insane person with no experience in politics or government and no interest in learning about either. 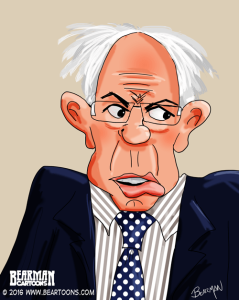 Michael Tomasky at The Daily Beast: Bernie and Jane Sanders: The Democratic Party’s Thelma and Louise.

Now we are forced to ask whether Bernie Sanders has decided he wants to destroy the Democratic Party. I’m sure he would say he wants to save it. The way we saved villages in Vietnam. You know the quote.

I don’t allege that he decided to run as a Democrat for this reason. He did so, I’m told by those who’d know, because he did not want to be the 21st-century Ralph Nader and because he knew that running against Hillary Clinton would give him a much bigger stage on which to inveigh against the parasites.

That was then. But now, after the Nevada fracas and his gobsmacking statement in the wake of it, it’s remorselessly clear that he wants to obliterate the Democratic Party. Revolutions take on lives of their own. Robespierre never thought back in 1790 or ’91 that the guillotine would be needed. But as the dialecticians like to say, historical circumstances change. By 1793, those little sheep who’d been misled by sellouts like Danton were part of the…corrupt establishment.

Tomasky explains what he thinks is motivating Bernie and Jane Sanders and Jeff Weaver’s vicious attack on the Democratic Party.

Most things that happen in campaigns tell us something about people as politicians. This statement told us something about Sanders—and, I suspect, about his wife, Jane, and Jeff Weaver, his campaign manager—as human beings. Everything is subordinated to ideology. Basic human impulses are buried. There is only politics, only ideology, only the movement. I’m really glad we’re not in Romania in 1965. I know where I’d be.

I know this because I’ve known lots of people like this. Leftists like Sanders regard the Democratic Party as a far bigger problem in the world than the Republican Party. The thinking goes like this: The Republicans, sure, everybody knows they’re evil. That’s obvious. But the Democrats, they’re evil too. They adopt a few attractive positions, say nice things on certain issues as long as saying those nice things doesn’t really threaten the established economic order, so they’re even worse, finally, because they fool people into thinking they’re on their side. I heard this a hundred times from the old guys who used to hector me at the Socialist Scholars Conference in Manhattan 25 years ago when I used to speak there.

That’s what Bernie is. If he’d stayed in Brooklyn, he’d have been a Social Scholars Conference hectorer. He had the wisdom to move to a podunk state, and the luck to do so just as it was becoming the place where all the aging hippies were moving, and so he became a mayor and then a House member and, finally and exaltedly, a senator. 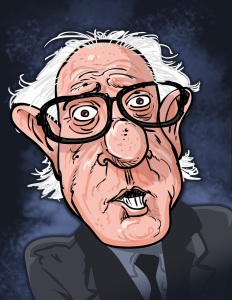 So many liberal bloggers and journalists have been saying nice things about Bernie throughout the primaries. Yesterday, Josh Marshall finally woke up to reality: It Comes From the Very Top.

Over the last several weeks I’ve had a series of conversations with multiple highly knowledgable, highly placed people. Perhaps it’s coming from Weaver too. The two guys have been together for decades. But the ‘burn it down’ attitude, the upping the ante, everything we saw in that statement released today by the campaign seems to be coming from Sanders himself. Right from the top.

This should have been obvious to me. The tone and tenor of a campaign always come from the top. It wasn’t obvious to me until now.

This might be because he’s temperamentally like that. There’s some evidence for that. It may also be that, like many other presidential contenders, once you get close it is simply impossible to let go. I don’t know which it is. That would only be my speculation. But this is coming from Bernie Sanders. It’s not Weaver. It’s not driven by people around him. It’s right from him. And what I understand from knowledgable sources is that in the last few weeks anyone who was trying to rein it in has basically stopped trying and just decided to let Bernie be Bernie.

Some journalists, like MSNBC’s Chris Hayes, Rachel Maddow, and Lawrence O’Donnell have basically been surrogates for the Sanders campaign. I’m not sure where Hayes and Maddow stand on burning down the Democratic Party, but Lawrence O’Donnell made it clear last night that he’s on board with Bernie’s plan. 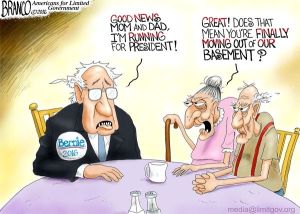 Mother Jones’ Kevin Drum is still holding onto the fantasy that Sanders is basically a good guy who has gotten caught up in power-seeking: The Sad Decline and Fall of Bernie Sanders.

The one thing I do keep wondering about is what happened to Bernie Sanders. Before this campaign, he was a gadfly, he was a critic of the system, and he was a man of strong principles. He still is, but he’s also obviously very, very bitter. I wonder if all this was worth it for him? By all objective measures he did way better than anyone expected and had far more influence than anyone thought he would, and he should feel good about that. Instead, he seems more angry and resentful with every passing day….

I don’t even blame anyone in particular. Maybe Hillary’s team played too rough. Maybe Bernie’s team is too thin-skinned. I just don’t know. But it’s sort of painful to see a good person like Bernie turned into such a sullen and resentful man. And doubly painful to see him take his followers down that path too.

Usually these things fade with a bit of time. Politics is politics, after all. But for Bernie, it’s always been more than politics. I wonder if he’s ever going to get over this?

“Hillary’s team played too rough?” Give me a break. They have held back on many of the attacks they could have used.

On last night’s show, O’Donnell hyped the latest Fox News poll that had Trump leading Clinton by a couple of points; of course he failed to point out that poll sample included a larger proportion of Republicans than is contained in the population as a whole.

O’Donnell noted that Bernie Sanders still leads Trump in the Fox poll. He claimed that Hillary Clinton has never been able to raise her standing in polls–she always goes down. He actually went on to advocate that Democratic superdelegates should overturn the will of the voters and make Sanders the nominee!

Here’s Greg Sargent, who has been Bernie-friendly for most of the campaign: Will Bernie Sanders burn it all down?

In an interview with me today, top Sanders adviser Tad Devine — while stressing that Sanders would support the eventual nominee — demurred on the broader question of whether he would, in the end, do everything necessary to persuade his supporters of the legitimacy of the process.

At the same time, in a separate interview, a top supporter of Sanders — Senator Jeff Merkley of Oregon — bluntly told me that if Sanders finishes behind in pledged delegates and the popular vote, he should not continue to try to win over super-delegates, and should concede rather than take the battle to the convention.

I asked Devine: If Clinton wins the nomination after all the votes have been cast, will Sanders issue an unequivocal declaration that the outcome was legitimate?

“We’re still involved in this process, so it’s hard for me to declare what’s going to happen at the end,” Devine said. “As we look forward, there are a lot of issues of deep concern.”

Devine cited the DNC’s appointment of former Rep. Barney Frank as the chairman of the Democratic National Convention’s Rules Committee and the appointment of Connecticut governor Dan Malloy as the co-chair of the Platform Committee, arguing that both had been “partisan” in their “attacks” on Sanders.

So the answer is no. The Sanders campaign will continue to whip up the Bernie bros and encourage protests and perhaps even violence at the Democratic convention in July. Democratic leaders need to act now to head these people off at the pass.

The Hill reports that Democrats held a closed-door meeting on Tuesday to discuss the Sanders threat: How Senate Democrats are trying to deal with Sanders.

Democrats in the room decided the best course would be to let Senate Democratic Leader Harry Reid (Nev.) handle the delicate task of talking to Sanders about the increasingly negative tone of supporters of his presidential bid, according to sources familiar with what happened at the meeting.

“I’m leaving it up to Reid. That’s what the caucus did yesterday. We said he would be the lead on it,” said one Democratic senator. “There was some suggestion that we would all make calls. And everybody said the best idea is to let the leader handle it.”

A senior Democratic aide said that thinking reflects an acknowledgement among the senators that Reid is the one member of the caucus who “has an actual relationship with him.”

The presidential candidate is not chummy with his colleagues.

Fellow senators have been known to roll their eyes at his idealistic — some say unrealistic — jeremiads in private meetings. Sanders is known for speaking out at the sessions.

Reid, however, has always been a helpful ally. He gave Sanders the full benefits of membership in the Democratic caucus after his election to the Senate in 2006, rewarding him with the committee assignments he wanted even though he was not a registered Democrat.

Well, Harry Reid tried and failed to reason with Bernie. To paraphrase the famous quote from Jaws, I think the Democrats are gonna need a bigger plan.

53 Comments on “Thursday Reads: Berning Down The Democratic Party”