← Friday Reads: In Other news, POS sticks to toilet paper and 30% of the population votes for 70% of the Senate
Wednesday Reads: “If you feel like your ex might show up at your house, me and my bat don’t mind staying over” bitches. →

Honestly, I’m not capable of writing much of anything this morning. The Republicans are now directly attacking Brett Kavanaugh’s accusers, Mitch McConnell is going to steamroller any objections to the fake FBI background check, and it looks like Susan Collins along with endangered Democrats Heidi Heitcamp and Joe Manchin will probably vote yes.

Trump has been “president” for less than two years and he has managed to destroy the presidency, the House and Senate, and now he may destroy any remaining credibility for the Supreme Court for decades to come. And he’s making me sick–physically, mentally, and spiritually. I promise I’m going to fight my way back from my current depressed state, but it’s going to take awhile.

Spearheaded by Senate Majority Leader Mitch McConnell (R-Ky.), the blistering campaign to confirm Kavanaugh to the Supreme Court includes personal attacks on the women who have leveled claims against the judge, including the release Tuesday of a salacious statement that purports to describe the sex life of another accuser, Julie Swetnick.

The effort is shattering Senate norms at a critical moment for Kavanaugh, and it signals that the GOP is embracing the tactics of President Trump, who mocked Ford at a political rally Tuesday night days after calling her credible.

The strategy has drawn condemnation, and it has even raised questions about whether Republicans have violated a provision of the Violence Against Women Act by disclosing Swetnick’s purported sexual preferences.

But party leaders are undaunted, concluding that a scorched-earth strategy is the most effective way to defend Kavanaugh and rally enough support to confirm him to the nation’s highest court. 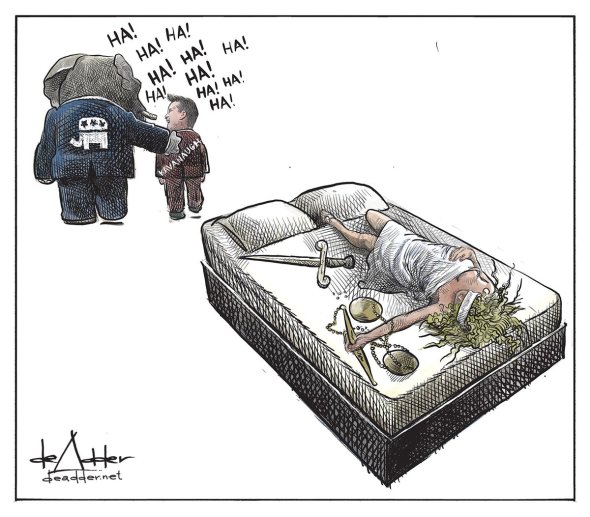 Greg Sargent at the WaPo seems to be asking if Republican Senators who where shocked shocked! at Trump’s attacks on Christine Blasey Ford will rush ahead to vote for Kavanaugh anyway: Trump’s disgusting attack on Christine Ford cannot be wished away.

When President Trump attacked Ford at a rally on Tuesday night, he did more than merely showcase his typically depraved and hateful nature. What Trump really did was inform the country in no uncertain terms that he will do all he can to ensure that the country does not — and cannot — heal its searing divisions over the Kavanaugh matter, after it is resolved.

In this, Trump broke from the carefully crafted GOP strategy of refraining from questioning that the attack happened while suggesting it might have been carried out by someone else. Instead, Trump ridiculed the claim itself and insisted that the only true victim in this situation is Kavanaugh.

What Trump is really signaling here is that, if Kavanaugh is confirmed, he will continue to rub the faces of millions of women in excrement over it. Trump was doing precisely what that woman accused Flake of doing — telling women that their sexual assault claims “don’t matter” — and he was undertaking this provocation deliberately, using the bully pulpit of the presidency to do so.

Will Jeff Flake, Susan Collins, Lisa Murkowski, Heidi Heitcamp, and Joe Manchin vote to ratify Trump’s cruel and repulsive attacks? If they do, women must rise up in anger and punish them. 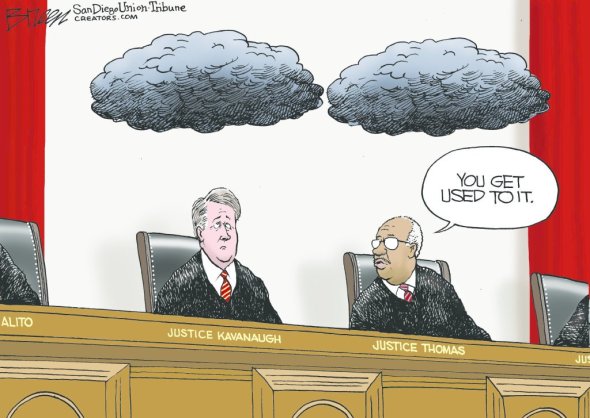 Jane Mayer and Ronan Farrow at The New Yorker: The F.B.I. Probe Ignored Testimonies from Former Classmates of Kavanaugh.

Frustrated potential witnesses who have been unable to speak with the F.B.I agents conducting the investigation into sexual-assault allegations against Donald Trump’s Supreme Court nominee, Brett Kavanaugh, have been resorting to sending statements, unsolicited, to the Bureau and to senators, in hopes that they would be seen before the inquiry concluded. On Monday, President Trump said that the Bureau should be able to interview “anybody they want within reason,” but the extent of the constraints placed on the investigating agents by the White House remained unclear. Late Wednesday night, Senate Majority Leader Mitch McConnell announced that the F.B.I. probe was over and cleared the way for an important procedural vote on Kavanaugh’s nomination to take place on Friday. NBC News reported that dozens of people who said that they had information about Kavanaugh had contacted F.B.I. field offices, but agents had not been permitted to talk to many of them. Several people interested in speaking to the F.B.I. expressed exasperation in interviews with The New Yorker at what they perceived to be a lack of interest in their accounts.

Deborah Ramirez, one of two women who have accused Kavanaugh of sexual abuse, said in an interview that she had been hopeful that her story would be investigated when two agents drove from Denver to Boulder, Colorado, last weekend to interview her at her lawyer’s office. But Ramirez said that she was troubled by what she perceived as a lack of willingness on the part of the Bureau to take steps to substantiate her claims. “I am very alarmed, first, that I was denied an F.B.I. investigation for five days, and then, when one was granted, that it was given on a short timeline and that the people who were key to corroborating my story have not been contacted,” Ramirez said. “I feel like I’m being silenced.”

Mayer and Farrow talked to a former classmate of Ramirez and Kavanaugh who corroborated her story.

Several former Yale students who claim to have information regarding the alleged incident with Ramirez or about Kavanaugh’s behavior at Yale said that they had not been contacted by the F.B.I. Kenneth G. Appold was a suitemate of Kavanaugh’s at the time of the alleged incident. He had previously spoken to The New Yorker about Ramirez on condition of anonymity, but he said that he is now willing to be identified because he believes that the F.B.I. must thoroughly investigate her allegation. Appold, who is the James Hastings Nichols Professor of Reformation History at Princeton Theological Seminary, said that he first heard about the alleged incident involving Kavanaugh and Ramirez either the night it occurred or a day or two later. Appold said that he was “one-hundred-per-cent certain” that he was told that Kavanaugh was the male student who exposed himself to Ramirez. He said that he never discussed the allegation with Ramirez, whom he said he barely knew in college. But he recalled details—which, he said, an eyewitness described to him at the time—that match Ramirez’s memory of what happened. “I can corroborate Debbie’s account,” he said in an interview. “I believe her, because it matches the same story I heard thirty-five years ago, although the two of us have never talked.”

Appold, who won two Fulbright Fellowships, and earned his Ph.D. in religious studies from Yale in 1994, also recalled telling his graduate-school roommate about the incident in 1989 or 1990. That roommate, Michael Wetstone, who is now an architect, confirmed Appold’s account and said, “it stood out in our minds because it was a shocking story of transgression.” Appold said that he initially asked to remain anonymous because he hoped to make contact first with the classmate who, to the best of his recollection, told him about the party and was an eyewitness to the incident. He said that he had not been able to get any response from that person, despite multiple attempts to do so. The New Yorker reached the classmate, but he said that he had no memory of the incident.

Please read the whole thing at the New Yorker.

The Washington Post: FBI background check of Kavanaugh appears to have been highly curtailed.

Slate: I Was Brett Kavanaugh’s College Roommate. He lied under oath about his drinking and terms in his yearbook, by James Roche.

In 1983, I was one of Brett Kavanaugh’s freshman roommates at Yale University. About two weeks ago I came forward to lend my support to my friend Deborah Ramirez, who says Brett sexually assaulted her at a party in a dorm suite. I did this because I believe Debbie.

Now the FBI is investigating this incident. I am willing to speak with them about my experiences at Yale with both Debbie and Brett. I would tell them this: Brett Kavanaugh stood up under oath and lied about his drinking and about the meaning of words in his yearbook. He did so baldly, without hesitation or reservation. In his words and his behavior, Judge Kavanaugh has shown contempt for the truth, for the process, for the rule of law, and for accountability. His willingness to lie to avoid embarrassment throws doubt on his denials about the larger questions of sexual assault. In contrast, I cannot remember ever having a reason to distrust anything, large or small, that I have heard from Debbie.

I did not want to come forward. When the New Yorker’s Ronan Farrow contacted me while researching a story about Debbie and Brett, I told him that I didn’t see the point. There is no way that Brett will face legal consequences after this much time. Either he will be confirmed or another conservative judge will be. There would be a high cost. I was raised in a Republican family. My mother, who has since passed away, was a Republican state representative in Connecticut. My father owns a MAGA hat. I have close friends who are very conservative. In recent years I have had disagreements over politics with some of these friends and family, but I care deeply about them. My involvement has and will come with personal, professional, and reputational damage.

Buzzfeed: The Kavanaugh Situation Has Opened Up A Portal Into Everyone’s Memory.

Jonathan Chait: Republicans Have Decided to Ignore All of Brett Kavanaugh’s Lies.

Just Security: Here Are the 30 People the FBI Needs to Interview in its Kavanaugh Investigation.

That’s all I’ve got. What stories are you following?

91 Comments on “Thursday Reads: Everything Trump Touches Turns to Sh*t”