← Wednesday Reads: “If you feel like your ex might show up at your house, me and my bat don’t mind staying over” bitches.
Monday Reads: Sex, Lies, and Republicans →

I’m confused. It’s not clear to me what written instructions the White House has given to the FBI for their supposed expanded background investigation of Brett Kavanaugh and the sexual assault accusations against him. So far agents have not interviewed either Kavanaugh or Christine Blasey Ford. It would seem that those interviews would provide a baseline for interviews with other witnesses. Until we see the written instructions, I don’t see how we can trust the Trump administration to do the right thing.

The New York Times is reporting that the investigation has been expanded from the original order to interview only four witnesses–Kavanaugh friends Mark Judge, P. J. Smyth, and Blasey Ford friend Leland Keyser; but they don’t seem to have any specifics about the required written instructions. Senator Diane Feinstein has sent a letter to White House Counsel Don McGahn asking for a copy of the directive he sent to the FBI, but so far she doesn’t seem to have received it.

The White House authorized the F.B.I. to expand its abbreviated investigation into sexual misconduct allegations against Judge Brett M. Kavanaugh by interviewing anyone it deems necessary as long as the review is finished by the end of the week, according to two people briefed on the matter.

At an event on Monday celebrating a new trade deal with Canada and Mexico, President Trump said he instructed his White House counsel, Donald F. McGahn II, over the weekend to instruct the F.B.I. to carry out an open investigation, but the president included the caveat that the inquiry should accommodate the desires of Senate Republicans. 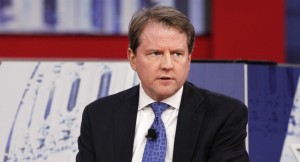 The new directive came after a backlash from Democrats, who criticized the White House for limiting the scope of the bureau’s investigation into Judge Kavanaugh, Mr. Trump’s nominee for the Supreme Court. The F.B.I. has already interviewed the four witnesses it was originally asked to question, and on Monday it reached out to others.

The broadening inquiry produced an unusual spectacle as friends and classmates from Judge Kavanaugh’s past provided dueling portraits of the nominee in his younger days — either a good-natured student incapable of the alleged behavior or a stumbling drunk who could easily have blacked out and forgotten inappropriate behavior at alcohol-soaked parties.

How far the F.B.I. will now delve into these questions beyond the original high school-era sexual assault allegation lodged by Christine Blasey Ford remained unclear. Senate Democrats sent the bureau a list of two dozen witnesses they insisted must be interviewed for an inquiry to be credible. Another accuser, Deborah Ramirez, has given the bureau the names of more than 20 people she said witnessed Judge Kavanaugh exposing himself to her during a college party or heard about it at the time or later, according to someone involved in the investigation.

It’s a long article, so check it out if you’re interested in more details.

Meanwhile, the media is moving much faster than the FBI on the Kavanaugh story. Two big reveals from yesterday–that Kavanaugh himself tried to short-circuit the New Yorker story about Deborah Ramirez and that he was involved in a violent drunken bar fight as a Yale student.

In the days leading up to a public allegation that Supreme Court nominee Brett Kavanaugh exposed himself to a college classmate, the judge and his team were communicating behind the scenes with friends to refute the claim, according to text messages obtained by NBC News.

Kerry Berchem, who was at Yale with both Kavanaugh and his accuser, Deborah Ramirez, has tried to get those messages to the FBI for its newly reopened investigation into the matter but says she has yet to be contacted by the bureau.

The texts between Berchem and Karen Yarasavage, both friends of Kavanaugh, suggest that the nominee was personally talking with former classmates about Ramirez’s story in advance of the New Yorker article that made her allegation public. In one message, Yarasavage said Kavanaugh asked her to go on the record in his defense. Two other messages show communication between Kavanaugh’s team and former classmates in advance of the story.

In now-public transcripts from an interview with Republican Judiciary Committee staff on September 25, two days after the Ramirez allegations were reported in the New Yorker, Kavanaugh claimed that it was Ramirez who was “calling around to classmates trying to see if they remembered it,” adding that it “strikes me as, you know, what is going on here? When someone is calling around to try to refresh other people? Is that what’s going on? What’s going on with that? That doesn’t sound — that doesn’t sound — good to me. It doesn’t sound fair. It doesn’t sound proper. It sounds like an orchestrated hit to take me out.”

The texts also demonstrate that Kavanaugh and Ramirez were more socially connected than previously understood and that Ramirez was uncomfortable around Kavanaugh when they saw each other at a wedding 10 years after they graduated. Berchem’s efforts also show that some potential witnesses have been unable to get important information to the FBI.

The New York Times: Kavanaugh Was Questioned by Police After Bar Fight in 1985.

As an undergraduate student at Yale, Brett M. Kavanaugh was involved in an altercation at a local bar during which he was accused of throwing ice on another patron, according to a police report.

The incident, which occurred in September 1985 during Mr. Kavanaugh’s junior year, resulted in Mr. Kavanaugh and four other men being questioned by the New Haven Police Department. Mr. Kavanaugh was not arrested, but the police report stated that a 21-year-old man accused Mr. Kavanaugh of throwing ice on him “for some unknown reason.”

A witness to the fight said that Chris Dudley, a Yale basketball player who is friends with Mr. Kavanaugh, then threw a glass that hit the man in the ear, according to the police report, which was obtained by The New York Times.

The report said that the victim, Dom Cozzolino, “was bleeding from the right ear” and was treated at a hospital. A detective was notified of the incident at 1:20 a.m.

The police report, which described the incident as an “assault,” is reproduced in the article.

Susan Collins is calling for the FBI to investigate the claims of Julie Swetnick, the third woman to come forward against Kavanugh. Portland Press Herald: Sen. Collins calls for FBI to investigate 3rd woman’s accusation in broader Kavanaugh probe.

Sen. Susan Collins wants the FBI to investigate the allegations brought by Julie Swetnick as part of the agency’s probe of Supreme Court nominee Brett Kavanaugh.

Collins and Republican Sens. Jeff Flake of Arizona and Lisa Murkowski of Alaska “advocated for the additional background investigation because she believed that it could help the senators evaluate the claims that have been brought to the Judiciary Committee,” Collins’ spokeswoman Annie Clark said in a statement to the Press Herald on Monday. “That would include the allegations that were brought by Julie Swetnick.”

Clark said FBI investigators “can determine whom they need to speak with and should follow appropriate leads. Senator Collins was encouraged by the President’s statements that he would give the FBI agents the latitude they need to do their work. It makes sense to start with the four named witnesses from the hearing and then the FBI can follow any leads that it believes need to be pursued, as Senators Flake, Murkowski, and Collins indicated at the time this agreement was made.”

There’s also breaking news this morning about the Stormy Daniels case. It’s behind the paywall at the Wall Street Journal, but here’s a report from Talking Points Memo: Trump Directed Son Eric To Oversee Restraining Order Against Stormy.

According to people familiar with the matter who spoke to the WSJ, Trump asked his then-lawyer Michael Cohen to get a restraining order against Daniels to keep her from discussing the details of her alleged affair with Trump, after he had learned that she planned to outline the alleged sexual encounter in a media interview. Trump asked Cohen to work with Eric Trump and another lawyer, who had previously worked with the President, to handle the legal work. Eric Trump then directed a Trump Organization lawyer to authorize the paperwork.

From Philip Bump at The Washington Post, a timeline of Trump’s attempted coverups of the Stormy story: The coverup uncovered: How Team Trump tried to bury or confuse the Stormy Daniels story.

One of the ironies at the heart of President Trump’s effort to hide an alleged sexual encounter in 2006 with adult-film actress Stormy Daniels is that, had the story emerged shortly before Election Day 2016, it’s not clear it would have done much damage. We say that in part because a hint of the story did come out before the election, and Trump won. We say it in part, too, because the emergence of the story after his inauguration nestled neatly into the well-worn grooves of public opinion in the Trump era: His supporters mostly wave it off while his opponents splutter with irritation.

But Trump, his campaign team, his administration and his private business all contributed to trying to bury the Daniels story. We keep learning new ways in which this coverup was constructed, with the addition Tuesday morning of a report in the Wall Street Journal indicating that Trump personally pushed earlier this year for a restraining order to be issued against Daniels.

That report runs contrary to comments from both the president and the Trump Organization, a conflict that, by now, is par for the course in the Daniels situation. But it’s still important to highlight, specifically because it reinforces the extent to which Trump and those around him tried to cover up and lie about something that, had another path been taken, might not have been a big deal at all.

Check out the cover up timeline at the WaPo.

The Washington Post: Dear dads: Your daughters told me about their assaults. This is why they never told you.

The Harvard Crimson: Kavanaugh Will Not Return to Teach at Harvard Law School.

Buzzfeed: Brett Kavanaugh’s Comments In That Hearing Raise Ethics Questions That Will Likely Follow Him Whether Or Not He’s Confirmed.

Forbes: How Trump Is Trying—And Failing—To Get Rich Off His Presidency.

Paul Krugman at The New York Times: The Angry White Male Caucus. Trumpism is all about the fear of losing traditional privilege.

The Washington Post: ‘The trauma for a man’: Male fury and fear rises in GOP in defense of Kavanaugh.