← We Need to Mess with Texas …
Wednesday Reads: OBL, Twisters and Homeless Kids → 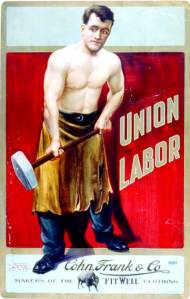 Wisconsin Governor Scott Walker’s war on public unions may cost the Republicans a few seats.  One positive sign is the out come of  a recent special election.

With 92 percent of precincts reporting, Doyle won 54 percent to 46 percent, based on unofficial results in Tuesday’s special election. The race flips a GOP Assembly seat for the Democrats, who remain in the minority.

The seat was previously held by Mike Huebsch, who Walker picked in January to serve as secretary of administration. Huebsch was first elected in 1994.

Will this be a harbinger of what will happen in the recall elections?  Many of those Republicans subjected to recall are in districts traditionally represented by Dems.  This sure looks like a backlash that could signal things to come.  Interestingly enough, this is also despite huge amounts of spending by corporations hiding behind ‘free speech’ political ads.

Doyle actually won despite “a barrage of television and radio attacks by third-party groups, along with 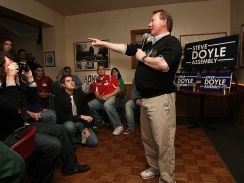 mailings from the Jobs First Coalition, a Brookfield, Wis.-based group tied to Scott Jensen, the former Republican state Assembly speaker who left office in 2002 amid misconduct allegations.” “I look at it as a rejection of attack ads,” he told the La Crosse Tribune.

CBS news reports that this is a basically rural district which has traditionally been represented by a Republican. There were other Republican gains in the election, however.

The race turned ugly in the last few weeks after outside interest group Jobs First Coalition sent out mailers claiming Doyle had not paid property taxes on time in 2009. Doyle and several others, including La Crosse County corporation counsel, confirmed the taxes were paid on time. The state Democratic Party has asked for a criminal investigation into the mailers.

The candidates’ main disagreement was over Walker’s bill to strip most public employees of collective bargaining rights. Doyle firmly opposed the move, while Lautz said it was needed to “get our fiscal house in order.”

“I heard a lot of comments at the door with regard to Gov. Walker,” Doyle said. “The people were in support of most of the goals, but definitely not at all the methods the governor had used. They’re looking for bipartisanship, not dictatorship.”

Despite losing the District 94 seat, Republicans managed to increase their majority in the state Assembly Tuesday night.

I’m still anxious for the recall elections.  I’m thinking it will be the best way to see if Walker’s ideas have support or not.  This is especially important giving the increasing unpopularity of the Tea Party.   A CNN poll in March showed that nearly half of voters have a negative view of the Tea Party and its candidates.

8 Comments on “Wisconsin! Send them Packing!”