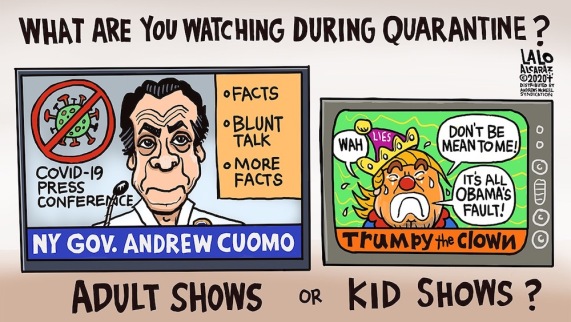 There were 884 deaths in the US in 24 hours, a new record, according to Johns Hopkins University, which has tracked virus figures globally.

The latest victims include a six-week-old baby. More than 216,000 are now infected, the world’s highest figure.

Reserves of protective equipment and medical supplies are almost exhausted.

This has left the federal government and individual US states competing for safety gear, while the unprecedented demand has led to profiteering, officials in the Department for Homeland Security were quoted by the Washington Post as saying.

The Trump administration says it can acquire adequate supplies, and has $16bn (£13bn) available to do so. State and local officials have complained about insufficient protective equipment such as masks and gowns as well as ventilators, needed to help keep patients breathing….

The number of confirmed infections across the US rose by more than 25,000 in one day. The worst-hit place is New York City, where nearly 47,500 people have tested positive and more than 1,300 have died.

The response to this horror from the Trump administration is still weak and ineffectual.

A New England Patriots plane full of much-needed personal protective equipment from China is to fly into Boston on Thursday afternoon, according to a source familiar with the plans.

Gov. Charlie Baker will greet the National Football League team’s plane when it arrives at Logan Airport with Patriots owner Bob Kraft and Lt. Gov. Karyn Polito. From there, the state’s National Guard will transport the equipment to a strategic stockpile in Marlboro, Mass., according to the person familiar with the plans.

There are 7,738 confirmed coronavirus cases in Massachusetts, and more than a thousand of those cases were reported on Wednesday — the largest spike the state has seen so far. To date, 122 people have died from the virus, and the state has conducted more than 51,000 tests. The state converted an arena in Worcester, Mass., into a 250-bed field hospital Wednesday as it prepares for an influx in patients, and is eyeing a Boston convention center as another possible hospital site.

For weeks, Baker has warned that Massachusetts is in desperate need of more protective equipment including masks, sanitizing wipes and gowns for health care workers on the front lines of the coronavirus crisis, especially as cases are expected to surge sometime between April 7 and April 17 in Massachusetts.

The Republican governor has raised those concerns with Trump. He told the president the federal government was outbidding Massachusetts on equipment — even after advising states to work on getting their own supplies. A week later, the Bay State was still being outbid and had only received a fraction of what it requested from the Strategic National Stockpile.

According to my local news source The Arlington Patch, there are 1.2 million N95 masks on the plane. An additional 500,000 wouldn’t fit and will be delivered on another flight.

Team owner Robert Kraft and his family paid $2 million, about half the cost, for the masks, which are a crucial piece of personal protection equipment needed on the front lines in the fight against the coronavirus.

The National Guard will bring the masks from the plane to a Marlboro stockpile, Politico reported. Some 300,000 masks will then be sent to New York, which is being overwhelmed by the pandemic.

While I’m glad that local doctors and nurses will soon have better protection from the virus, this story highlights a serious problem with Trump’s disorganized “strategy” for dealing with the pandemic. The Los Angeles Times: As Trump lets private sector supply the coronavirus fight, the well-connected often get first dibs.

As hospitals, doctors and state and local governments race for masks, ventilators and other medical supplies with little coordination by the Trump administration, the well-connected are often getting to the front of the line.

An outpouring of corporate and philanthropic support has funneled badly needed supplies to combat the coronavirus to well-known institutions such as Cedars-Sinai and UCLA medical centers in Los Angeles and the UC San Francisco Medical Center.

But in the absence of an overall nationwide distribution plan, many smaller hospitals, nursing homes and physicians are being left behind, especially those who lack relationships with suppliers, ties to wealthy donors or the money to buy scarce equipment at a time when prices on the open market are skyrocketing.

While the spread of the novel coronavirus has been aggressive around the world, much of the profound impact it will have here in the United States was preventable. As the American public braces itself for the worst of this crisis, it’s worth remembering that the reach of the virus here is not attributable to an act of God or a foreign invasion, but a colossal failure of leadership.

The outbreak that began in China demanded a White House that could act swiftly and competently to protect public health, informed by science and guided by compassion and public service. It required an administration that could quickly deploy reliable tests around the nation to isolate cases and trace and contain the virus’s spread, as South Korea effectively did, as well as to manufacture and distribute scarce medical supplies around the country. It begged for a president of the United States to deliver clear, consistent, scientifically sound messages on the state of the epidemic and its solutions, to reassure the public amid their fear, and to provide steady guidance to cities and states. And it demanded a leader who would put the country’s well-being first, above near-term stock market returns and his own reelection prospects, and who would work with other nations to stem the tide of COVID-19 cases around the world.

What we have instead is a president epically outmatched by a global pandemic. A president who in late January, when the first confirmed coronavirus case was announced in the United States, downplayed the risk and insisted all was under control. A president who, rather than aggressively test all those exposed to the virus, said he’d prefer not to bring ashore passengers on a contaminated cruise ship so as to keep national case numbers (artificially) low. A president who, consistent with his mistrust and undermining of scientific fact, has misled the public about unproven cures for COVID-19, and who baited-and-switched last week about whether the country ought to end social distancing to open up by Easter, and then, on Saturday, about whether he’d impose a quarantine on New York, New Jersey, and Connecticut. A president who has pledged to oversee the doling out of the $500 billion in corporate bailout money in the latest stimulus package, some of which will go to the travel industry in which his family is invested. A president who spent a good chunk of a recent press conference complaining about how hard it is for a rich man to serve in the White House even as Americans had already begun to lose their jobs, their health care, and their lives. A president who has reinforced racial stigma by calling the contagion a “Chinese virus” and failed to collaborate adequately with other countries to contain their outbreaks and study the disease. A president who evades responsibility and refuses to acknowledge, let alone own, the bitter truth of National Institutes of Health scientist Dr. Anthony Fauci’s testimony: that the country’s testing rollout was “a failing.”

Read the whole thing at the Globe. It appears they have finally made their coronavirus stories free to the public.

Now Trump is making his failure look far worse by claiming he knew all along the situation with be this bad. Amber Phillips at The Washington Post: Trump now says he knew the virus ‘could be horrible’ when he was saying things like ‘it’s going to disappear.’

Now that the president seems to have come around to the gravity of the health crisis, what does he think about his weeks of downplaying a virus he now says is serious? What about not advising social distancing weeks earlier, even though there is widespread agreement among public health experts that Americans should have been isolating sooner than mid-March?

CNN’s Jim Acosta asked Trump those questions repeatedly Tuesday. On this front, Trump had not changed: He was unwilling to admit error.

Let’s start with Trump downplaying the virus. Acosta asked him: “Is there any fairness to the criticism that you may have lulled Americans into a false sense of security? When you were saying things like it’s going to go away and that sort of thing?”

Trump’s answer basically came down to: He did not want to deliver the bad news about how serious the virus could be. What’s more, he said he knew ahead of time it could be this bad (or even worse, killing millions with no government intervention whatsoever), but he did not want to tell Americans that at the time.

Unbelievable. More from Jim Acosta at CNN: Source close to coronavirus task force: Despite what White House is saying, tougher measures implemented earlier ‘might have made a difference.’

Despite White House claims that President Donald Trump and the administration did everything right in response to the coronavirus, a source close to the task force said tougher social distancing measures implemented earlier in the pandemic could have blunted the severity of the current crisis.

It all depends, the source said, whether there were coronavirus infections in the US that were going undetected during the initial weeks of the outbreak, when the Trump administration was falling behind on testing for the virus nationwide. 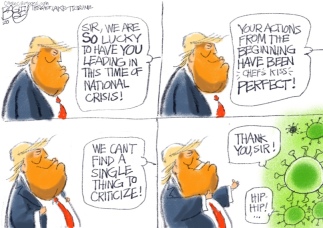 A Trump adviser working with White House officials on messaging for the pandemic response said Trump “took a gamble” that warmer weather would cause the virus to dissipate, siding with aides who were pushing back on the dire warnings coming from doctors on the coronavirus task force.

Some important stories, links only:

The Nation: Exclusive: The Military Knew Years Ago That a Coronavirus Was Coming.

The Daily Beast: Army Warned in Early February That Coronavirus Could Kill 150,000 Americans.

The New York Times: A Ventilator Stockpile, With One Hitch: Thousands Do Not Work.

Jonathan Chait at New York Magazine: Republicans: ‘Nobody Expected’ the Coronavirus Pandemic. So Joe Biden Is Nobody?

The Washington Post: Anthony Fauci’s security is stepped up as doctor and face of U.S. coronavirus response receives threats.

The Daily Beast: Trump Literally Laughed at How He Can Game the Press With His ‘New Tone’