← Sunday Reads: Move On Up
Frankly over it all Friday Reads → 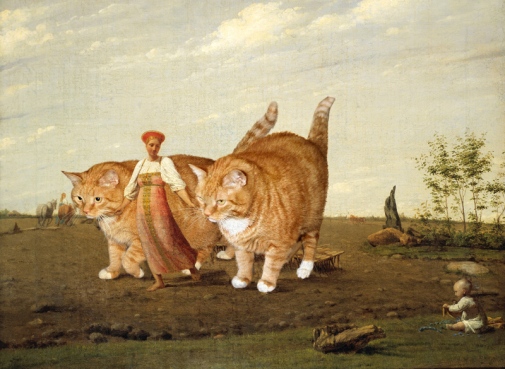 Aleksey Venetsianov, In the ploughed field. Spring. Cats at work

Today’s images are from an old favorite, Svetlana Petrova, the Russian artist who incorporates her ginger cat Zarathustra into iconic paintings.

Today’s news is less charming. As the world faces the possibility of a global pandemic, Trump has decided on a coronvirus strategy–calling it a “hoax.”

Politico: Trump rallies his base to treat coronavirus as a ‘hoax.’

NORTH CHARLESTON, S.C. — President Donald Trump on Friday night tried to cast the global outbreak of the coronavirus as a liberal conspiracy intended to undermine his first term, lumping it alongside impeachment and the Mueller investigation.

He blamed the press for acting hysterically about the virus, which has now spread to China, Japan, South Korea, Iran, Italy and the U.S, and he downplayed its dangers, saying against expert opinion it was on par with the flu.

“The Democrats are politicizing the coronavirus. They’re politicizing it,” he said. “They don’t have any clue. They can’t even count their votes in Iowa. No, they can’t. They can’t count their votes. One of my people came up to me and said, ‘Mr. President, they tried to beat you on Russia, Russia, Russia.’ That did not work out too well. They could not do it. They tried the impeachment hoax.”

Then Trump called the coronavirus “their new hoax.”

He also tried to link the virus to immigration. The Guardian:

Donald Trump attempted to link the coronavirus outbreak to Democratic immigration policies, labeling Democratic attacks on his handling of the crisis a “new hoax” in a rambling speech in South Carolina, the night before the state’s crucial Democratic primary….

“Whether it’s the virus that we’re talking about, or the many other public health threats, the Democrat policy of open borders is a direct threat to the health and wellbeing of all Americans.”

Trump cited no evidence to link the virus with migration at the southern border, where he has focused much of his anti-immigration policy. The first case of coronavirus in the US with no known origin was diagnosed in northern California on Wednesday night, hundreds of miles from the border. Additional such cases in California and Oregon were confirmed on Friday.

Two new and unexplained cases of coronavirus emerged in Northern California and in Oregon on Friday, and health officials in both states quickly moved to contact people who might have been exposed. Experts warned that the cases could indicate signs of spread within the United States.

Oregon health officials said they had identified a school employee in the Portland area who appears to have contracted the coronavirus more than a week ago. The patient, who had not recently traveled to China, has had symptoms since Feb. 19 and may have exposed students and staff at a school in Clackamas County, officials said.

Oregon’s announcement followed one earlier Friday in Santa Clara County, Calif., where officials said a patient with no known risk factors had tested positive for the virus.

The findings hint that the coronavirus may already be circulating locally in the United States, passing from person to person.

According to OregonLive, the elementary school where an employee tested positive for the disease has been closed temporarily while the health authorities investigate.

More details from The Washington Post: Coronavirus is spreading through three more communities on the West Coast.

California reported its second case of community transmission of the coronavirus Friday, and Oregon and Washington announced others just hours later, providing fresh evidence that the deadly virus is circulating in the United States.

Authorities in Santa Clara County, Calif., said a 65-year-old woman had come down with the covid-19 disease without traveling to any countries hit hard by the outbreak or coming in contact with anyone known to have the infection.

In Oregon, officials said a person from Washington County, in the northwest part of the state, had tested positive under similar circumstances. The positive test was conducted by the state’s laboratory and is considered “presumptive” until it is confirmed by the federal Centers for Disease Control and Prevention.

The unnamed Oregon individual spent time in an elementary school outside Portland and may have exposed students and staff there, state health authorities said. The school was ordered closed through Wednesday for cleaning, a local television station reported.

The Jackson High School student was not in school most of this week, but was on campus briefly Friday morning, according to a statement from Everett Public Schools. Students who were in contact with the patient will remain home for 14 days while health authorities monitor their symptoms, and the school will close for three days, the school district said.

The developments mean the virus is spreading in at least four separate communities — two of them about 90 miles apart in California, and two others farther up the West Coast.

This is just the beginning folks. And the Trump administration enabled the spread of the virus with its ho hum response to a health crisis. Michael Daly at The Daily Beast: Trump Didn’t Just Botch the Coronavirus Response. He Enabled Its Spread.

Even as China was announcing that its deaths from the novel coronavirus had surpassed its toll from SARS, President Donald Trump released a proposed budget for 2021 that slashed funding for our chief defender against epidemics by 18 percent.

Within the overall proposed cuts detailed on Feb. 10 for the Centers for Disease Control and Prevention was a reduction in spending to guard against “emerging and zoonotic diseases” from $635,772,000 to $550,464,000.

Zoonotic diseases are those that have crossed from animals to humans, as the novel coronavirus is believed to have done….

We might have had earlier warning of the outbreak, but previous budget cuts caused the CDC to end its global security program in China in 2017.

In another failure of foresight two years ago, the White House eliminated the National Security Council’s position for combating global health crises. The NSC’s Senior Director for Global Health Security and Biothreats post was held by the highly regarded Rear Admiral Tim Ziemer—whose sudden departure in May of 2018 happened to coincide with a new Ebola outbreak in Africa.

Also check out this piece at ProPublica: Key Missteps at the CDC Have Set Back Its Ability to Detect the Potential Spread of Coronavirus.

As the highly infectious coronavirus jumped from China to country after country in January and February, the U.S. Centers for Disease Control and Prevention lost valuable weeks that could have been used to track its possible spread in the United States because it insisted upon devising its own test.

The federal agency shunned the World Health Organization test guidelines used by other countries and set out to create a more complicated test of its own that could identify a range of similar viruses. But when it was sent to labs across the country in the first week of February, it didn’t work as expected. The CDC test correctly identified COVID-19, the disease caused by the virus. But in all but a handful of state labs, it falsely flagged the presence of the other viruses in harmless samples.

As a result, until Wednesday the CDC and the Food and Drug Administration only allowed those state labs to use the test — a decision with potentially significant consequences. The lack of a reliable test prevented local officials from taking a crucial first step in coping with a possible outbreak — “surveillance testing” of hundreds of people in possible hotspots. Epidemiologists in other countries have used this sort of testing to track the spread of the disease before large numbers of people turn up at hospitals.

Read the rest at ProPublica. 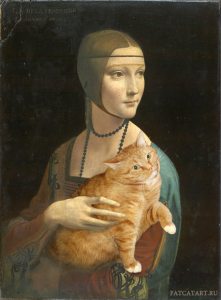 Lady with an Ermine’ by Leonardo da Vinci

That’s not all, of course. The Trump administration decided–against the advice of the CDC–to bring back Americans who had been exposed to the virus cruise ship in Japan and then they sent HHS workers with no protective clothing and no training to receive these people at U.S. air bases in California. Some of those workers then went out into the community, to hotels, and even commercial flights.

From today’s Washington Post: DHS employee told to report to work in Newark after China travel, in violation of coronavirus quarantine, complaints say.

A Department of Homeland Security employee who returned from travel to China was told by her supervisor to report to her workplace in early February in apparent violation of a mandatory 14-day coronavirus quarantine period, according to complaints filed Friday by the union that represents the woman’s co-workers.

The DHS employee, who was not identified, works for U.S. Citizenship and Immigration Services in Newark, according to the complaint. After arriving from China, she called a supervisor to ask if she should remain at home under quarantine, but she was told to report to work Feb. 10, according to Ward Morrow, an attorney for the American Federation of Government Employees, which represents USCIS employees.

Can you tell I’m obsessed with the coronavirus story? There’s also a primary today in South Carolina. I’ll be keeping an eye on that too.

What stories are you following today? This is a wide open thread.