← Friday Shock and Awe Reads: Tilt-Shifting the Trumpist Regime
Wednesday Reads: Nice Country You Got There… →

Acting Director of National Intelligence Joseph Maguire is testifying before the House Intelligence Committee this morning. Maguire has given his opening statement and the questioning has begun. At about 8:30, the whistleblower complaint was released to the public. You can read it here.

So far Maguire is working pretty hard to obfuscate Adam Schiff’s questions, but he has admitted that he first took the complaint to the White House counsel’s office for advice. He keeps claiming that he can’t violate executive privilege but he also admits that the “president” has not asserted executive privilege. Next he went to the DOJ even though Bill Barr is specifically mentioned in the whistleblower complaint as likely being involved in Trump’s wrongdoing!

The Washington Post: Whistleblower claimed Trump abused his office and that White House officials tried to cover it up.

The whistleblower complaint at the heart of the burgeoning controversy over President Trump’s call with the Ukrainian president claims not only that the president misused his office for personal gain and endangered national security but that unidentified White House officials tried to hide that conduct.

“In the course of my official duties, I have received information from multiple U.S. government officials that the President of the United States is using the power of his office to solicit interference from a foreign country in the 2020 U.S. election,” the whistleblower wrote in the complaint dated Aug. 12. The House Intelligence Committee released the document Thursday morning. 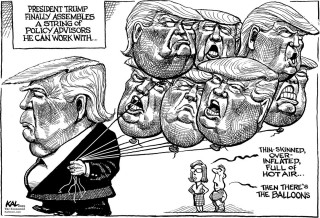 “This interference includes, among other things, pressuring a foreign country to investigate one of the President’s main domestic political rivals. The President’s personal lawyer, Mr. Rudolph W. Giuliani, is a central figure in this effort. Attorney General (William P.) Barr appears to be involved as well,” the complaint states.

In that phone call, Trump pressed President Volodymyr Zelensky to investigate Joe Biden, one of his chief political rivals, and Biden’s son Hunter — offering to enlist Barr’s help in that effort while dangling a possible visit to the White House, according to a rough transcript of the call released by the White House on Wednesday.

President Trump used the power of his office to try to get Ukraine to interfere in the 2020 election to investigate a political rival “for personal gain,” according to an explosive whistle-blower complaint released on Thursday after days of damning revelations about Mr. Trump’s dealings with Ukraine. 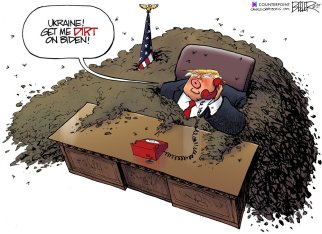 In addition, the complaint says that whistle-blower, an unidentified intelligence officer, learned from multiple American officials that “senior White House officials had intervened to ‘lock down’ all records of the phone call, especially the official word-for-word transcript of the call that was produced as is customary by the White House Situation Room.”

“This set of actions underscored to me that White House officials understood the gravity of what had transpired in the call,” the complaint said.

The whistle-blower’s complaint was based on accounts from multiple White House officials who were “deeply disturbed” by what they heard on the call, the complaint said.

Read more at the link above.

Long before the July 25 call with the new Ukrainian president that helped spur the formal start of impeachment proceedings against him in the House, Mr. Trump fretted and fulminated about the former Soviet state, angry over what he sees as Ukraine’s role in the origins of the investigations into Russian influence on his 2016 campaign.

His fixation was only intensified by his hope that he could employ the Ukrainian government to undermine his most prominent potential Democratic rival in 2020, former Vice President Joseph R. Biden Jr. 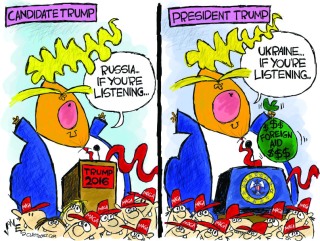 And Mr. Trump has put the powers of his office behind his agenda: He has dispatched Vice President Mike Pence and top administration officials with thinly veiled messages about heeding his demands about confronting corruption, which Ukrainian and former American officials say is understood as code for the Bidens and Ukrainians who released damaging information about the Trump campaign in 2016. This summer he froze a package of military assistance to Ukraine even as the country, eager to build closer relations with Washington, continued to be menaced by its aggressive neighbor Russia.

HuffPost: Donald Trump Actually Has 2 Whistleblowers To Worry About.

…there’s another whistleblower ― one with possible evidence that Trump tried to corrupt an Internal Revenue Service audit of his personal tax returns ― who has received relatively little attention.

The tax whistleblower…went straight to Congress ― specifically to the House Ways and Means Committee, which had sued the Trump administration for refusing to provide copies of the president’s tax returns in response to a formal request. Democrats say they need Trump’s returns to make sure the IRS properly enforces tax laws against the president. 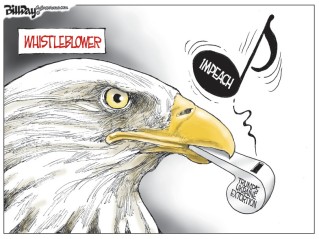 But Ways and Means Chair Richard Neal (D-Mass.) is far less outspoken than Schiff, and his approach to the tax case has been cautious. He decided to stay focused on the lawsuit, using the whistleblower’s material to bolster that case.

In a brief last month, the committee told the U.S. District Court for the District of Columbia that a “federal employee” had approached them with “evidence of possible misconduct” and “inappropriate efforts” to influence an IRS audit of the president. The document provided no further detail about the whistleblower, but in a footnote, Democrats offered to tell U.S. District Judge Trevor McFadden all about it in private.

A spokesman for the committee said this week that McFadden, a Trump nominee who donated to the Trump 2016 campaign and volunteered for the Trump presidential transition, has so far not asked to hear more about the whistleblower. He denied a Democratic motion to speed up the case.

This one is really interesting. I hope you’ll read the whole thing by Murray Waas at the New York Review of Books: Trump, Giuliani, and Manafort: The Ukraine Scheme.

The effort by President Trump to pressure the government of Ukraine to investigate former Vice President Joe Biden and his son had its origins in an earlier endeavor to obtain information that might provide a pretext and political cover for the president to pardon his former campaign chairman, Paul Manafort, according to previously undisclosed records.

These records indicate that attorneys representing Trump and Manafort respectively had at least nine conversations relating to this effort, beginning in the early days of the Trump administration, and lasting until as recently as May of this year. Through these deliberations carried on by his attorneys, Manafort exhorted the White House to press Ukrainian officials to investigate and discredit individuals, both in the US and in Ukraine, who he believed had published damning information about his political consulting work in the Ukraine. A person who participated in the joint defense agreement between President Trump and others under investigation by Special Counsel Robert Mueller, including Manafort, allowed me to review extensive handwritten notes that memorialized conversations relating to Manafort and Ukraine between Manafort’s and Trump’s legal teams, including Trump’s personal attorney, Rudy Giuliani.

These new disclosures emerge as House Speaker Nancy Pelosi announced on Tuesday that the House would open a formal impeachment inquiry into President Trump’s conduct. What prompted her actions were the new allegations that surfaced last week that Trump had pressured Ukraine’s newly elected president, Volodymyr Zelensky, to investigate Trump’s potential 2020 campaign rival, Biden, and his son Hunter, placing a freeze on a quarter of a billion dollars in military assistance to Ukraine as leverage. The impeachment inquiry will also examine whether President Trump obstructed justice by attempting to curtail investigations by the FBI and the special counsel into Russia’s covert interference in the 2016 presidential election in Trump’s favor.

New information in this story suggests that these two, seemingly unrelated scandals, in which the House will judge whether the president’s conduct in each case constituted extra-legal and extra-constitutional abuses of presidential power, are in fact inextricably linked: the Ukrainian initiative appears to have begun in service of formulating a rationale by which the president could pardon Manafort, as part of an effort to undermine the special counsel’s investigation.

Jonathan Chait at New York Magazine: The Ukraine Scandal Is Not One Phone Call. It’s a Massive Plot.

On July 25, President Trump held a phone call in which he repeatedly leaned on Ukrainian president Volodymyr Zelensky to investigate Joe Biden and Paul Manafort’s prosecutors. The episode is so blatantly inappropriate even Trump’s most fervent apologists are, with a few exceptions, having trouble defending it. What they are trying to do, instead, is define this phone call as the entire scandal. Trump emphasizes that he “didn’t specifically mention the explicit quid pro quo” of military aid in return for the investigation.

That is true, as far as it goes. The quid pro quo in the call, though perfectly apparent, is mostly implicit. But the real trick in Trump’s defense is framing the call as the entire scandal. The scandal is much more than that. The call is a snapshot, a moment in time in a months-long campaign that put American policy toward Ukraine at the disposal of Trump’s personal interests and reelection campaign.

Last spring, Rudy Giuliani was openly pressuring Kiev to investigate Joe Biden. Giuliani told the New York Times, “We’re meddling in an investigation … because that information will be very, very helpful to my client.” The key word there was “we’re.” The first-person plural indicated Giuliani was not carrying out this mission alone. A series of reports have revealed how many other government officials were involved in the scheme.

Susan Glasser at The New Yorker: “Do Us a Favor”: The Forty-eight Hours That Sealed Trump’s Impeachment.

Neal Kaytal at The New York Times: Trump Doesn’t Need to Commit a Crime to Be Kicked Out of Office.