Having a childish, incompetent madman in charge of the government is so exhausting. How much more of this can we take? Today, Donnie is headed for the Texas border with Mexico to do something or other. Who knows what insane gibberish will spew from his deformed lips. All I know for sure is that it won’t make sense.

Donnie has been touting his “steel slat” fence for the past week, but guess what? Those slats can be cut through with a common household saw.

NBC News: Test of steel prototype for border wall showed it could be sawed through.

President Donald Trump has repeatedly advocated for a steel slat design for his border wall, which he described as “absolutely critical to border security” in his Oval Office address to the nation Tuesday. But Department of Homeland Security testing of a steel slat prototype proved it could be cut through with a saw, according to a report by DHS.

A photo exclusively obtained by NBC News shows the results of the test after military and Border Patrol personnel were instructed to attempt to destroy the barriers with common tools.

The Trump administration directed the construction of eight steel and concrete prototype walls that were built in Otay Mesa, California, just across the border from Tijuana, Mexico. Trump inspected the prototypes in March 2018. He has now settled on a steel slat, or steel bollard, design for the proposed border barrier additions. Steel bollard fencing has been used under previous administrations.

However, testing by DHS in late 2017 showed all eight prototypes, including the steel slats, were vulnerable to breaching, according to an internal February 2018 U.S. Customs and Border Protection report.

Photos of the breaches were not included in a redacted version of the CBP report, which was first obtained in a Freedom of Information Act Request by San Diego public broadcaster KPBS.

Gail Collins mocks Donnie’s wall obsession at The New York Times: Trump Hits the Wall. And what’s all that sniffling about?

We need to look at the bright side of Donald Trump’s border wall fixation.

Sure, he’s shut down the government and thrown the nation into chaos. But it could be worse. He could be demanding a fiery moat between us and Canada. Or building a 36,000-foot-deep barrier across the Pacific Ocean to drive home his commitment to tariffs.

Maybe all this wall obsessing makes Trump tired. He certainly seemed low-energy during his Oval Office address. “He makes Jeb Bush look like a combination of Mighty Mouse and Bruce Springsteen,” a friend of mine said after the president finished his nine-minute speech to the American people. 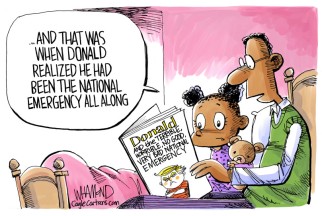 For every viewer whose response to the talk was “Wow, we should do something about immigration!” there must have been a hundred whose first reaction was “Why does this man keep sniffing?” Deviated septum? Nasal polyps? Trump’s breathing has actually sounded strange for a long time, but most of us have chosen to ignore it rather than engage in a national conversation about the president’s nose.

If you watched the address — and really, you could have, it was only about as long as it takes to microwave popcorn — you saw a 72-year-old guy squinting at the teleprompter and making rather alarming breathing sounds while reading a speech about how we need a wall to protect women who are “sexually assaulted on the dangerous trek up through Mexico.”

This is not a man who should wrap his arguments around the idea of protecting women from sexual assault. But also, gee, he sounded like Uncle Fred who you haven’t seen for a while and suddenly he shows up for Thanksgiving with weird colored hair and vacant eyes and he’s talking into his mashed potatoes.

Back doing weekly animated @thetimes cartoons! Should be up soon, but in the meantime, here's a little taster -> #TrumpAddress #TrumpShutdown pic.twitter.com/P026QIy4hL

As the Trump shutdown continues, the administration has been giving tone-deaf advice to government employees who are going without pay.

The Washington Post: Coast Guard families told they can have garage sales to cope with government shutdown.

Employees of the U.S. Coast Guard who are facing a long U.S. government shutdown just received a suggestion: To get by without pay, consider holding a garage sale, babysitting, dog-walking or serving as a “mystery shopper.”

The suggestions were part of a five-page tip sheet published by the Coast Guard Support Program, an employee-assistance arm of the service often known as CG SUPRT. It is designated to offer Coast Guard members help with mental-health issues or other concerns about their lives, including financial wellness.

“Bankruptcy is a last option,” the document said.

The Coast Guard receives funding from the Department of Homeland Security and is subjected to the shuttering of parts of the government along with DHS’s other agencies. That stands in contrast to other military services, which are part of the Defense Department and have funding.

This is interesting, from Buzzfeed News: ICE Might Be Violating Federal Law By Keeping Immigrants Detained During The Shutdown.

A lengthy government shutdown over border wall funding has potentially put Immigration and Customs Enforcement at risk of violating a more than 100-year-old law that could not only require the release of “non-dangerous” individuals in the agency’s custody but also stop it from continuing to arrest and detain certain people, according to former senior ICE officials and experts. 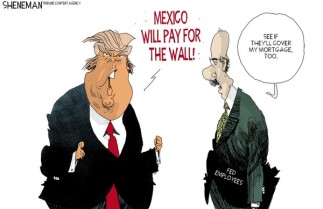 The potential violation could complicate ICE’s operations at a time when President Donald Trump has argued that the shutdown is necessary to force Democrats to implement tougher immigration policies, such as building a wall on the US–Mexico border.

ICE contracts with nonfederal detention facilities, like county jails and private detention contractors, across the country to hold individuals detained by immigration agents. The agency pays for the bed space in various ways, including monthly payments or, in some cases, in advance.

As of Jan. 1, the agency was detaining more than 48,000 individuals, which is 8,000 more than the levels that had been provided for by the now-expired congressional funding. But nearly three weeks after its funding lapsed because of the shutdown, ICE has likely run out of money to pay contractors for the detention space it uses.

And while ICE has some non-appropriated funds it can lean on, those are not enough to pay for the overall detention space for more than a few weeks, said Kevin Landy, who was appointed during the Obama administration to run ICE’s Office of Detention Policy and Planning, a position he held for more than six years, up until 2017.

In other news, Kamala Harris is close to announcing a run for president in 2020. 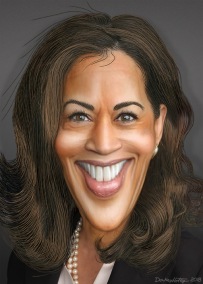 Sen. Kamala Harris has decided to run for president in 2020 and will announce her candidacy on or around Martin Luther King Jr. Day, probably at a campaign rally in Oakland, sources close to the freshman senator from California tell KCBS Radio.

Harris, 54, has been making the rounds of television talk shows and appearing at several events this week as part of a brief tour to promote her new book, “The Truths We Hold: An American Journey.”

At every stop, when asked about running for president, Harris has answered with some variation of “I’m not ready yet” to announce her decision, citing family considerations. But several sources knowledgeable about her plans say she is ready, and has in fact decided to run, with the enthusiastic blessing of her husband and two stepchildren.

The debate within her camp is how, and where, to launch her campaign. The tentative plan is for Harris to enter the race for the Democratic presidential nomination with a campaign rally, most likely in Oakland, where she was born and began her legal career.

On the final night of the Democratic National Convention in July of 2016, Bernie Sanders’ staffers went out to a Mediterranean restaurant and hookah bar in Center City Philadelphia to celebrate and mourn the end of the campaign.

Sitting at the bar sometime after midnight, convention floor leader Robert Becker—who oversaw Sanders’ Iowa campaign, then helped lead his efforts in Michigan, California, and New York as deputy national field director—began talking with a female staffer who had worked under him along with her boyfriend.

Becker, now 50 years old, told the 20-something woman that he had always wanted to have sex with her and made a reference to riding his “pole,” according to the woman and three other people who witnessed what happened or were told about it shortly afterward by people who did. Later in the night, Becker approached the woman and abruptly grabbed her wrists. Then he moved his hands to her head and forcibly kissed her, putting his tongue in her mouth as he held her, the woman and other sources said.

The woman said she didn’t come forward at the time, because Sanders’ campaign was over. But when she was recently contacted by Becker about 2020 the women felt she had to speak up.

“Candidates who allow people like Robert Becker to lead their organizations shouldn’t earn the highest office in our government,” said the woman, who was granted anonymity because she feared retaliation from supporters of Sanders and Becker, who has a loyal following of his own.

“It just really sucks because no one ever held him accountable and he kept pushing and pushing and seeing how much he could get away with. This can’t happen in 2020. You can’t run for President of the United States unless you acknowledge that every campaign demands a safe work environment for every employee and volunteer.”