← Sunday Reads: Drawn a Blank
Friday Reads: The NAZI Kleptocracy Pogrom brought to you by the Oligarchs and Trump-Billies → 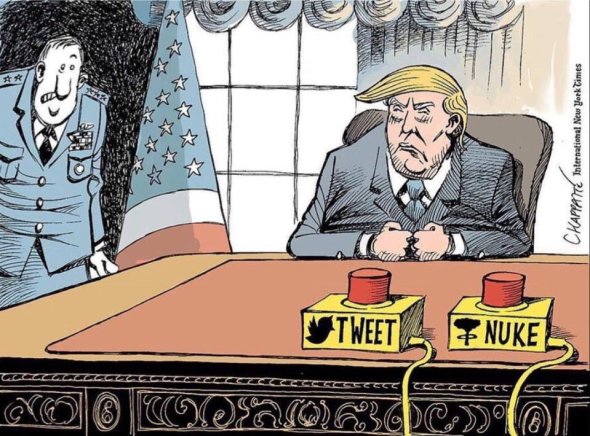 Yesterday I spent the afternoon and evening with my brother’s family–they invited me for a birthday dinner and family movie. Unsurprisingly, while I wasn’t paying attention for a few hours the president-elect did massive damage to U.S. foreign policy, overturning decades-long policies on China. And it appears this wasn’t about policy but about enriching the #tRump family business.

Ann Gearan at The Washington Post: Trump speaks with Taiwanese president, a major break with decades of U.S. policy on China

President-elect Donald Trump spoke Friday with Taiwan’s president, a major departure from decades of U.S. policy in Asia and a breach of diplomatic protocol with ramifications for the incoming president’s relations with China.

The call is the first known contact between a U.S. president or president-elect with a Taiwanese leader since before the United States broke diplomatic relations with the island in 1979. China considers Taiwan a province, and news of the official outreach by Trump is likely to infuriate the regional military and economic power.

The exchange is one of a string of unorthodox conversations with foreign leaders that Trump has held since his election. It comes at a particularly tense time between China and Taiwan, which earlier this year elected a president, ­­­Tsai Ing-wen, who has not endorsed the notion of a unified China. Her election angered Beijing to the point of cutting off all official communication with the island government.

It is not clear whether Trump intends a more formal shift in U.S. relations with Taiwan or China. On the call, Trump and Tsai congratulated each other on winning their elections, a statement from Trump’s transition office said….

A statement from the Taiwanese president’s office said the call lasted more than 10 minutes and included discussion of economic development and national security, and about “strengthening bilateral relations.”

Trump claimed the call was initiated by Taiwan’s president, but that was a lie, NBC News reports:

BEIJING — A phone call between Donald Trump and Taiwan’s leader that risks damaging relations between the U.S. and China was pre-arranged, a top Taiwanese official told NBC News on Saturday.

Trump — who lambasted China throughout the election campaign and promised to slap 45 percent tariffs on Chinese goods — tweeted that Taiwanese President Tsai Ing-wen had called him.

The President of Taiwan CALLED ME today to wish me congratulations on winning the Presidency. Thank you!

He added that the call had not been a surprise.

Apparently the call was carefully planned and scheduled by Trump staffers. It was also reported that bomb-thrower John Bolton was seen at Trump tower yesterday. Could he have helped instigate this?

Interesting how the U.S. sells Taiwan billions of dollars of military equipment but I should not accept a congratulatory call.

China was apparently on the phone with the White House right after the news broke, and they have now filed a complaint with the U.S. about this breach of diplomacy. The Guardian:

China has lodged “solemn representations” with the US over a call between the president-elect, Donald Trump, and Taiwan’s leader, Tsai Ing-wen.

Trump looked to have sparked a potentially damaging diplomatic row with Beijing on Friday after speaking to the Taiwanese president on the telephone….

The US closed its embassy in Taiwan – a democratically ruled island which Beijing regards as a breakaway province – in the late 1970s after the historic rapprochement between Beijing and Washington that stemmed from Richard Nixon’s 1972 trip to China.

Since then the US has adhered to the “One China” principle, which officially considers the independently governed island to be part of the same single Chinese nation as the mainland.

Geng Shuang, a spokesman for China’s foreign ministry, said in a statement on Saturday: “It must be pointed out that there is only one China in the world and Taiwan is an inseparable part of Chinese territory. The government of the People’s Republic of China is the sole legitimate government representing China.”

Geng added: “This is a fact that is generally recognised by the international community.”

#tRrump is a real bull in a china shop, so to speak. But what was his real goal in talking to Taiwan? Think Progress: Trump’s unusual phone call is great for his business, dangerous for America.

Trump is mixing his business with the presidency. Today was a stark illustration that the combination is extremely dangerous — to Americans and the world.

The Financial Times, citing three sources, reports that Trump called Tsai Ying-wen, the president of Taiwan, on Friday. The call is a symbolic breach of the United States’ “One China” policy, which recognizes Beijing as the only government and which has been in place since 1972.

The call will antagonize China and risks “opening up a major diplomatic dispute with China before he has even been inaugurated.”

A representative from the Trump Organization paid a visit to Taoyuan in September, expressing interest in the city’s Aerotropolis, a large-scale urban development project aimed at capitalizing on Taoyuan’s status as a transport hub for East Asia, Taiwan News reports.With the review process for the Aerotropolis still underway, Taoyuan’s mayor referred to the subject of the meeting as mere investment speculation. Other reports indicate that Eric Trump, the president-elect’s second son and executive vice president of the Trump Organization, will be coming to Taoyuan later this year to discuss the potential business opportunity.

#tRump is trying to turn our country into a wholly owned subsidiary of the #tRump organization. 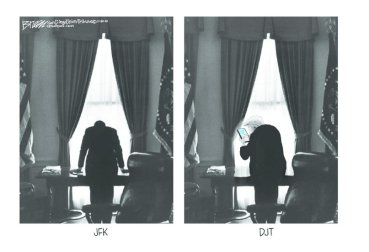 In just the past couple of days, Trump has bumbled through bizarre phone calls with Pakistan’s prime minister Nawaz Sharif and Philippine strongman Rodrigo Duterte. Do you supposed #tRump even knows that China, Pakistan and sworn enemy India have nukes?

The Atlantic: Lessons From Trump’s ‘Fantastic’ Phone Call to Pakistan.

This week, the U.S. president-elect spoke with the Pakistani prime minister and, according to the Pakistani government’s account of the conversation, delivered the following message: Everything is awesome. It was, arguably, the most surprising presidential phone call since George H.W. Bush got pranked by that pretend Iranian president.

Pakistan, Donald Trump reportedly told Nawaz Sharif, is a “fantastic” country full of “fantastic” people that he “would love” to visit as president. Sharif was described as “terrific.” Pakistanis “are one of the most intelligent people,” Trump allegedly added. “I am ready and willing to play any role that you want me to play to address and find solutions to the outstanding problems.” ….

It’s unclear how accurate the Pakistani government’s record of the discussion is, though the language does have a Trumpian ring to it (Trump’s transition team released a much more subdued summary of the call). But what’s surprising about the account is how disconnected it is from the current state of affairs. Everything is not awesome in U.S.-Pakistan relations. The two countries are the bitterest of friends. They have long clashed over the haven that terrorist groups have found in Pakistan and over U.S. efforts, including drone strikes and the raid on Osama bin Laden’s compound, to kill those terrorists. Pakistan, a nation with a growing arsenal of nuclear weapons, is the archenemy of India, another nuclear-armed state and a critical U.S. ally. U.S. officials see Pakistan—with its weak political institutions and suspected government support for militant groups in Afghanistan and the contested territory of Kashmir—as an alarming source of regional instability. The suspicion is mutual: Just a fifth of Pakistanis have a favorable view of the United States. Trump himself has argued that Pakistan “is probably the most dangerous” country in the world, and that India needs to serve as “the check” to it. 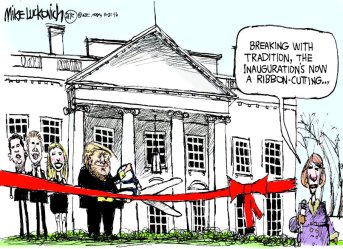 The reports also provoked a caustic response from the Indian government, which opposes U.S. mediation in its border dispute with Pakistan. “We look forward to the president-elect helping Pakistan address the most outstanding of its outstanding issues: terrorism,” a spokesman for the Ministry of External Affairs said. And, ultimately, they forced Pakistani officials to backpedal after initially publicizing the conversation. “Our relationship with the United States is not about personalities—it is about institutions,” a spokesman for the Ministry of Foreign Affairs clarified. In other words, a brief, breezy conversation had real reverberations on the subcontinent.One lesson of the phone call is that words matter, especially in international relations where information is patchy, things get lost in translation, rhetoric is often interpreted as policy, and a government’s credibility is only as good as its word. (Think of all the people in the United States puzzling over what policies Trump will pursue as president; now imagine trying to do that from Islamabad or New Delhi.)

And now Pakistan is sending an envoy to meet with the #tRump bumblers. The Indian Express reports:

Pakistan has decided to send an envoy to the US to hold meetings with Donald Trump’s transition team, two days after a “productive” telephonic conversation between Prime Minister Nawaz Sharif and the President-elect. Pakistani Prime Minister’s special assistant for foreign affairs Tariq Fatemi will visit the US this weekend to meet officials of the Trump transition team.

U.S. President-elect Donald Trump praised Philippines leader Rodrigo Duterte for his war on drugs that has left thousands dead, Duterte said on Saturday after the two held a phone conversation in which Trump also invited Duterte the White House.

“He was quite sensitive also to our worry about drugs. And he wishes me well … in my campaign and he said that … we are doing it as a sovereign nation, the right way,” Duterte said in a statement. Duterte has conducted a severe crackdown on drugs in the country, where police and vigilante groups have killed thousands.

Trump’s brief chat with the firebrand Philippine president follows a period of uncertainty about one of Washington’s most important Asian alliances, stoked by Duterte’s hostility towards President Barack Obama and repeated threats to sever decades-old defense ties.

So #tRump is on the record supporting mass murder now. Awesome.

Two more links to check out:

The New York Times: How Trump’s Calls to World Leaders Are Upsetting Decades of Diplomacy.

Isn’t there anyone who can do something about this monster before he destroys our country and/or blows up the world? We are so screwed.