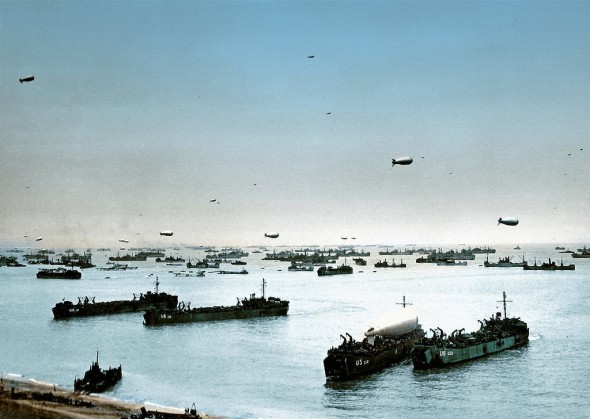 Today is the 71st anniversary of the D-Day invasion of Normandy. I found some stunning original color photos at The Denver Post, and I thought I’d share a few of them here. Go to the link to see the entire collection. I’ve also gathered some interesting articles on the “longest day” along with remembrances from survivors.

From The Charlotte Observer: D-Day: Only the beginning – with the end nowhere in sight, by David Perlmutt.

With Saturday comes another anniversary of D-Day as the light continues to dim on the generation that fought it.

Seventy-one years have passed since Carolinians such as Andy Andrews of Black Mountain and Walter Dickens of Monroe got their first taste of combat when they rushed ashore at Normandy, France, on June 6, 1944, the pivotal day historians tag as the beginning of the end for Nazi Germany.

It was more of a beginning than an end. Long after D-Day’s first anniversary, the bullets would continue to fly in the Pacific theater and other parts of the world.

A year ago, I wrote a series of stories to honor the 70th anniversary of D-Day through the eyes – and distant memories – of Andrews, Dickens and others like paratroopers Harold Eatmon of Mint Hill and E.B. Wallace of Waxhaw. The fighting took another 11 months and horrific losses during battles in countries such as France, Holland, Belgium and ultimately Germany before the Germans surrendered.

Planes from the 344th Bomb Group, which led the IX Bomber Command formations on D-Day on June 6, 2014. Operations started in March 1944 with attacks on targets in German-occupied France, Belgium, and the Netherlands. After the beginning of the Normandy invasion, the Group was active at Cotentin Peninsula, Caen, Saint-Lo and the Falaise Gap. (Photo by Galerie Bilderwelt/Getty Images)

Fighting continued in the Pacific, where my Dad was stationed, for a long time after June 6, 1944. He was on a ship traveling to Japan when the U.S. dropped the bombs on Hiroshima and Nagasaki. He said they celebrated–not knowing the horror the bombs would unleash–they were saved. My Dad might not have come home if those bombs hadn’t been dropped.

A year after D-Day, thousands of U.S. Marine and Army troops were still two weeks away from capturing Okinawa, the last in a hopscotch of islands that Allied forces needed for a plan to force Japan’s unconditional surrender. Offshore, U.S. Navy ships absorbed daily attacks by Japanese kamikaze (suicide) planes as their guns pounded hills above the landing beaches. Army Air Forces planes bombed targets inland to soften the Japanese defense.

As they fought to take control of Okinawa, hundreds of thousands of U.S. soldiers, Marines and sailors prepared to take part in what would have been history’s greatest battle – Operation Olympic, code-named Downfall, the invasion of the Japanese homeland.

They knew the fighting would be fierce.

Much more at the link. It’s a very good piece. 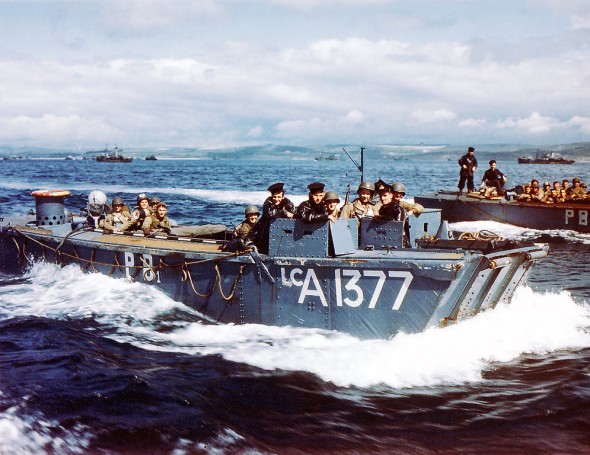 British Navy Landing Crafts (LCA-1377) carry United States Army Rangers to a ship near Weymouth in Southern England on June 1, 1944. British soldiers can be seen in the conning station. For safety measures, U.S. Rangers remained consigned on board English ships for five days prior to the invasion of Normandy, France. (Photo by Galerie Bilderwelt/Getty Images)

CNN: He got to witness ‘The Longest Day,’ by Val Lauder.

Cornelius Ryan was a 24-year-old war correspondent when he had a chance to see a defining moment in the defining event of the 20th century — the Allied landings on the coast of France to retake France and bring down Hitler.

Ryan at first witnessed the invasion from a bomber that flew over the beaches. Then, back in England, he scrambled to find the only thing he could that was going to Normandy. A torpedo boat that, he learned too late, had no radio. “And if there’s one thing that an editor is not interested in,” he said, “it’s having a reporter somewhere he can’t write a story.”

Recalling those five hours off the coast, watching the struggle on the beaches, he remembered “the magnitude of the thing, the vastness. I felt so inadequate to describe it.”

But today, as the 71st anniversary of D-Day approaches on June 6, Ryan is most likely to be remembered for being the one who did describe it, who told so many millions the real story of what happened that day, in his book which became the famous movie, “The Longest Day.”

Lauder was a young woman headed to journalism school at Northwestern when the invasion took place.

In September 1962, I interviewed Cornelius Ryan before the New York premiere of the film. Ryan had become the authority on the events of June 6, 1944, following publication of his book. And as he himself noted, in the 10 years it took him to research and write the book, he became “a veritable depository of D-Day memorabilia.”

He shared some of what he’d learned as we talked in the study of his home in Ridgefield, Connecticut, that Sunday afternoon.

Read her remembrances at the CNN link.

The 1st Infantry Division of the United States Army (The ‘Big Red One’) in Dorset, United Kingdom on June 5, 1944 before departing for Omaha Beach. (Photo by Galerie Bilderwelt/Getty Images)

The Christian Science Monitor: D-Day June 6, 1944: How did Hitler react?

Considering the pivotal nature of June 6, 1944, how did Hitler react to the attack? Did he rant, did he rail? Did he move with focused calm to try and repel the invaders? [….]

In the early days of June Germany’s Fuhrer was at The Berghof, his residence in the Bavarian Alps. Everyone there knew an invasion was likely in the near future, but the atmosphere was not nervous, according to contemporary accounts. To the contrary it was relaxed, and in the evening, almost festive. A group of guests and military aides would gather at the complex’s Tea House and Hitler would hold forth on favorite topics, such as the great men of history, or Europe’s future.

On the evening of June 5, Hitler and his entourage watched the latest newsreels, and then talked about films and theater. They stayed up until 2 a.m., trading reminiscences. It was almost like the “good old times,” remembered key Hitler associate Joseph Goebbels.

When Goebbels left for his own quarters, a thunderstorm broke, writes British historian Ian Kershaw. German military intelligence was already picking up indications of an oncoming Allied force, and perhaps landing troops, in the Normandy region. But Hitler wasn’t told. The Fuhrer retired around 3 a.m.

German headquarters confirmed that some sort of widespread attack was in progress shortly thereafter. At sunrise, around 6 a.m., the defenders knew: Allied ships and planes were massed off the French beaches in astounding strength, and men were beginning to come ashore. It was a sight many would never forget.

But the German reaction was slow and befuddled. Was this the real thing, the main invasion? Or was it a feint, with the real force to land elsewhere, probably Calais?

A U.S. Landing Craft Infantry (LCI) filled with invasion troops approaches the French coast from the sea in June of 1944. The GIs wear life vests in preparation for the landing. (Photo by Galerie Bilderwelt/Getty Images)

The Daily Beast, The Stacks: A D-Day Vet Shows Normandy to His Son.

The Nation on what was happening in Congress on D-Day–a bunch of nonsense, just like today. June 6, 1944: D-Day Invasion of France. 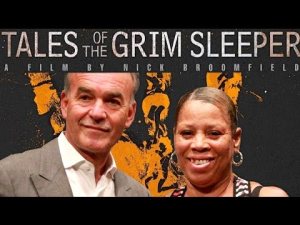 Before I get to the rest of the news, I want to highly recommend an HBO documentary I watched a few days ago called Tales of the Grim Sleeper. It’s the story of how serial killer Lonnie Franklin, Jr. murdered as many as 100 African-American women in South Central LA over more than 20 years while the LAPD ignored what was happening.

This isn’t the story of a serial killer–it’s about police attitudes toward the poor and people of color; and it fits right in with recent events in places like Ferguson, Cleveland, Staten Island, and Baltimore and with the Black Lives Matter movement.

This story could have happened in a poor neighborhood in any major American city. In fact, there was a similar case in Cleveland where Anthony Sowell murdered poor black women for years without getting caught because the crimes weren’t taken seriously.

If you have HBO or can get access to it, please watch this outstanding film.

Other News, links only

AP, via AOL, Sister: Brother had sexual relationship with Hastert.

Fox News, Jessa: Josh Duggar was ‘in puberty and a little too curious about girls.’

Is a crime still “alleged” after the perpetrator and his parents acknowledge that he did it? Just asking.

Time, Josh Duggar’s Sister on Molestation: ‘It Wasn’t Like a Horror Story.’

Yibada, Josh Duggar’s Sister Jill Dillard: My Parents Did Such An Amazing Job.

What else is happening? As always, treat this as an open thread.