It was inevitable that Trump’s dismissive attitude toward the coronavirus pandemic would lead to skyrocketing cases in Southern and Western states as cases are falling here in the Northeast. And it is happening now.

New coronavirus cases in the United States have surged to their highest level in two months and are now back to where they were at the peak of the outbreak. New cases have been surging for more than a week after trending down for more than six weeks.

On Tuesday, the U.S. reported 34,700 new COVID-19 cases, according to data compiled by Johns Hopkins University that was published on Wednesday. There have only been two previous days that the U.S. has reported more cases: April 9 and April 24, when a record 36,400 cases were logged. 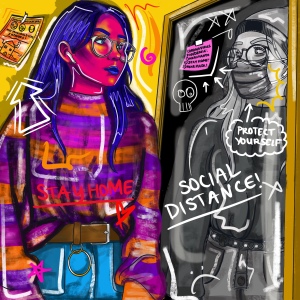 While early hot spots like New York and New Jersey have seen cases steadily decline, the virus has been hitting the south and west. Several states on Tuesday set single-day records for new cases, including Arizona, California, Mississippi, Nevada and Texas.

Over the last two weeks, coronavirus hospitalizations have trended upward in at least 14 states, including Texas, where there’s concern the spread is accelerating, CBS News’ Mireya Villarreal reported Wednesday.

Dr. Marc Boom, president and CEO of Houston Methodist hospitals, said the number of COVID-19 patients hospitalized in that city has tripled since Memorial Day.

“If we don’t all work together to bring this curve back down, yes, we’re gonna have a challenging situation,” he said.

NBC News: ‘The explosion has to slow down’: Texas hospitals on edge as coronavirus cases surge.

Anxiety is setting in for Texas hospital officials as the number of coronavirus patients has surged in the last few days.

“Currently we have room, but things have to change. This is not good,” said Dr. Faisal Masud, medical director of critical care medicine at the Houston Methodist hospital system. “The explosion of patients all across, that explosion has to slow down.”

Texas Gov. Greg Abbott said Wednesday that “there is a massive outbreak of COVID-19 across the state of Texas,” with over 5,551 coronavirus cases on Wednesday and more than 4,000 hospital patients with COVID-19. The latest numbers put the state’s new case total at more than 11,000 over two days. The state is in its second week of record-breaking coronavirus hospitalizations….

In San Antonio, Dr. Bryan Alsip, chief medical officer of University Health System, one of the larger health systems in the city, said rapid increases in the number of COVID-19 inpatients are being seen across all facilities, consistent with cases reported outside the hospital in the city.

The facilities had returned to performing non-COVID procedures over the last six weeks, Alsip said. But as COVID-19 cases have risen, it’s put more pressure on the hospitals for capacity.

This week they’re scaling back on elective surgical cases “just to make sure we have sustainable capacity going forward,” Alsip said.

CNN: The 3 most populous states are breaking coronavirus records, leading to fears of ‘apocalyptic’ surges.

The three most populous states set records for new coronavirus cases daily and there are fears of “apocalyptic” surges in major Texas cities if the trend continues….

In Texas, if the current case trajectory continues, Houston could be the hardest-hit city in the US with numbers rivaling those in Brazil. Infection numbers are also rising in Dallas, Austin and San Antonio, said Dr. Peter Hotez, dean of the National School of Tropical Medicine at the Baylor College of Medicine.

“The big metro areas seem to be rising very quickly and some of the models are on the verge of being apocalyptic,” Hotez told CNN’s Anderson Cooper.

Models show that Houston could have a four-fold increase in the number of daily cases by July 4, he said, adding that states need to act to stop community transmission….

Florida, Texas and California account for 27.4% of the 328 million people living in the US, according to the latest US Census Bureau estimates.

And while some politicians say the higher number of infections is due to increased testing, that is not the case, said Michael Osterholm, director of the Center for Infectious Disease Research & Policy at the University of Minnesota.

Trump simply doesn’t care. In fact yesterday he actually claimed that the danger from the pandemic is over.

Stephen Collinson at CNN: Trump is not just in denial but also indifferent to an unfolding American tragedy.

The US just hit its third highest ever peak of new coronavirus cases, multiple states are registering their own daily records and three are now taking the extraordinary step of imposing quarantines for citizens from pandemic hotspots. The world’s most powerful nation lacks a coherent national strategy to meet another cresting viral crisis, the capacity or even the willingness to take steps that might stop it.

It is also led by a man who is suggesting by his actions and attitudes that he doesn’t care that much about the unfolding tragedy. 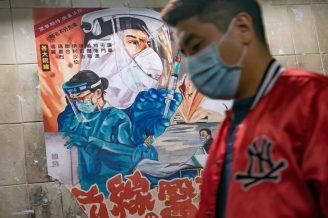 Trump, who has previously predicted a “miracle” would occur or the virus would just disappear in the warmer weather, again declared falsely Wednesday that the danger had passed — even with the nation racing towards another deadly summit of infection. In his latest misleading effort to create a picture of normality, Trump welcomed Polish President Andrzej Duda to the Oval Office.

“This is the first after Covid, after the start of the plague as I call it,” Trump told his visitor, who was happy to play along after being given a huge political gift of a visit a few days before a national election and approvingly noted “the end of the coronavirus.”

But the coronavirus pandemic in the United States is like watching a “public health train wreck in slow motion,” said Dr. David Blumenthal, president of The Commonwealth Fund, in an Alliance for Health Policy and Commonwealth Fund webinar on Wednesday.

“It can be frustrating and perplexing,” he added. “But now is the time to stop dwelling on the past and to start looking forward, and to ask ourselves how we can seize the moment, learn from experience and make things better.”

Instead, the President’s attitude appears to have crossed into callous indifference.

And now Trump is planning an insane celebration at Mount Rushmore on July 3 that could further spread the virus and trigger wildfires.

President Trump is planning a massive fireworks display at Mount Rushmore on July 3, despite a decade-long ban on pyrotechnics at the iconic spot because of concerns about public health, environmental and safety risks. 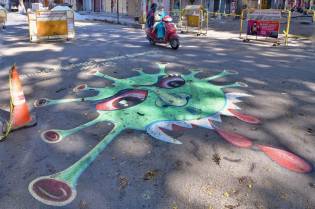 Trump has wanted to stage fireworks at the national memorial in South Dakota’s Black Hills since 2018, according to two individuals familiar with the matter who spoke on the condition of anonymity to discuss internal deliberations. But the idea was scuttled or delayed by a number of his advisers, these individuals said.

The National Park Service stopped staging pyrotechnics at Mount Rushmore in 2010 out of concern that it could ignite wildfires under drought conditions. The memorial is surrounded by 1,200 acres of forested lands, including ponderosa pines, and lies next to the Black Hills National Forest’s Black Elk Wilderness.

South Dakota officials claim there is no danger from the fireworks. Yeah, right.

Neither federal nor state officials have imposed social distancing requirements as part of the gathering. The state tourism department, which is distributing 7,500 tickets for the event, has estimated that it has had requests for at least 125,000….

South Dakota’s total number of coronavirus cases as of Wednesday, 6,419, far surpasses those of North Dakota — which had 3,362 cases — although their populations are nearly identical. South Dakota’s rate of 720 cases per 100,000 compares to a rate of 436 per 100,000 for its northern neighbor, according to the CDC.

At the New York Times, Charles Blow asks: Can We Call Trump a Killer?

The coronavirus pandemic is still raging in this country. In fact, in more than 20 states, the number of cases is rising. More than 120,000 Americans have died from the virus. This country has a quarter of all the cases in the world even though it makes up only 4 percent of the world population.

Things are so bad here that the European Union, which has lowered its rates, is considering banning U.S. citizens when it reopens its borders.

This situation is abysmal, and it would not have been so bad if President Trump had not intentionally neglected his duty to protect American citizens.

From the beginning, Trump has used every opportunity to downplay the virus, claiming in February, “Looks like by April, you know, in theory, when it gets a little warmer, it miraculously goes away.” Well, we’re now in June, summer. It’s not just warm, it’s hot. And the cases in the hottest states — those in the South and Southwest — are surging.

Trump has consistently been resistant to testing, falsely claiming that an increase in testing is somehow linked to an increase in cases. But in fact, the more you test, the more you are able to control the virus by identifying, isolating and treating the infected, thereby reducing the spread of the virus. Testing is how you reduce your cases. It is also how you save lives.

But Trump believes that to reveal the true extent of the virus’s presence in this country would make him look bad. So more people get sick and more people die….

What Trump is truly saying here is, let people get sick without proper surveillance. He is saying, let them suffer out of sight. He is saying, some will die, but so what. He is saying vulnerable Americans are collateral damage in his image-making and re-election bid.

Read the whole thing at the link.

Finally, please check out this fascinating explanatory piece at The New York Times: How The Virus Won.

I’ll add more news links in the comment thread. Please take care if you’re in one of the new hot spots.