Friday Reads: I never had Saharan Dust on my Wicked Weather Bingo Card 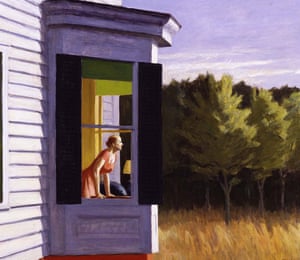 So, this is the sky down here today!  Saharan dust hits Louisiana and I’m sitting here waiting for my AC guy to check the refrigerant because the AC is not cooling. He just called and he’s running late. It was not a fun night.  Hopefully, he gets here as quickly as possible.

Today’s paintings are by Edward Hopper. They’re a gallery of social distancing and isolation.  You can follow this link to the UK Guardian.

Some people are saying we now all exist inside an Edward Hopper painting. It doesn’t seem to matter which one.

We all hope to defy Hopper’s terrifying vision of alienated, atomised individuals and instead survive as a community. But, ironically, we have to do that by staying apart and it may be cruelly dishonest – the empty propaganda of the virus war – to pretend everyone is perfectly OK at home.

For the message of Hopper is that modern life can be very lonely. His people are as isolated among others in a diner or restaurant as they are at their apartment windows. In this he is typical of modernist art. Edvard Munch had already shown in his nightmarish Evening on Karl Johan Street that a crowd can be a very isolating place to be.

Today, we’re simply better at hiding the isolation that these artists thought defined the modern condition. In normal times, we sit alone in cafes, too, except we’ve now got mobile phones to make us feel social. The fact is that modernity throws masses of people into urban lifestyles that are totally cut off from the gregariousness that was once the norm.

Now, about that dust cloud … 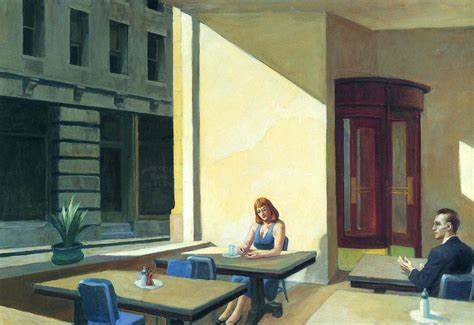 It’s pretty much the same three headlines BB gave you yesterday.  A good number of the states in the South that were overly eager to open are inundated with Covid-19 cases.  The number of cases of young people testing positive is going up.  I am really glad I’m not going to be on a campus any time soon.  This is from NBC: “The future of the coronavirus recovery runs through the classroom.  Analysis: Nobody knows what school will look like in the fall, and that’s a huge problem for everything from the economy to November’s elections.”

With just weeks to go before classes typically begin, education advocates complain that the federal government’s response has been lethargic — the House and the Senate have held hearings on opening schools and child care facilities, but President Donald Trump and Republican leaders have been slow to craft a relief bill that might back up school budgets and fund new pandemic safety measures.

“It’s really shocking to me how little appreciation there is for the situation in Washington,” said Linda Darling-Hammond, president of the Learning Policy Institute and head of the California State Board of Education. “It’s not a problem that can be solved at the state level.”

Plans are still in flux for state and local governments, but parents hoping for a swift return to normal are likely to be disappointed. Many districts are weighing proposals in which students would split time between virtual and in-person classes to maintainstrict social distancing inside buildings.

And as businesses and investors try to map the arc of the recovery, they should probably start with those classrooms.

“There are 78 million parents with at least one child in their household under 18. That’s almost a third of the adult population,” said labor economist Ernie Tedeschi, a former Treasury Department official. “A parent’s ability to find and keep a job is inseparable from child care and schooling.”

Our Covid-19 numbers are going up again here in Louisiana. We worked hard at a shut down and we also openeved very slowly. A lot of the outbreaks are due to an LSU hangout called Tigerland.  Even the football team has tested positive.  This may be a problem in college campuses everywhere: “Why coronavirus spike in Baton Rouge among young adults is causing a big problem for testing” via The Advocate.

Cars backed up Thursday near Baton Rouge’s Tigerland bars, with college students flocking there not for “thirsty Thursdays” but for coronavirus tests amid a worrisome spike in infections among young adults in Louisiana that is reigniting concerns about the availability of tests.

Cases of the virus are growing so quickly among young adults that some providers say they’re struggling to provide enough tests, while some people who suspect they have been infected say it’s been a challenge to find a test.

“We were doing pretty well for a while there in keeping up with the demand,” said Dr. Kevin DiBenedetto, the medical director for Premier Health, which runs dozens of urgent care clinics across the state, including Lake After Hours in Baton Rouge, LCMC Health Urgent Care in New Orleans and Lourdes Urgent Care in the Lafayette area.

“With this spike, it totally crushed our supply of tests,” DiBenedetto said.

Testing availability was an early concern when the coronavirus pandemic flared locally in March. For the first several weeks of the outbreak, potential coronavirus patients had to meet rigid standards to get tested because hospitals and clinics were so short on supplies. And once they did get tested, many reported long lags between the time they got tested and the time they received results.

I cannot understand why we opened bars in the state.

Paul Krugman sums it up for me: “America Didn’t Give Up on Covid-19. Republicans Did. Partisanship has crippled our response.”  He asks “what went wrong?”

The immediate answer is that many U.S. states ignored warnings from health experts and rushed to reopen their economies, and far too many people failed to follow basic precautions like wearing face masks and avoiding large groups. But why was there so much foolishness?

Well, I keep seeing statements to the effect that Americans were too impatient to stay the course, too unwilling to act responsibly. But this is deeply misleading, because it avoids confronting the essence of the problem. Americans didn’t fail the Covid-19 test; Republicans did.

After all, the Northeast, with its largely Democratic governors, has been appropriately cautious about reopening, and its numbers look like Europe’s. California and Washington are blue states that are seeing a rise in cases, but it’s from a relatively low base, and their Democratic governors are taking actions like requiring the use of face masks and seem ready to reverse their reopening.

So the really bad news is coming from Republican-controlled states, especially Arizona, Florida and Texas, which rushed to reopen and, while some are now pausing, haven’t reversed course. If the Northeast looks like Europe, the South is starting to look like Brazil.

Nor is it just Republican governors and state legislatures. According to the new New York Times/Siena poll, voters over all strongly favor giving control of the pandemic priority over reopening the economy — but Republican voters, presumably taking their cue from the White House and Fox News, take the opposite position.

And it’s not just about policy decisions. Partisanship seems to be driving individual behavior, too, with self-identified Democrats significantly more likely to wear face masks and engage in social distancing than self-identified Republicans.

The question, then, isn’t why “America” has failed to deal effectively with the pandemic. It’s why the G.O.P. has in effect allied itself with the coronavirus.

Well, my response to that is greed and they only care about rich white people.

The announcement comes as at least 30 states are seeing a resurgence in cases of Covid-19, and California, Oklahoma and Texas are seeing fresh high peaks.

The briefing will not take place at the White House, but at the Department of Health and Human Services, according to a schedule released by the White House.

The public meeting comes as President Donald Trump has tried to declare the pandemic “over” despite the rising numbers, and has instead focused his administration’s energy on reopening the economy.

There is a lot of Trump News and I’ll just list it here. I can’t take even thinking about him atm.

Trump Is in a Deep Hole.  Can He Dig Himself Out Before November?

Every single poll that has come out in these last two weeks has painted a dire picture for President Donald Trump’s chances at re-election.  His overall job approval rating sits somewhere around 41 percent.

If successful, the move would permanently end the health insurance program popularly known as Obamacare and wipe out coverage for as many as 23 million Americans.

Mary Trump once stood up to her uncle Donald.  Now her book describes a ‘nightmare’ of family dysfunction.

Mary L. Trump was embroiled in a feud over her inheritance two decades ago when her uncle Donald Trump and his siblings punched back in classic style.

Trump Retreats to His Hannity Bunker

Beaten by the pandemic and down in the polls, a President and his propagandist create an alternate reality.  —  June began poorly for President Trump, and it’s ending worse.

I’m going retreat to my bed to lie under the ceiling fan a while.

21 Comments on “Friday Reads: I never had Saharan Dust on my Wicked Weather Bingo Card”