I’m not sure how much sense this post is going to make. I’ve been nauseated for days from an antibiotic called Clindamycin that I was prescribed after some dental work. I have one more dose to take this afternoon, and then I can begin trying to soothe my poor shredded stomach lining and esophagus.

It’s a somewhat slow news day following the Memorial Day weekend. Trump just returned to the U.S. from Japan. I just wish he had stayed there, but I imagine the Japanese were glad to be rid of him. As usual, Trump made a complete and utter fool of himself during his trip, praising brutal dictator Kim Jong Un and attacking Joe Biden.

Backing ruthless dictators over our allies in the region? This does not show American strength: Still angling for a deal, Trump backs Kim Jong Un over Biden, Bolton and Japan https://t.co/CSHd6YqERP

CNN: Trump undercuts his own pomp and circumstance.

Trump ought to be in the middle of an easy two-week cruise of flattering coverage and statesman-like imagery, with British royals set to follow Japan’s imperial court and roll out the red carpet pageantry that he loves next week.

He could have stepped away from the perpetually raging Washington storm, especially since Congress is on a recess that could offer a timeout from his separation-of-powers showdown with Democrats.

But asking Trump to avoid controversy is like expecting a moth to avoid a light bulb. So the President made a conscious choice to use his brief trip to Asia to whip up new outrage back home over the 2020 election and his handling of North Korea.

President Donald Trump often gripes about his bad press — but as his state visit to Japan shows, sometimes he’s his own worst enemy.

Trump and Abe news conference at Akaska Palace on Monday

“Kim Jong Un made a statement that Joe Biden is a low-IQ individual. He probably is, based on his record,” Trump said alongside Japanese Prime Minister Shinzo Abe….

…by aligning himself with a murderous tyrant who leads a hostile power against a political rival, the President also seemed to be inviting other foreign leaders to do what they can to help his re-election, whatever the consequences for American democracy….

It was an odd way to pay back Japan for its lavish hospitality, which saw Trump become the first foreign leader to meet the new Emperor, Naruhito, and attend a sumo wrestling tournament with Abe.

The President’s comments also opened new divisions between Bolton and him, which raised fresh questions about the national security adviser’s position and the true nature of US foreign policy with several crises, including with Iran, escalating.
North Korea was quick to try to widen the rift with a vitriolic dispatch from its official news agency, KCNA, branding Bolton a “war maniac” with a “different mental structure from ordinary people.”

President Donald Trump is isolating himself from allies and even his own advisers on North Korea, eager to insist that his denuclearization efforts will be successful going into a 2020 re-election bid.

But the president on Monday, at the end of his short trip to Japan to meet the new emperor, insisted that he was not “personally” bothered by the tests and was “very happy with the way it’s going” in his efforts to engage North Korean leader Kim Jong Un. Notably, Trump said he did not think the tests violated the U.N. resolution.

Dayton, Ohio, and surrounding communities were under a tornado emergency as a dangerous tornado was reported on Monday night. At least one fatality has been reported in Celina as of Tuesday morning.

The National Weather Service (NWS) called it a life-threatening situation as the tornado swept through the heavily populated area.

“A large, dangerous tornado touched down last night in northwest Montgomery County. We are focused on supporting life-saving measures, such as shutting down gas lines or locating people who are trapped by debris,” a post on the county’s Twitter page said. “Call 911 or contact your local fire station for emergency assistance.”

The City of Dayton is asking residents to conserve water as power has been lost at both water plants and pump stations. The City of Dayton has also issued a boil water advisory for water customers in all of Dayton and Montgomery Counties, officials tweeted on Tuesday morning. The city is setting up water distribution centers at some Red Cross shelters and other locations.

Dayton was hit hard last night. Praying for everyone affected.

I have put together all of the pictures I could find, showing the true horror of the tornados last night… pic.twitter.com/x0DsaocVqc

The New York Times: Tornadoes Rip Through Ohio and Indiana.

Multiple tornadoes touched down in Ohio and Indiana on Monday night into Tuesday morning, bringing widespread reports of devastating damage along with scattered reports of injuries.

Footage on social media and from local news outlets showed roofs blown off homes, downed trees and power lines, and roads littered with debris. No deaths were reported as of Tuesday morning, and the extent of injuries was not immediately known. 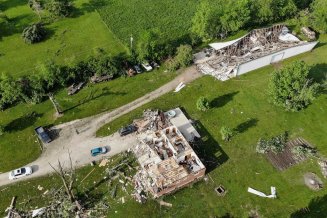 As daylight broke on Tuesday, emergency responders and homeowners were still surveying the damage, which was spread across much of Ohio….

The damage also extended to Indiana. The National Weather Service in Indianapolis said early Tuesday that it would send a team to survey tornado damage in Pendleton, about 100 miles west of Dayton and 35 miles northeast of Indianapolis.

More details at the NYT.

Maybe this is why Nancy Pelosi is hesitant to begin impeachment hearings.

GOP senators say that if the House passes articles of impeachment against President Trump they will quickly quash them in the Senate, where Majority Leader Mitch McConnell (R-Ky.) has broad authority to set the parameters of a trial.

While McConnell is required to act on articles of impeachment, which require 67 votes — or a two-thirds majority — to convict the president, he and his Republican colleagues have the power to set the rules and ensure the briefest of trials.

“If it’s based on the Mueller report, or anything like that, it would be quickly disposed of,” he added.

Sen. John Cornyn (R-Texas), an adviser to McConnell’s leadership team, said “nothing” would come of impeachment articles passed by the House….

Senate Republicans say that an impeachment trial would be given the bare minimum amount of floor time.

This is why House Democrats should simply open an impeachment inquiry and hold open hearings right through the 2020 election if necessary. 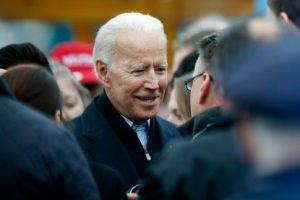 According to Politico, Joe Biden isn’t attracting much enthusiasm from voters even though he leads in the Democratic primary polls: Joe Biden is the front-runner by every measure — except enthusiasm.

Attendance at the former vice president’s launch rally paled next to some of his rivals. In his first Iowa visit, he didn’t match the crowds that greeted Elizabeth Warren or even the less well-known Pete Buttigieg in their initial visits. So far, he’s kept his events to smaller venues where there’s little danger of empty seats.

In the eyes of Biden’s progressive critics — as well as President Donald Trump, who has publicly mocked him for it — the seeming lack of excitement or teeming masses at his events is a leading indicator of a lack of passion for his candidacy.

“I started to think the polls were wrong about Biden because it’s not what we’re seeing on the ground,” said Aimee Allison, founder and president of She the People, a national network devoted to promoting women of color….

I hope that means that Biden will lose ground once he has to face charismatic candidates like Kamala Harris and Elizabeth Warren in the debates.

Speaking before an audience of roughly 200 people during a Saturday campaign stop in Des Moines, Klobuchar described Trump’s inauguration as “dark” and recalled how she sat on the stage between John McCain and Sen. Bernie Sanders (I-Vt.) that day while Trump delivered a speech about rampant crime, rusted-out factories and “American carnage.” The fiery populist rhetoric apparently reminded McCain of various authoritarian figures from throughout history.

Megan McCain wasn’t happy; she apparently thinks no one is allowed to talk about her late father (a public figure) except for family members. She tweeted:

“On behalf of the entire McCain family — @amyklobuchar please be respectful to all of us and leave my father’s legacy and memory out of presidential politics,”

Good luck with that, Meghan.

Well, this isn’t much of a post–as I said, it’s a slow news day. What stories have you been following?