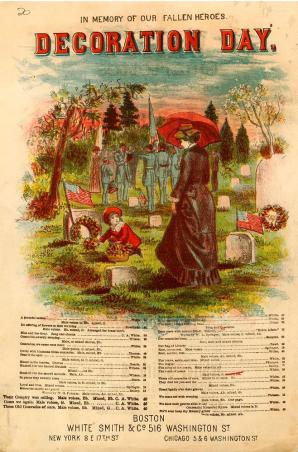 Today is Memorial Day Holiday where we remember those who died in service to our country during a time of War. Memorial Day began as Decoration Day when families and survivors of Civil War Dead took time to picnic and decorate their family cemeteries with special attention to those who fell in battle. It is thought to have been originated by slaves directly after the Civil War to celebrate emancipation and to remember those who had died fighting for it.

It’s the day when I remember learning that states like Mississippi still refuse to fully honor its intent. That is one of the reasons why I’ve been paying close attention to the goings on today and wondering why it is that the current Potted Plant in the White House is always out of the country instead of laying wreaths at the Tomb of the Unknown solider which tends to be what actual Presidents do instead of searching for reasons for more ways to get the members of our Armed Forces killed in action.

The veterans’ group known as the Grand Army of the Republic issued the call to honor those who had made the ultimate sacrifice in the recently concluded Civil War, “Let us at the time appointed, gather around their sacred remains and garland the passionless mounds above them with the choicest flower of Spring time; let us raise above them the dear old flag they saved from dishonor” and pledge to assist their widows and orphans. Since it came from the GAR, a disciplined organization of Union veterans with many local posts, the suggestion for May 30, 1868 was widely observed.

This ancient practice of floral decoration of burial places seemed to take hold spontaneously as the Civil War battlefields and prison camps yielded their massive casualties in many areas of the United States. Communities in Carbondale, Illinois, Boalsburg, Pennsylvania, Columbus, Mississippi, Columbus, Georgia, Belle Isle in Richmond, Virginia, and Waterloo, New York all make legitimate claims to have begun the tradition a few years before 1868. We don’t attempt to weigh the various claims of origin here, but common in many of the early observances was the role of women in taking the initiative, gathering the flowers, and honoring both the Confederate and Federal war dead in their graveside tributes. Most recent research by Richard Gardiner and Daniel Bellware credibly trace the holiday’s origins to the “Confederate Memorial Day” observed in Columbus, Georgia beginning in April 1866. It is a suitable practice, the New York Telegram remarked in April 1869, “though it did originate in the South during the late war, and is one of the few of the rebel ideas that engrafted itself upon our blunted affections.”

The reporters present at Arlington National Cemetery in Virginia that day in May 1868 reminded us that the graves occupied the grounds of Confederate general Robert E. Lee’s manor. Several Union generals attended to hear one of their own, future President James A. Garfield, give the featured address. Ulysses Grant was there with his daughter, the newspapers noted, but, in keeping with the avoidance of partisanship, no mention was made that he had been nominated for president some ten days earlier. Unity was stressed, as the New York Tribune stated, “so Protestant and Catholic, Jew and Gentile, joined hand and hand [sic] above the mounds, and laid sweet offerings upon a common altar. All over the land from Maine to Florida, tears and flowers fell on the graves of heroes and martyrs.”

Meanwhile, we get this kind of leadership on Memorial Day Weekend. I’m old enough to remember over 54,000 Americans died during something called the Korean War and that North Korea is still a rogue state under murderous and cruel Dictatorship.

How many Americans died in the Korean War?
This is disgusting.
On Memorial Day.
Impeach the traitor NOW!

Only KKKremlin Caligula good make me feel some sympathy for Joe Biden. I’m sure it will pass quickly. I also remember a time when we all agreed that Fascists were bad.

But, now we see they walk among us …

Nolan Brewer, 21, said he and his wife were in contact with a white nationalist over Discord, read Breitbart and Nazi propaganda site Stormfront, and became members of Identity Evropa.’

In July 2018, Brewer and his then-17-year-old wife, Kiyomi Brewer, drove 50 miles from their home to the synagogue, spray painted a Nazi flag and iron crosses on a Dumpster enclosure, and lit a fire on the ground. Prosecutors said they originally planned to break into the synagogue and destroy it with homemade bombs and napalm they brought along, but they got scared.

In an interview with FBI agents, Brewer said they wanted to send a message to Jews as a race. He cited bogus statistics, aiming to back up the racist conspiracy theory that Jews have undue political influence.

“I guess it’s just …. back down or something like that,” Brewer told the FBI, describing the message of the vandalism. He also said he wanted to make news headlines, and was proud word of the attack reached Vice President Mike Pence, who condemned it.

Brewer told FBI agents he wanted to “scare the hell out of them,” prosecutors said, and send “a message of like, get out I guess.”

His defense attorneys acknowledged that Brewer had latched onto pseudointellectual arguments for white supremacy. Evidence submitted to the court included racist memes he had shared and selfies in which he wore the iron cross associated with Nazi Germany. His phone wallpaper was an image of a swastika.

“It is clear that he has adopted beliefs based on ‘alt-right’ or white nationalist propaganda,” the defense attorneys said.

The details were first reported by data scientist Emily Gorcenski, who does extensive research on the far-right.

As his attorneys sought a lighter sentence, they outlined how a young man from a small town, who’d recently graduated from community college, and had no history of criminal or behavioral issues became radicalized.

They blamed his teenage wife, who they said had a troubled upbringing and would spend hours chatting on Discord, an app that had become popular among white supremacists. She then shared articles with her husband.

“According to Nolan, she began with rightwing yet mainstream views such as those presented on Fox News. She then moved on to writing by Ben Shapiro and articles on Breitbart News which bridged the gap to the notorious white supremacist and anti-Semititc propaganda site Stormfront.” 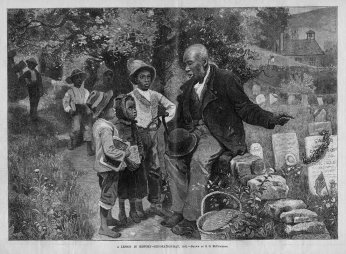 It sounds like they should be blaming Fox News and not a gullible young woman. And, btw, where is Steve Bannon today?

I’d like to share this article from The Atlantic about the Memorial Day Speech of 2017 given by then Mayor Mitch Landrieu down here in New Orleans during the year we dismantled Lee Circle and our Lost Cause Confederate statues. It’s called “The Battle for Memorial Day in New Orleans. A century and a half after the Civil War, Mayor Mitch Landrieu asked his city to reexamine its past—and to wrestle with hard truths.”

Today, our city has a woman of color–LaToya Cantrell–as its mayor.

I turn to the words of Frederick Douglass who reminded folks then of what is actually being remembered on Memorial Day. He spoke as the roots of that Lost Cause were being firmly planted. These roots are the ones that we try to dig up today and the ones that should remind us today of what our values should represent in the Age of Trumpism.

But in 1894, when Douglass spoke at Rochester, New York’s Decoration Day ceremonies, the Jim Crow era had taken root. 1 It had been over twenty years since racist conservative legislatures had been re-established all across the South – complete with former Confederates taking back their former seats of power. It had been over a decade since the Supreme Court had overturned the Civil Rights Act of 1875, deeming it unconstitutional.
Mississippi, in 1890, had rewritten its own constitution, legally disfranchising black voters, and many other states were about to follow suit. By 1894, lynchings of black Americans were skyrocketing – there would be 134 the year Douglass spoke in Rochester. 2
The Lost Cause had been firmly implanted in the South for a full generation. Its mythos was now seeping northward, infecting and changing the memory of the war and its causes. This naturally led to a false reconciliation, with Blue & Gray gatherings happening more frequently. The focus shifted from the reasons the Civil War was fought to simply leaving the past in the past. The shared experience between soldiers of both sides was the bonding agent, and while this is understandable, the black soldiers were largely left out. 3
He saw, of course, the importance of holidays such as Decoration Days, and wished for it to not become a “heartless unthinking custom.” This was why he thought it of utmost importance to remember not only the soldiers who fought in the Civil War, but also the causes for which they fought. After all, he warned, “What has happened once may happen again.”
Douglass allowed that this Decoration Day “shall share the fate of other great days,” and be slowly forgotten, replaced by “some other day more nearly allied with the wants and events” of some uncertain future. However, he was certain that the sentiments that brought them together annually “will live, flourish and bear similar fruit, forever.”
He noted the two opposing views on how the war should be remembered. The first, he said, was to treat the Southern people as if they were “always loyal and true to the government.” They had, in the estimation of many honorable men, “repented their folly, and have accepted in good faith the results of the war, and that now we should forget and forgive the past, and turn our attention entirely to the future.” 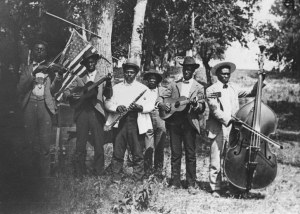 I think today it’s important we that we look at the states that are blocking the votes of People of Color and limiting the rights of women as well as finding obscene ways to cage the children of asylum seekers and deport people whose only crime is to come to a country with extremely broken immigration laws to become part of its economy and future.

Did we fight these wars against slavery and fascism sacrificing the lives of so many to go turn the clock back to oppression?

Today is the day we honor the people that fought to make us a more perfect union. Our fallen include folks of all faiths, colors, birthplaces, and gender identifications. I want a country that truly honors their supreme sacrifice by recognizing that civil and constitutional rights are everyone’s heritage. I want us to stay on the path to the more Perfect Union by respecting our rule of law and its inclusiveness.

Let us truly remember the reason for this day. 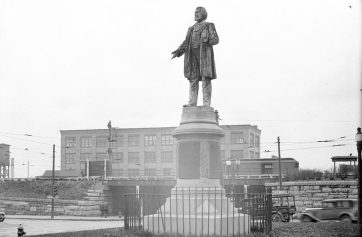