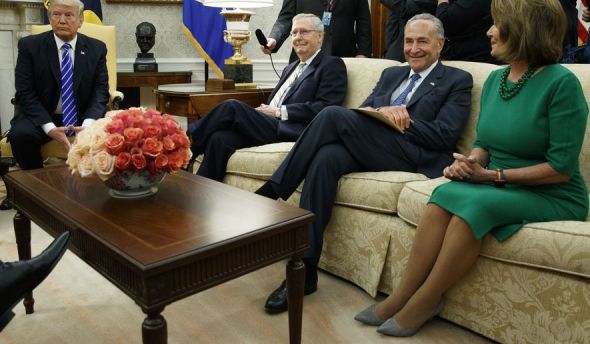 Nancy Pelosi and Chuck Shumer had dinner with Trump last night and some kind of “deal” was worked out, but no one can figure out what it was. Trump has been sending conflicting tweets about it and saying confusing things about it in Florida this morning.

The Washington Post: Trump, top A Democrats agree to work on deal to save ‘dreamers’ from deportation.

Democratic leaders announced late Wednesday that they agreed with President Trump to pursue a legislative deal that would protect hundreds of thousands of young undocumented immigrants from deportation and enact border security measures that don’t include building a physical wall.

The president discussed options during a dinner at the White House with Senate Minority Leader Charles E. Schumer (D-N.Y.) and House Minority Leader Nancy Pelosi (D-Calif.) that also included talks on tax reform, infrastructure and trade. Trump has showed signs of shifting strategy to cross the aisle and work with Democrats in the wake of the high-profile failures by Republicans to repeal the Affordable Care Act.

We’re working on a plan for DACA,” Trump said as he left the White House on Thursday for a trip to survey hurricane damage in Florida.

Trump said that he and Congress are “fairly close” to a deal and that Republican leaders Rep. Paul Ryan (Wis.) and Sen. Mitch McConnell (Ky.) are “very much on board” with a deal that would address DACA. The agreement must include “massive border security,” Trump said in response to shouted questions about whether he had reached a deal on the terms Schumer and Pelosi had described.

“The wall will come later” [link to Axios added]  he said, apparently confirming a central element of the Democrats’ account. 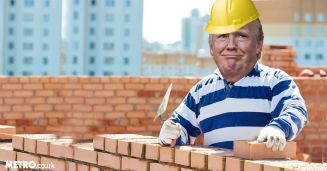 There was instant backlash from Trump’s Cro-Magnon supporters, and the White House quickly tried to walk back whatever Trump agreed to when his handlers weren’t around.

Earlier Thursday, amid backlash from conservative supporters, Trump had sought Thursday to reach out to his GOP base with messages claiming his agenda would remain intact on signature issues such as the border wall.

In a series of tweets, Trump wrote that “no deal” was made on the Deferred Action for Childhood Arrivals, or DACA, an Obama-era program that has allowed 690,000 dreamers to work and go to school without fear of deportation. He further wrote that agreements on “massive border security” would have to accompany any new DACA provisions, and insisted that “the WALL will continue to be built.”

I guess we’ll find out what’s going on eventually. It would certainly be a good thing if Congress can get its act together and do something to keep the Dreamers in the U.S.

Manu Raju of CNN had a great scoop last night that makes Devin Nunes look like even more of an idiot than ever before: Exclusive: Rice told House investigators why she unmasked senior Trump officials.

The New York meeting preceded a separate effort by the UAE to facilitate a back-channel communication between Russia and the incoming Trump White House.

The Obama administration felt misled by the United Arab Emirates, which had failed to mention that Zayed was coming to the United States even though it’s customary for foreign dignitaries to notify the US government about their travels, according to several sources familiar with the matter. Rice, who served as then-President Obama’s national security adviser in his second term, told the House Intelligence Committee last week that she requested the names of the Americans mentioned in the classified report be revealed internally, a practice officials in both parties say is common.

Rice’s previously undisclosed revelation in a classified setting shines new light on a practice that had come under sharp criticism from the committee chairman, California Rep. Devin Nunes, and President Donald Trump, who previously accused Rice of committing a crime.Ja

Once again, Trump people were caught trying to communicate secretly with Putin, because of course foreign visitors are routinely monitored by the intelligence community.

In other Russia news, Michael Flynn’s son is now a subject in the investigation. NBC News reports:

Michael G. Flynn, the son of President Donald Trump’s former national security adviser, is a subject of the federal investigation into Russian meddling in the presidential election and possible collusion between Moscow and the Trump campaign, according to four current and former government officials.

The inquiry into Flynn is focused at least in part on his work with his father’s lobbying firm, Flynn Intel Group, three of the officials said. It’s unclear when the focus on Flynn began.

Barry Coburn, who said he is serving as the younger Flynn’s legal counsel, said he couldn’t comment on the matter.

Flynn’s status as a subject of the Russia investigation widens the publicly known scope of the probe. NBC News has reported that those under investigation have included the elder Flynn and former Trump campaign manager Paul Manafort. Others under scrutiny by special counsel Robert Mueller include Carter Page, a Trump campaign ally; Jared Kushner, the president’s son-in-law and senior White House adviser; and the president’s son, Donald Trump Jr.

Yesterday White House spokesman Sarah Huckabee Sanders said that James Comey committed a crime when he leaked his personal memos about interactions with Trump to The New York Times, and called on the Justice Department to investigate him. She also called on ESPN to fire a reporter who tweeted that Trump is a white supremacist. In any other White House, Sanders herself would be fired by now. The White House is not supposed to get involved in decisions by the DOJ and the White House calling for the firing of a journalist for dissing POTUS is wildly inappropriate.

🚨The White House press secretary, from the podium, calls for a media company to fire a commentator over her criticism of the president. 🚨 pic.twitter.com/CEJggX8WNn

From Politico, a response to the recent attacks on Comey by the Trump crowd: The Hapless Smear Campaign Against Jim Comey.

From the moment Steve Bannon stated in his 60 Minutes interview that President Donald Trump’s decision to fire former FBI Director James Comey was the biggest political mistake in modern presidential history, there simply was no chance that this week would proceed without a fair amount of political insanity. The fact that the president’s former chief strategist would publicly and brazenly disparage that decision was bound to result in a fierce White House pushback. And so it has. But over the past three days, the White House has repeatedly advanced flawed and in some instances preposterous legal arguments that don’t stand up to informed scrutiny.

The hijinks began on Monday, when White House press secretary Sarah Huckabee Sanders claimed that information divulged after Comey was fired served as retroactive justification for the president’s decision. She alleged, among other things, that Comey had given “false testimony” and leaked “privileged information to journalists.” On Tuesday, Sanders did not repeat the “false testimony” claim, but she did reiterate the assertion that Comey had “leaked privileged government information” and speculated that his actions “could have been illegal.”

In Wednesday’s news briefing, reading from what appeared to be prepared notes, Sanders explained what she meant by “illegal”:

“The memos that Comey leaked were created on an FBI computer while he was the director,” she said. “He claims they were private property, but they clearly followed the protocol of an official FBI document, leaking FBI memos on a sensitive case regardless of classification violates federal laws including the Privacy Act, standard FBI employment agreement and nondisclosure agreement all personnel must sign.”

These talking points were presumably provided to Sanders by the White House Counsel’s Office, but as a litigator with considerable experience representing government officials and contractors (including whistleblowers) of all ideological persuasions, trust me: They are nonsense.

Where is the AG? @EricHolder would've been on phone immediately telling the WH to cut this crap out. I bet Mukasey/Ashcroft would've as well https://t.co/N1wM2khnlL

Have you heard the latest outrage from Treasury Secretary Steven Mnuchin and his trophy wife Louise Linton? The Washington Post reports: ‘The moochin’ Mnuchins’: Treasury secretary again is fodder for rich humor.

Just based on a quick Google search, the August exchange between Louise Linton, the wife of Treasury Secretary Steven Mnuchin, and a critic of Linton’s fashion-bragging, mean-girl Instagram post seemed to be fading, along with memories of the eclipse, which the couple was lucky enough to have observed at Fort Knox.

But it all came rushing back when ABC News reported Wednesday evening that the Treasury Department had in fact requested a government jet for Mnuchin’s European honeymoon in Scotland, France and Italy. If the request had been granted, the plane would have cost the taxpayers roughly $25,000 per hour to operate.

A Treasury Department spokesman said in a statement that the request was made so that Mnuchin, who is a member of the National Security Council, would have access to secure communications as he traveled abroad.

Remember Linton’s attack on the woman who criticized her Instagram post after the Mnuchins used a government plane to fly to Fort Knox so they could watch the solar eclipse from the rooftop?

As the news rushed across social media, so did the memory of the Instagram episode, with one line in particular standing out among the now-regretted post by Linton:

“Adorable! Do you think the U.S. govt paid for our honeymoon or personal travel?! Lololol.”

Note this lie/cover up is as bad as Mnuchin's ask. There is a list of officials required to travel on govt planes – Treas Sec is not on it. https://t.co/aihe4XGX25

Now for a change of pace, I thought you might like this archaeology story. The AP via The Toronto Sun: Well-preserved Viking sword found in Norwegian mountains.

COPENHAGEN — A Norwegian archaeologist says a well-preserved, if rusty, iron sword dating to the Viking erahas been found in southern Norway.

Lars Holger Piloe says the nearly one-metre-long sword was found slid down between rocks with the blade sticking out, and may have been left by a person who got lost in a blizzard and died on the mountain from exposure.

Piloe said Thursday the sword, dating from about 850-950 A.D., was found in Lesja, some 275 kilometres north of Oslo.

Piloe said the sword’s preservation was likely due to the quality of the iron, as well as the cold, dry conditions. It was found in late August by two men who were on a reindeer hunt some 1,640 metres above sea level.

What else is happening? What stories are you following today?