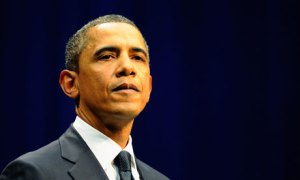 It sounds like there won’t be any surprises in the latest “inspirational” speech by the President. All the newspapers already know what he’s going to say. The New York Times says Obama is “opting for a faster pullout,” but they say he’ll only withdraw 10,000 troops this year.

President Obama plans to announce Wednesday evening that he will order the withdrawal of 10,000 American troops from Afghanistan this year, and another 20,000 troops, the remainder of the 2009 “surge,” by the end of next summer, according to administration officials and diplomats briefed on the decision. These troop reductions are both deeper and faster than the recommendations made by Mr. Obama’s military commanders, and they reflect mounting political and economic pressures at home, as the president faces relentless budget pressures and an increasingly restive Congress and American public.

The president is scheduled to speak about the Afghanistan war from the White House at 8 p.m. Eastern time.

Mr. Obama’s decision is a victory for Vice President Joseph R. Biden Jr., who has long argued for curtailing the American military engagement in Afghanistan. But it is a setback for his top commander in Afghanistan, Gen. David H. Petraeus, who helped write the Army’s field book on counterinsurgency policy, and who is returning to Washington to head the Central Intelligence Agency.

According to Josh Gerstein at Politico, Obama’s speech will address multiple audiences who are in disagreement about what to do about the war in Afghanistan.

His address comes at a time when public skepticism about the war is building. A Pew Research Center poll out Tuesday showed a record high 56 percent of Americans want the troops out as soon as possible, up from 40 percent a year ago.

Keeping the American people on board is a major challenge for Obama. But he’ll also be speaking to a number of smaller audiences in the U.S. who have a stake in the outcome of the mission — and some of them are starkly at odds about the best path forward.

The Republican Party is growing more restive about the war, liberals are hoping for a more rapid pull-out, and the military brass worries that politics might mess up a fight they think they’re winning.

Gerstein says that many military officers think they are winning and that this pullout may snatch defeat from the jaws of victory, so to speak. On the other hand, higher ups in the Pentagon are relieved that he isn’t pulling out even faster.

Some Republicans are beginning to turn against the war, but others like John McCain and Lindsey Graham are still gung ho. He also has to consider Republican presidential candidates, some of whom–Romney, Huntsman, Paul–are critical of the continuing involvement in the Middle East.

Gerstein claims that Obama is also considering the views of Democrats, which I strongly doubt. Gerstein mentions Carl Levin:

Among Democratic supporters of Obama’s overall policy in Afghanistan, the Senate Armed Services Committee chairman has been one of the most explicit about what he wants to see: at least 15,000 troops out by the end of this year. Doing less “wouldn’t be the ‘significant’ cut Obama pledged in April and would send a weaker message to the Afghan people and the wrong message to the American people,” Levin said Tuesday.

Lastly, Gerstein claims Obama must address “the professional left.” Excuse me while I laugh hysterically. Obama does not give a sh%t about the progs, because he knows perfectly well they’ll vote for him no matter what he does.

So…. what do you think? Please let us know your reactions to the speech and the policies Obama puts forward. If you can’t stand to watch, listen on the radio. That’s what I do. Or just join in and get the highlights from those who are watching/listening.

You can watch the speech on line at Cspan. I imagine CNN will be streaming it too.