← More Proof that the World is run by the Rich for the Rich
Saturday: People before Profit vs. Pseudo-Pragmatism →

This thread is going to contain live updates on Egypt coming on Al Jazeera English and from Twitter updates.

Al Jazeera is clearly the go to place for information.

The protests were the top story on every major news outlet in the Middle East, but the day belonged to Al Jazeera. The station was the first to report that the governing party’s headquarters were set on fire. Breathless phone reports came in from Jazeera correspondents in towns across Egypt. Live footage from Cairo alternated with action shots that played again and again. Orchestral music played, conveying the sense of a long-awaited drama.

Al Jazeera kept up its coverage despite serious obstacles. The broadcaster’s separate live channel was removed from its satellite platform by the Egyptian government on Friday morning, its Cairo bureau had its telephones cut and its main news channel also faced signal interference, according to a statement released by the station. The director of the live channel issued an appeal to the Egyptian government to allow it to broadcast freely.

Other broadcasters, including CNN, said their reporters had been attacked and their cameras smashed by security forces.

Two major news items right now. Opposition leader Mohamed ElBaradei has called for Hosni Mubarak to step down and says that Egyptian state is in collapse.  He’s asking for a unity government.

Egypt is reaching a “tipping point,” opposition campaigner Mohamed ElBaradei said in an interview with Monocle.

“People are desperate and anxious for change to happen overnight,” ElBaradei, the former chief of the International Atomic Energy Agency, said in the London-based monthly’s February edition. “I see that approaching. People say Egyptians are patient, but you go around the streets of Cairo and you’ll see that the tipping point coming.”

The West is “losing every ounce of credibility when it comes to convincing people here that it is serious about their basic values: democracy, freedom, justice, rule of law,” said ElBaradei, 68. “That fuels extremism. The West doesn’t realize that stability is not based on shortsighted security measures; stability will only come when people are empowered, when people are able to participate.”

There is looting by thugs on motorcycles and it appears to be thugs from the Mubarak’s political party. The Department of Interior’s police force appears to have melted away. There’s no visible presence of the police, only the military.  There are reports that the National Museum with its incredible collection of antiquities has experienced looting and damage.

The museum in central Cairo, which has the world’s biggest collection of Pharaonic antiquities, is adjacent to the headquarters of the ruling National Democratic Party that protesters had earlier set ablaze. Flames were seen still pouring out of the party headquarters early Saturday.

“I felt deeply sorry today when I came this morning to the Egyptian Museum and found that some had tried to raid the museum by force last night,” Zahi Hawass, chairman of the Supreme Council of Antiquities, said Saturday.

“Egyptian citizens tried to prevent them and were joined by the tourism police, but some (looters) managed to enter from above and they destroyed two of the mummies,” he said.

7:38pm Ayman Mohyeldin reports that eyewitnesses have said “party thugs” associated with the Egyptian regime’s Central Security Services – in plainclothes but bearing government-issued weapons – have been looting in Cairo. Ayman says the reports started off as isolated accounts but are now growing in number.

6:50pm As protesters continue to defy curfew, a bystander in Cairo tells Al Jazeera that there are no police left in the capital. Formerly omnipresent traffic police are nowhere to be found. Reports suggest that private property is being seized in locations throughout Egypt.

6:43pm Some of the rarest antiquities in the world are found damaged by looters at famed Cairo musuem.

There are marches on the street. People are dying and being hurt. At least 25 people have been killed in Cairo.  Suez reports 38 deaths.  Alexandria reports 36 killed.  Women are being threatened with sexual assault.   The Children’s Cancer Hospital has also been the target of looting.  Again, it appears that may of the looters are the party police in plain clothes.  AJ has been reporting that some were caught trying to loot richer areas and were found to be carrying ID cards from the State Security forces.   People are still ignoring the curfew.

Probably the most disturbing announcement is that Egypt’s Head Spy is now the VP of the country.  This is the man that has handled torture of US detainees.

“He also has close working relations with the U.S. and a lifetime of experience inside Egypt’s military and intelligence apparatus,” Charles Levinson wrote.

Likewise, the Voice of America said Friday, “Suleiman is seen by some analysts as a possible successor to the president.” “He earned international respect for his role as a mediator in Middle East affairs and for curbing Islamic extremism.”

An editorialist at Pakistan’s “International News” predicted Thursday that “Suleiman will probably scupper his boss’s plans [to install his son], even if the aspiring intelligence guru himself is as young as 75.”

Suleiman graduated from Egypt’s prestigious Military Academy but also received training in the Soviet Union. Under his guidance, Egyptian intelligence has worked hand-in-glove with the CIA’s counterterrorism programs, most notably in the 2003 rendition of an al-Qaeda suspect known as Abu Omar from Italy.

This thread will continue to update during the day.

Category of  I know how they feel:

Zuwail “Education has been the issue in every household in Egypt. Science & research has reached the lowest levels, Egypt deserves better” 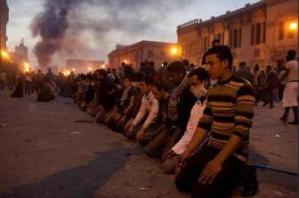 What you are seeing here is very interesting.  These are Egyptian Muslims praying.  Behind them are Egyptian Christians Guarding the neighborhood so they can pray safely.

You may remember that Wonk the Vote wrote a post with a similar theme in Egypt a few weeks ago when Egyptian Muslims surrounded Christian Churches who could celebrate Christmas with out fear of suicide bombers..

63 Comments on “Mohamed ElBaradei Speaks to the Egypt (live updates)”