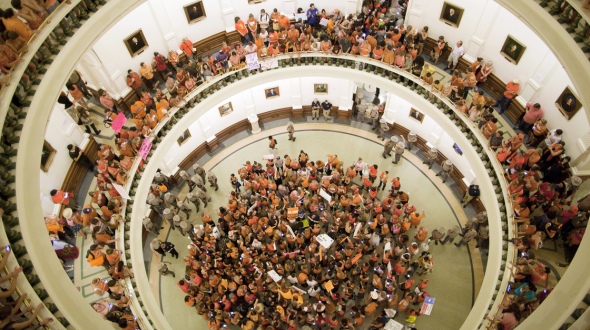 There sure is a lot of news out there for a summer Saturday. Beginning in Texas, the state senate passed a restrictive anti-abortion bill that will threaten women’s lives. The New York Times reports:

AUSTIN, Tex. — The Texas Senate gave final passage on Friday to one of the strictest anti-abortion measures in the country, legislation championed by Gov. Rick Perry, who rallied the Republican-controlled Legislature late last month after a Democratic filibuster blocked the bill and intensified already passionate resistance by abortion-rights supporters.

The bill would ban abortions after 20 weeks of pregnancy and hold abortion clinics to the same standards as hospital-style surgical centers, among other requirements. Its supporters say that the strengthened requirements for the structures and doctors will protect women’s health; opponents argue that the restrictions are actually intended to put financial pressure on the clinics that perform abortions and will force most of them to shut their doors.

Mr. Perry applauded lawmakers for passing the bill, saying “Today the Texas Legislature took its final step in our historic effort to protect life.” Legislators and anti-abortion activists, he said “tirelessly defended our smallest and most vulnerable Texans and future Texans.”

Mr. Perry does not appear to include any “right to life” for adult women in his “effort to protect life,” however. I wonder if anyone has ever asked him one simple question: are women human beings? Forced childbirth is tantamount to slavery in my opinion. Furthermore, childbirth is far more dangerous than abortion, and the restrictions will likely mean that women with problematic late term pregnancies will die or suffer grievous harm. According to the NYT story,

The bill was opposed by many doctors, including leaders of the American Congress of Obstetricians and Gynecologists and the Texas Medical Association; the gynecologists’ group has run advertisements locally that question the scientific underpinnings of the legislation and tell legislators to “Get out of our exam rooms.”

Andrea Grimes writes at RH Reality Check: As Out-Of-State Gawkers Look On, Texas Lawmakers Prepare to Pass ‘Death Sentence’ Anti-Abortion Bill. She describes a young man from Minnesota who traveled down to Texas to watch the show.

This young guy, probably a senior in high school or a freshman in college—I didn’t catch his name—said he was real tired of wearing blue, the chosen color of anti-choice supporters of HB 2. I wore orange that day, the same color as thousands of Texans who have turned up at the capitol to stand up for reproductive rights. I also wore pink earbuds, trying to follow the house debate while waiting in line. Maybe this young guy thought I couldn’t hear him. Maybe he didn’t care.

“I’m looking forward to all this being over so I can wear my orange shirts again!” he joked.

She contrasts his blase attitude with that of Yatzel Sabat, a gay woman of color

who was dragged out of that same gallery Wednesday morning by law enforcement. Sabat was not wearing orange. She was wearing black.

Her limbs bound by state troopers, she screamed in a clear, strong voice, “This bill will kill women!” as the Texas House of Representatives gave its approval to HB 2, passing the devastating legislation along to the state senate for final passage….

This bill will kill. Period.

It will kill Texans who already travel to Mexico to buy abortion pills from flea markets because they are too poor to go to a legal abortion clinic, or unable to take time off work to find a doctor’s office and wait 24 hours between a state-mandated sonogram and an abortion procedure. It will kill Texans who, if HB 2 passes, cannot travel a thousand miles round trip to a San Antonio or Dallas ambulatory surgical center for a safe, legal abortion.

Please read the whole thing if you can.

Next up, the U.S. Congress debates more cuts in food stamps as American children go hungry. From Martha White at NBC News:

For one in seven Americans, the federal government’s Supplemental Nutrition Assistance Program, aka food stamps, is all that stands between them and too little food.

But the complicated calculus of financial survival for the working poor also means any cuts to the roughly $80 billion SNAP, as it’s known, being considered by Congress would be felt well beyond the grocery checkout line. Buying new school clothes, family outings, even getting a toehold in the financial mainstream could be thrown into limbo.

For many of the working poor, wages just don’t go far enough. The National Employment Law project says nearly 60 percent of jobs created in the post-recession recovery pay $13.83 or less an hour, and hourly wages for some low-wage occupations fell by more than 5 percent in just three years.

Food service and temporary employment make up 43 percent of the post-recession job growth, according to NELP policy analyst Jack Temple. “They overwhelmingly pay low wages,” Temple said. “For that lower segment, you’re going to see increased use of safety net programs to make up the difference.”

Read it and weep, folks; and while you do keep in mind that the Federal deficit has been dropping steadily. The only possible reasons for the austerity agenda are to make the rich richer and punish the working poor.

The Snowden saga continues.  Reuters reports that Russia has not yet received an application for asylum from the American hacker/leaker/whistleblower/dissident–or whatever he’s being called at the moment.

Russia kept former U.S. spy agency contractor Edward Snowden at arm’s length on Saturday, saying it had not been in touch with the fugitive American and had not yet received a formal request for political asylum.

Remarks by Foreign Minister Sergei Lavrov signaled Russia is weighing its options after Snowden, who is stranded at a Moscow airport, broke three weeks of silence and asked for refuge in Russia until he can secure safe passage to Latin America.

Washington urged Moscow to return Snowden to the United States, where he is wanted on espionage charges after revealing details of secret surveillance programs, and President Barack Obama spoke by phone with Russian President Vladimir Putin….

“We are not in contact with Snowden,” Russian news agencies quoted Lavrov as saying in Kyrgyzstan, where he attended a foreign ministers’ meeting.

He said he had learned of Snowden’s meeting with Russian human rights activists and public figures at the airport on Friday from the media, “just like everyone else.”

Senator Elizabeth Warren is working on bringing back Glass-Steagall-like regulations on banks. From the LA Times:

Sen. Elizabeth Warren has launched a campaign to make banks boring again as she pushes legislation to enact stricter regulations forcing deposit-taking financial institutions out of the investment business.

The Massachusetts Democrat wants to reinstate the Depression-era Glass-Steagall law, which separated what she called boring checking and savings accounts that are backed by the Federal Deposit Insurance Corp. from risky investment banking.

And after joining three other senators Thursday in introducing a bipartisan bill to do that, Warren went toTwitter to rally support.

She urged her Twitter followers to retweet the message, “Banks should be boring.” She emailed her political backers, asking them to support her 21st century Glass-Steagall Act, which she introduced along with Sens. John McCain (R-Ariz.), Maria Cantwell (D-Wash.) and Angus King (I-Maine).

Yesterday Warren went on CNBC to argue her case with some blonde talking head. Check it out:

As you know, yesterday Malala Yousafzai spoke to the United Nations and told the world: Being shot by Taliban made me stronger (NBC News) 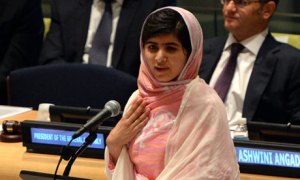 Malala Yousafzai, the Pakistani teenager shot in the head by the Taliban for campaigning for girls’ education, was given a standing ovation at the United Nations Friday as she declared the attempt on her life had only given her strength and banished any fear she once felt.

“Dear friends, on the 9th of October, 2012, the Taliban shot me on the left side of my forehead. They shot my friends too,” she said in her first major public appearance. “They thought that the bullets would silence us, but they failed.”

Speaking on her 16th birthday, she said the “terrorists thought that they would change my aims and stop my ambitions, but nothing changed in my life except this — weakness, fear and hopelessness died, strength, power and courage was born.”

What an courageous, intelligent, and inspiring and young woman she is!

On that note, I’ll turn the floor over to you. What stories are you following today. Please post your links on any topic in the comment thread. Have a stupendous Saturday