From News Hounds, where they watch Fox News so we don’t have to:

Here’s some of the transcript, also from News Hounds:

Regular panelist Gary B. Smith argued for ruthlessness. “Most of the great successes of this country – product wise, service wise – came from not only business people unfettered by the government but ruthless businesspeople.” He cited Thomas Edison, the Wright Brothers and Disney. Then, noting the success of our defense industry, he added, “Why? Because we have ruthless contractors out there that are coming up with this innovative product so they can make millions of dollars. It has nothing to do with government mandates.”

“Here was a man (Jobs) who was hungry. Here was a guy who actually grew up poor. He would have to take sodas to soda bottlers to take the deposit money to go feed himself. This was a guy that clearly, when he had a government out of the way, but he had to take that innovation because he was hungry. Edison, the Wright brothers, everybody that Gary B. was talking about, that’s because people are hungry. In America, people are not hungry anymore because the government is subsidizing them…that’s the problem.”

Wow! And they even left out the part about those Chinese factories where they make the products that made Steve Jobs wealthy.

How Badly Does the World Need iPads? 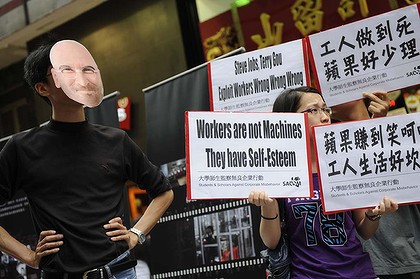 Are these gadgets really worth the sacrifice of workers’ lives? I admit I’m not an Apple enthusiast, but I don’t think so. Last year there was a series of suicides at Foxconn plants and on Friday, there was a fatal explosion at a Foxcomm iPad factory in Chengdu, China, that killed two workers and injured 15 others. Today a third employee died from injuries sustained in the blast.

Company officials said the explosion occurred on Friday May 20 in one of the polishing workshops at the factory, and that the initial finding of a joint investigation task force led by government officials and law enforcement authorities was that combustible dust exploded in a duct.

A little more detail from Mashable.com:

…the Chinese government in Chengdu has taken over the plant, censoring the information flow to the extent that local newspapers aren’t reporting about it.

With numerous workers committing suicide at the company’s Shenzhen-based iPad plant last year, Foxconn attempted to remedy the situation by giving them raises, but still needed to increase the production capacity to meet increasing demand. As a result, the new factory was built, an enormous eight-building complex hastily constructed in a record-breaking 70 days to accommodate the voracious demand for the iPad 2.

Soon after the factory was built…Apple’s inspection team visited the facility, taking two days to inspect the buildings, production lines and “especially the workers’ dormitories.” After its inspection, Apple approved the plant for manufacturing iPads.

After the suicides in 2010, the group Students and Scholars Against Corporate Misbehavior (SACOM) investigated the factories and produced a report (pdf) that documents the horrors of the working conditions in Foxconn’s factories.

According to the Sydney Morning Herald, the study found that slave labor-type conditions are still in effect at the factories. Workers are now forced to sign “no-suicide pacts,” and they are routinely humiliated by “military-style managers.” They may have to work as much as 100 hours of overtime per month, and are still not paid a living wage–they earn only about $186 per month. And Foxconn “routinely” fails to pay workers the correct amounts they have earned. This is after Apple visited the factories and approved the wages and working conditions!

Conditions at Foxconn’s two Chengdu factories, which exclusively produce Apple iPads, were among the worst reported. While nets have been installed to catch suicidal workers, factory staff are reportedly required to sign “no-suicide” pacts which also give licence to Foxconn to institutionalise them if it sees fit.

Workers at Chengdu say they are routinely humiliated and scolded by management. One was forced to stand in a corner with his hands behind his back because he giggled with a colleague. Others have been required to write confession letters to their supervisors after making mistakes and in some cases read the letters out in front of colleagues.

“Some of my roommates weep in the dormitory. I want to cry as well but my tears have not come out,” said 19-year-old Chengdu worker Chen Liming.

Ah Ming, 19, who produces cases for the iPad, said he stands for at least 14 hours a day. He wakes up at 7am to queue for the bus to the factory and it is 9pm by the time he returns home every evening.

have adequate protections to safeguard against occupational health and safety issues such as aluminium dust and harsh reactions from chemicals used in the production process.

“I’m breathing in dust at Foxconn just like a vacuum cleaner. My nostrils are totally black every day,” one male worker said.

From the aptly named “Crave” blog at Cnet.com:

SACOM researchers visited Foxconn plants in Chengdu, where iPads are produced; in Chongqing, a smaller facility making mostly HP products; and Foxconn’s huge campus in Shenzhen, where half a million workers assemble a variety of computers, mobile phones, and additional products for Apple, HP, Nokia, Dell, and others. The researchers claim to have observed a number of problems at the Chengdu facilities in particular:

Workers do not have adequate training on usage of chemicals and do not have regular on-post health examinations. A number of interviewees even complain they suffer from allergy, but the management does not probe into the adverse health impacts of workers. Workers also highlight the problem of poor ventilation and inadequate personal protective equipment.

While SACOM notes the lack of ventilation as a possible threat to workers’ respiratory health, it appears that it may also have been a contributing factor to Friday’s explosion, which reportedly was centered in the “polishing” section of Foxconn’s facilities.

According to the report, the polishing department is filled with aluminum dust and there is inadequate ventilation.

Both aluminum and magnesium are commonly used ingredients in industrial polish–magnesium is a highly flammable metal used in fireworks, flares, and flash powder. A buildup of such dust due to improper ventilation could have created dangerous conditions.

I don’t know about you, but I’m very glad I don’t have an iPad, because if I did I’d be tempted to trash it right about now. If this is what it takes to produce a gadget that appears to be little more than a glorified cell phone that doesn’t do much other than provide entertainment and status to its users, I say it’s not worth it.