I’m hoping that Wisconsin represents a tipping point in Republican overreach.  Fourteen Democratic Senators from Wisconsin are holing up in a Best Western in Rockford Illinois while the Governor and State Senate President send out the state troopers to find them and bring them back for a vote they will lose. That’s right.  A United States Governor is using police tactics on elected officials.  He’s also ready to call out the national guard to deal with a lawful gathering of students, teachers, police officers, fire fighters, nurses, civil engineers, doctors, and file clerks.  It’s six am.  Do you know where your constitutional rights are?

Will this be the day that Republican attempts to remove collective bargaining rights from government workers ends? TPM has evidence that right wing Republican Governor Scott Walker Ginned up a Budget battle to bust state employee’s unions by passing irresponsible tax cuts the moment he hit the office.

“Walker was not forced into a budget repair bill by circumstances beyond he control,” says Jack Norman, research director at the Institute for Wisconsin Future — a public interest think tank. “He wanted a budget repair bill and forced it by pushing through tax cuts… so he could rush through these other changes.”

“The state of Wisconsin has not reached the point at which austerity measures are needed,” Norman adds.

In a Wednesday op-ed, the Capitol Times of Madison picked up on this theme.

In its Jan. 31 memo to legislators on the condition of the state’s budget, the Fiscal Bureau determined that the state will end the year with a balance of $121.4 million.

To the extent that there is an imbalance — Walker claims there is a $137 million deficit — it is not because of a drop in revenues or increases in the cost of state employee contracts, benefits or pensions. It is because Walker and his allies pushed through $140 million in new spending for special-interest groups in January.

Meanwhile, Republicans are escalating the rhetoric on budget doom and gloom–after pushing for draconian tax cuts for billionaires in December–on the Federal level too. Boehner is talking shutting down the Government once again.

House Speaker John Boehner (R-Ohio) on Thursday ruled out a short-term government-funding bill that maintains current levels of federal spending, escalating a standoff with Democrats and President Obama that could result in a government shutdown.

“I am not going to move any kind of short-term [funding bill] at current levels,” he told reporters at his weekly press conference.

Let’s hope we get the same kind of Senate leadership on the national level as Wisconsin workers are getting from their Democratic Senators.  How do you build an economy when the decision makers do things that remove incomes and jobs from ordinary Americans?

Paul Krugman’s “Willie Sutton Wept” is a must read. He explains three things you need to know about the current budget debate.  I think it’s an important read because I spent some time last night listening to multiple news outlets filled with chattering class idiots insisting that all economists think the deficit is the most pressing problem the country faces.  I personally can’t name ONE economist that does.

There are three things you need to know about the current budget debate. First, it’s essentially fraudulent. Second, most people posing as deficit hawks are faking it. Third, while President Obama hasn’t fully avoided the fraudulence, he’s less bad than his opponents — and he deserves much more credit for fiscal responsibility than he’s getting.

About the fraudulence: Last month, Howard Gleckman of the Tax Policy Center described the president as the “anti-Willie Sutton,” after the holdup artist who reputedly said he robbed banks because that’s where the money is. Indeed, Mr. Obama has lately been going where the money isn’t, making a big deal out of a freeze on nonsecurity discretionary spending, which accounts for only 12 percent of the budget.

But that’s what everyone does. House Republicans talk big about spending cuts — but focus solely on that same small budget sliver.

And by proposing sharp spending cuts right away, Republicans aren’t just going where the money isn’t, they’re also going when the money isn’t. Slashing spending while the economy is still deeply depressed is a recipe for slower economic growth, which means lower tax receipts — so any deficit reduction from G.O.P. cuts would be at least partly offset by lower revenue.

The whole budget debate, then, is a sham. House Republicans, in particular, are literally stealing food from the mouths of babes — nutritional aid to pregnant women and very young children is one of the items on their cutting block — so they can pose, falsely, as deficit hawks.

We have a staggering rate of unemployment with underlying employment trends that are not good.  Some sectors of the economy, some groups of workers, and many states are in dire straights.  I would never believe that a group of people that have lived so close to the precipice that was The Great Depression can be suggesting what they are suggesting now.  Either they seriously want to take the country down or they are so stupid and corrupt that they know not what they are doing and they don’t care what they are doing.  Our economy is not by any real standard experiencing a good and sustained recovery from a devastating financial crisis.  There is weakness in nearly every sector. The only way to grow the economy and to eventually shrink the deficit is through job and economic growth.  Every decision maker that I hear these days is aiming policy in the opposite direction and taking away every single means available to make it so.

I’d just like to ask you one question.  Was your future destroyed by the burden of paying for the debt and deficits that resulted from World War 2?  We’re still paying that down so we should have had a really really horrible economy for the last 60 years if you follow the line of thought of these people screaming about the deficit.  Would you have rather they didn’t run any deficit and just called off the entire Omaha Beach thing?  Would your life had been better now for that decision?  Do you think your life would be better if they’d have not ever offered student loans, or PBS,  or undertaken the burden of an interstate system?  Do you feel your life is burdened by paying for the Interstate system?

Some times you have to take on long term debt for the big things.  We have a big country with a big GDP.  We can handle the debt.  What we can’t handle is sustained loss of jobs and incomes for the majority of people.   They’re downsizing all of us and upsizing their billionaire friends lives.  Every one of us should be willing to take to the street like the folks in Wisconsin to stop that.  Every Senator and Congressman that believes in the American Middle class should be willing to shut down the workings of congress if it’s necessary to stop this assault on public goods and public servants. 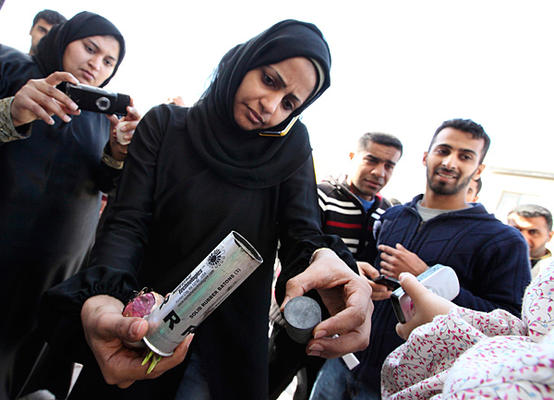 Pro-democracy protesters in the small monarchy of Bharain continues to experience the full force of government oppression in their struggle for reform.  American produced tear gas came into play yet again.

Armored cars are now patrolling the streets of the capital, and all further protests have been banned by the authorities. But sporadic clashes have occurred in different parts of the city.

A statement from the Ministry of Interior claimed that the authorities had attempted to negotiate a peaceful end to the demonstration.

“Security forces evacuated the area of Pearl Roundabout from protesters, after trying all opportunities for dialogue with them, in which some positively responded and left quietly,” the statement read.

However, human rights activists were quick to dismiss these reports, and Al Jazeera reported that the protesters were asleep when the police raid began and that medical staff attending the wounded were among those beaten by police.

The violence comes on the fourth consecutive day of protests since demonstrators staged a ‘Day of Rage’ on Feb. 14, with two protesters killed earlier in the week. In the aftermath of these fatalities, Bahrain’s King Hamad bin Issa issued an apology and promised an investigation into excessive police violence.

Bahrain is an interesting Gulf Nation in that it has predominately Shia Muslim but the ruling family is Sunni.  Sunnis enjoy the majority of the wealth and benefits here as was the case in Iraq so there are tensions between the two sects. Most of the Gulf states are predominately Sunni. Sunnis represent the middle class here while Shia are poor.  There appears to be some interesting bedfellows made as a result of the protests.  Bahrain is an important US alley because of its strategic location as home for the US Navy’s fifth fleet.  It has a lot of natural gas but a small and dwindling amount of petroleum, as such, it is not as wealthy as many of its neighbors. The Al Khalifah dynasty appears unwilling to compromise at this point, but time will tell.

The SEC may be getting ready take Freddie Mac officials to court.

The Securities and Exchange Commission has escalated its investigation into mortgage financer Freddie Mac’s disclosures to investors and has notified at least one former official that it intends to file civil charges against him.

Anthony “Buddy” Piszel, who was chief financial officer of Freddie Mac from 2006 until 2008 when the government placed it in conservatorship, received a “Wells notice” from the SEC, according to Corelogic, a California company where he is chief financial officer. A Wells notice is an indication that the SEC staff intends to recommend to its five-member commission that it file civil charges. Corelogic disclosed the Wells notice on February 10 and said Mr Piszel had submitted his resignation, but would stay until June.

The SEC has investigated Freddie before for possible fraudulent accounting practices and problems related to disclosure and corporate governance. Freddie Mac was formed in the 1970s to give money to mortgage lenders to be used for house loans. It’s the largest buyer and packager of house loans in the mortgage market.  It is publicly held and currently bankrupt.

So, the world around us changing.