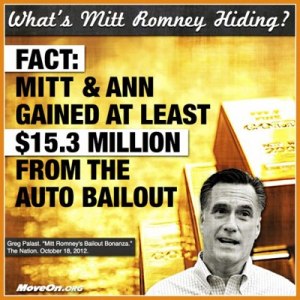 The union chief says, “The American people have a right to know about Gov. Romney’s potential conflicts of interest, such as the profits his family made from the auto rescue,” “It’s time for Gov. Romney to disclose or divest.”

The ethics complaint is based on investigative research by Greg Palast, published in The Nation on October 17. Briefly:

The Romneys’ gigantic windfall was hidden inside an offshore corporation inside a limited partnership inside a trust which both concealed the gain and reduces taxes on it.

According to ethics law expert Dan Curry who drafted the ethics complaint, Ann Romney does not have a federally-approved blind trust. An approved “blind” trust may not be used to hide a major investment which could be affected by Romney if he were to be elected President. Other groups joining the UAW and CREW include Public Citizen, the Service Employees International Union (SEIU), Public Campaign, People for the American Way and The Social Equity Group….

Singer’s fund ended up making $1.27 billion, after which he moved all Dephi production to Mexico along with 25,000 UAW jobs. The goal of the ethics complaint is to force the Romneys to reveal how much profit the made off this sleazy deal.

Feel free to use this as an open thread.