Last Friday historian Douglas Brinkley testified before the House Natural Resources Committee on the topic of preserving the Arctic National Wildlife Refuge. The Republicans, of course, have been trying for years to open it up to oil drilling. Brinkley, whose latest book is The Quiet World: Saving Alaska’s Wilderness Kingdom, 1879-1960, argued that preserving one of the last truly wild places in the U.S. should trump helping the oil companies make more money.

Alaska Rep. Don Young (who had skipped most of the testimony) broke into Brinkley’s presentation, calling the historian by the wrong name and saying his testimony was “garbage.” Then the two had a hilarious shouting match. IMO, Brinkley came out the winner, but judge for yourself:

Brinkley: It’s Dr. Brinkley. Rice is a university – I know you went to Yuba [a community college] and you couldn’t graduate.

Young: Well, okay, I can call you anything I want if you sit in that chair. You just be quiet! You be quiet!

Brinkley: You don’t own me. I pay your salary.

Young: I don’t own you, but I can tell you right now—

Finally, Brinkley said he was surprised to

hear a congressman today say there’s nothing in his district. It’s boring. It’s flat. It’s not exciting. I don’t know a representative who doesn’t love their district. Every state in America’s landscape is beautiful if you love it. But some people love money more than their homeland or where they live, and I’m afraid that that’s why this fight has to keep coming up 50 years later, we’re still trying to tell people the Arctic refuge is real. It belongs to the American people.

On Friday evening, Brinkley appeared on The Ed Show on MSNBC to discuss his experience with Rep. Young.

A week later, the Congressional cage match is still causing controversy. At the Minnesota Post, Don Shelby, a friend of Brinkley’s wrote a column about the dust up.

Brinkley told me he knew that Congressman Young, at another hearing, had waved a walrus penis bone at Mollie Beattie, the incoming chief of the Fish and Wildlife Service. Brinkley may have read the Rolling Stone article about Young that quotes the congressman as saying, “Environmentalists are a self-centered bunch of waffle-stomping, Harvard-graduating, intellectual idiots.” The quote continues, “[They] are not Americans, never have been Americans and never will be Americans.” ….

Brinkley should not have been surprised that Congressman Young showed up late and missed the bulk of the historian’s testimony. Young is often cited as the congressman missing more votes than any other member of the House. Brinkley would have known that Young was the co-sponsor, with discredited Alaska Sen. Ted Stevens, of the bill to pay for the infamous “bridge to nowhere.”

Brinkley told me: “Everyone knows that Young is just a menacing blowhard. He has a history of being rude, he browbeats and he’s snotty toward anyone who cares about the environment.”

I asked Brinkley if he was surprised that Committee Chair Doc Hastings took Young’s side and continued lecturing the historian. “No,” said Brinkley. “They are tied together at the hip. They are both oil company factotums. They are a tag team.”

that his students applauded when he walked into class. “I have received now hundreds and hundreds of emails from people all over, I’ve not received one negative one,” he said. “I’ve had my entire Rice University and including Texas conservatives cheering me on for standing up to his bullying tactics.”

I’m not usually much of a fan of Brinkley’s, but I have to applaud him on this one. I don’t care if he’s doing it to sell books. Greedy, incompetent politicians like Don Young need to be revealed for what they are: pigs at the trough. 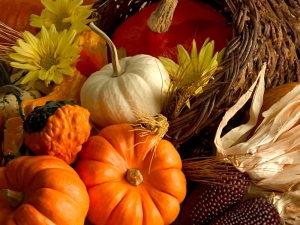 Happy Thanksgiving! I hope you all have a wonderful day today.

Even though the news has been discouraging for a long time now, we probably all have something to be grateful for. I know I do. I’m going to share some of what I’m grateful for today, and I hope everyone who comes around to to our “little blog that could” today will do likewise.

First, I’m very grateful today for all of you who have helped us get up and running these past few weeks!

I’m grateful to have had the chance to pursue my education in the second half of in life. I’m grateful for my mother-in-law, who was there for me when I needed a place to live after my husband and I split up. I cared for her for 18 years, and I’m very grateful to have had her in my life, and all that I learned from her. Because she gave me a place to live, I was able to return to college and eventually earn a PhD in psychology. I’m also grateful for the state and federal government help I received during the time I was in school.

I’m grateful that I’ve been sober since May, 1982. If it weren’t for my sobriety, I wouldn’t have any of the other things I’ve mentioned. I was very fortunate to be able to turn my life around beginning 28 years ago.

As you know, I’m not that happy with how things are going for our country right now. I think our political establishment is beyond corrupt and that corrupt corporations are ruining our country and perhaps the world. I’m so thankful for the internet–without the ability to communicate with other people and share my anger at our political system, I don’t know how I would have survived. So I’m very grateful to many bloggers and commenters who have helped me know that I’m not alone in my anger and frustration.

Here are a few events in today’s news that I’m grateful for:

DeLay was found guilty of money laundering and conspiracy to commit money laundering, court bailiff Gilbert Soto said. He was accused of funneling $190,000 to help elect Republicans to the state House and Senate in 2002.

At the outset of the trial, DeLay predicted the jury would clear him, and he remained unrepentant after learning the verdict..

“This is an abuse of power. It’s a miscarriage of justice,” DeLay told reporters. “I still maintain that I am innocent, that the criminalization of politics undermines our very system, and I’m very disappointed in the outcome. But you know, it is what it is, and we will carry on and maybe we can get it before people who understand the law.”

HIV Prevention Pill A Big Development in Communities of Color

A new study by the National Institutes of Health suggests that a pill, known as Truvada, may be able to prevent HIV infection for gay and bisexual men. Host Allison Keyes talks with Dr. Jonathan Mermin of the Centers for Disease Control and Adolph Falcon of the National Alliance for Hispanic Health about the drug and what it could mean for communities of color which are disproportionately impacted by HIV/AIDS in the US

You can listen to the interview at the link.

Nations band together to save tigers, eye comeback by 2022

The wild tiger population is less than 4 percent of what it was a century ago, and leaders in 13 nations are taking a stand against the poaching and habitat destruction that have decimated the majestic predators’ numbers….

With the conclusion of a high-profile summit, attracting guests as notable as actor Leonardo DiCaprio and Russian Prime Minister Vladimir Putin, governments and conservation groups pledged $327 million with the goal of doubling the wild tiger population by 2022….

Poaching, illegal trade and habitat destruction have forced the animal to the brink of extinction, according to the Global Tiger Initiative, which estimates that wild tigers exist today in less than 7 percent of their historic range.

“I am confident that we will look back on this day as a turning point in the effort to save one of the world’s best-loved animals,” World Wildlife Fund Director Jim Leape said.

As with past document dumps by Wikileaks, U.S. officials expect that major international news outlets have been provided the documents in advance and that their news stories about what the documents contain will be published around the same time that the website reveals its cache of documents.

The White House and State Department are concerned because the documents may contain negative remarks made by U.S. diplomats about corrupt foreign leaders.

Army Pvt. Bradley Manning was arrested in June and charged with leaking a classified video of a 2007 U.S. helicopter attack in Baghdad that killed several civilians. There has been speculation that Manning also may have been the source for the Iraq and Afghanistan military intelligence reports released by Wikileaks.

He also may be the source of the State Department cables, because prior to his arrest Manning boasted in e-mails to a former hacker that he had passed along thousands of diplomatic cables to Wikileaks.

I’m sorry that some people in the government will suffer embarrassment, but the best disinfectant is sunshine.

U.S. prosecutors Wednesday arrested an employee of an “expert networking firm” on charges that he promoted the firm’s services by arranging for corporate executives to leak inside information to hedge funds.

According to a complaint unsealed in Manhattan federal court, prosecutors claimed that Don Ching Trang Chu, also known as Don Chu, who worked at California-based Primary Global Research, had arranged for hedge funds to get tips on companies including Atheros Communications, Broadcom Corp and Sierra Wireless.

The arrest comes amid a wide-ranging probe by U.S. authorities into potential insider trading at hedge funds, mutual funds and expert networks.

Great. Now let’s hope he rolls on the higher ups and the feds bust them too.

Federal authorities, intensifying an insider-trading investigation, are demanding trading and other information from some of the nation’s most powerful investment firms.

Hedge-fund giants SAC Capital Advisors and Citadel LLC, big mutual-fund company Janus Capital Group Inc. and Wellington Management Co., one of the nation’s biggest institutional-investment firms, have received subpoenas from the Manhattan U.S. Attorney’s office seeking trading, communications and other data as part of a broad criminal investigation, according to people familiar with the matter.

Such expert-network firms set up meetings and arrange calls between traders seeking an investing edge and current and former managers from hundreds of companies. The FBI is seeking information about a Primary Global consultant and his hedge-fund clients, these people say.

What are you grateful for today? Feel free to share your news links as always, and have a terrific Thanksgiving Day!!!!