It’s been nearly a month since Ida turned Southeast Louisiana into a gigantic mess. It’s cooler now and sunny,  Fall seems to have treated us with an on-time appearance. My streets are free from the garbage that was not picked up for weeks on end.  Yesterday, they removed all the tree debris from the neutral ground.   There were some huge trunks there from one of the neighbor’s very old oak trees. They probably were riddled with Formosan Termites.

It continues to be difficult watching White Male Republican Christianists and their enablers tear at the very foundation and dream this country was built on. We should be a country where just about anyone should be able to come, seek refuge, and work their way up into the middle class, at least.  Our outcomes shouldn’t depend on our race, our gender, who we love, and the beliefs we hold. We are fighting the same fights for a more perfect union and watching the white male patriarchal nationalists continue to fix the game in their favor, morally objectionable people get thrown onto court benches for holding extremist positions. We’re reminded daily of this as the same group of suspects in state governorships rev up extremist laws that should be unconstitutional with the purpose of handing the decision to stacked courts. 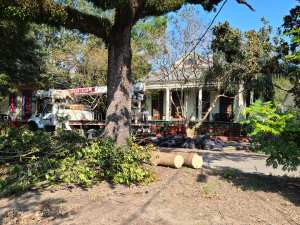 There is now an intersection between two of the most objectionable and worthless Supreme Court Justices with a penchant for sexually assaulting women.  Anita Hill is back in the headlines with a new book. BB pointed me to this article last night in The Atlantic by Anita Hill herself.  “What It Was Like for Me to Watch Christine Blasey Ford’s Testimony. From my own experience in 1991, I knew that her life would never be the same.” No matter what we do by changing laws and providing prevention and legal means to change the situation, predatory men still get rewarded by the system. She views the Kavanaugh hearing through the eyes of Christine Blasey Ford.

I had never spoken with Ford directly, but once the Judiciary Committee chair, Chuck Grassley, who also had heard my testimony about Clarence Thomas three decades earlier, announced that Ford would testify, emails flooded my inbox. Some suggested politely, “I would like to see you sitting behind Dr. Ford as she testifies on Thursday.” Others argued that my presence “would certainly send a message to those, dare I say, incorrigible, ignorant men who did not listen to your honest pleas to be heard those many years ago.”

My instinct told me that those “ignorant men” and many others would make political hay out of any gesture I made to show my support for Ford. I recalled the claims from 1991 that left-wing, pro-abortion-rights feminists had duped me into testifying about Thomas’s behavior. I was certain that Ford was hearing something of the same.

My biggest hope for the day was that it would be a completely different experience for her than it had been for me—that a lot of hard work by activists, researchers, lawyers, and others raising claims and demanding change in their workplace in the 27 years since I had faced that same Senate committee had resulted in the evolution of a new awareness of gender violence. But with some of the same senators from 1991 sitting on the Judiciary Committee and with Grassley in charge, I could not bring myself to be optimistic that the entire committee had evolved.

The 1991 committee was entirely made up of white men, and men in the Senate outnumbered women 98 to two. That the 2018 Senate Judiciary Committee included women, one of whom was Black, as well as a Black man, gave me hope for a greater understanding of gender and power, as did the fact that 23 women were Senate members. I wanted to believe that, between 1991 and 2018, enough senators had read the Department of Justice or CDC reports about the prevalence and health consequences of sexual violence to counter the committee’s naysayers.

We know how that turned out.  Margaret Sullivan–writing for The Washington Post–refers to the two women as a “club of two”.

During a recent conversation recorded for a new podcast, Hill, now 65 and a Brandeis law professor, told Ford, 54 and a psychology scholar at Stanford and Palo Alto University, that she felt a sense of overwhelming kinship as she watched the 2018 testimony — a feeling that she knew was shared by a large community of like-minded women.

“A spiritual solidarity,” Hill called it.

Their conversation is a high point in “Because of Anita,” a new four-part podcast series that debuts in October. I listened to a segment of it Thursday and found it moving, instructive and — as podcasts sometimes can be — surprisingly intimate. The two had met and spoken before but not, until now, for the public to hear.

The conversation took place on Zoom in late August with Hill and Ford in their home offices in Massachusetts and California. The podcast hosts — activist and scholar Salamishah Tillet and journalist Cindi Leive, longtime editor of Glamour magazine — were in San Diego and Brooklyn.

Hill and Ford discussed the intensity of their experiences, and how it lingered far beyond their moments in the harsh spotlight — moments remembered by many Americans as a still image of each woman with her right hand raised.

They also agreed on their motivation: that it was not, at heart, to persuade those who would vote for or against the nominees but rather, a desire to be clear and honest about their experiences — to simply say what they knew and not to be attached to the outcome.

The most obvious outcomes, of course, were similar. Thomas and Kavanaugh both were confirmed by narrowly divided Senate votes: 52 to 48, and 50 to 48, respectively.

But both Hill and Ford sound as if they have made their peace with that — and say they would do it again, though they acknowledge how much the searing experiences have changed their lives. 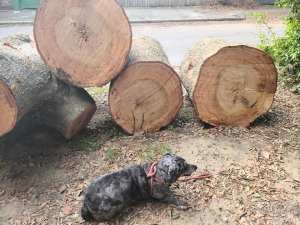 Hill is still fighting the good fight against gender violence.  Samantha Simon has this to say about her in a piece for InStyle.  This is an interview with Hill who is part of a series speaking with “badass women”.

“Once you get on this track, you don’t stop. You just realize there’s something else to accomplish,” she says. “Right now, I’m feeling like I have time. I wish for everyone the feeling I have about how I live my life: I can do things to make the world better for other people, and that’s really a gift. Not everyone feels they have that kind of power.
The concentration of power — who holds it and the ways they use it to harm those who don’t have enough — has been central to Hill’s work all along. “This has been a public crisis long before the #MeToo movement, and people are still facing resistance to their ideas or identities in the workplace and can’t come forward,” she says. “As long as those conditions exist, I will be doing this work.”

That’s what I think it feels like for all of us working on Social Justice Issues. We’re fighting and refighting the same things. For example, some on needs to tell Lindsey Graham whipping black people with a leash went out with the end of the civil war.

What a pathetic statement by the President of the United States regarding our mounted Border Patrol agents trying to control lawlessness at our border.https://t.co/MjpANM4BWc

There is nothing I can say to folks that try to lessen the impact of that image. It’s just another way we see another era in our country when people could be property.   It’s not supposed to be that way anymore.

I’m going to end here with something that happened to me this week. On Tuesday, I was sitting in my little virtual office online waiting patiently to see students or help students. The usual chat request came in with only the letter e typed in. What followed was this question. “Are you a (n-word)? Of course, the university is investigating it. It rattled me more than I thought possible given the amount of hate I’ve seen all around the Quarter when the White Male Christianists come to hate on women and the GLBTQ community. But, it reminded me that none of us really have a safe space which really, is what everyone wants.  Protecting privilege as vehemently as today’s Republicans do is just hard to deal with day-in-and-out.  But we are the majority.  That is what scares them. We must use our power as the majority and stop them. If I was a Christian, I would sure be pushing back on what they say is the path of Jesus. I’m allied with kindness, compassion, and civility.