Well, this is another fine mess that Republicans have gotten us into!  I watched coverage of a meeting of the St Louis County Council meeting with horror.  It was filled with women with that Clairol FoxNewsBlonde look and screaming red-faced old men.  It was about the recently reinstated mask mandate that the Council threw out over the objections of its Public Health Officials and the screaming, taunting, racist screams of the previously mentioned burbie nutterz.

This was after I finished a zoom chat with the Drs and my new granddaughters. I’ve been trying to tell myself that kids used to go West in this country and it took months for the Pony Express to get letters between there and New Orleans so this is better than that.  But, then I remember this doesn’t have to be this way. It’s those shrieking whackos that are killing people and preventing us from having normal lives.  They’re also killing us with misinformation so the reticent become more firmly afraid of the vaccine.

This is from NBC: “St. Louis County health director says he was called racist slurs during mask order meeting. “Public health is not the enemy. We don’t deserve to be targeted,” said Faisal Khan, the acting health director.”  If you do watch the video, notice that you’re likely witnessing a superspreader event worthy of Trumperz rallies.

The director, Faisal Khan, was asked to present at Tuesday’s public meeting as council members considered terminating a mandate that St. Louis County Executive Sam Page put in place to slow the spread of the Covid-19 delta variant.

Khan said in a phone interview on Thursday that the crowd was rowdy before the meeting even began because some of them had attended a political rally held outside the venue.

“The anger was already palpable,” he told NBC News. “By the time I was asked to come to the podium, the train had left the station and it was only going to go one way.”

Khan detailed what happened at the meeting in a letter to Council Chairwoman Rita Days, who was in attendance.

“My time before the Council began with a dog-whistle question from Councilman Tim Fitch, who said he wanted to emphasize for the assembled crowd that I was not from this country,” he wrote in the letter.

Khan, who said he became a U.S. citizen in 2013, wrote that Fitch should have known most of the people in the crowd were “from the ‘MAGA’ movement” because they kept chanting “Trump 2024.”

Khan wrote in his letter that during the meeting Fitch’s friend Mark McCloskey posted on social media that mask mandates are “un-American.” Khan told Days that he believes Fitch and McCloskey’s actions were an attempt to “stoke xenophobia against me.”

I spoke with Dr. Faisal Khan, acting St. Louis County Health Director, earlier this afternoon. Here's what he had to say about "flipping the bird" and how he felt walking out of that meeting. pic.twitter.com/eR3lfFtXFG 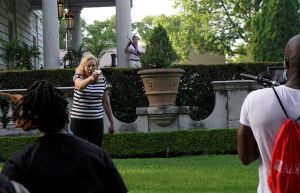 You may remember Mark McCloskey from his previous racist attack where he waved a semi-automatic rifle with his wife at a Peaceful Black Lives Matters Marches.  His wife wears that same shade of Clairol FoxNewsBlonde. Well, they got to speak at the RNC and now they’re back spreading the racism as freely as possible while threatening public health officials.

The NBC article above notes that the same level of threats aimed at folks working elections is now aimed at public health officials.

Throughout the coronavirus pandemic, public health officials have been targeted and attacked. This week, prosecutors in Maryland announced a man had been arrested and charged in federal court with sending emails that threatened to harm and kill Dr. Anthony Fauci, National Institutes of Health Director Dr. Francis Collins, and their families.

Khan said he believes they have been used as pawns for what some people have turned into a political battle.

“We’ve received so many threats, of all kinds, it is jarring. Public health is not the enemy. We don’t deserve to be targeted,” he said. “We are in the midst of the worst public health crisis to hit the world in 100 years. We should not be worried about our own safety in deliberative sessions with legislative officials. That really is a sad reflection of society in the United States.”

Khan said he wrote his letter with the hopes that it “would jolt members of the Council into realizing that orchestrating hostile meetings and firing up the crowd doesn’t really serve any purpose.” He has asked Days to investigate what happened at Tuesday’s meeting and to enforce measures so it does not happen again.

Today’s WaPo had an excellent article citing internal CDC data on the Delta variants and the threat this variant and others pose to our health.  It is also interesting to note that Europe and the UK are doing far better containing the pandemic than we are at this point. This is the headline: “‘The war has changed’: Internal CDC document urges new messaging, warns delta infections likely more severe. The internal presentation shows that the agency thinks it is struggling to communicate on vaccine efficacy amid increased breakthrough infections”

The delta variant of the coronavirus appears to cause more severe illness than earlier variants and spreads as easily as chickenpox, according to an internal federal health document that argues officials must “acknowledge the war has changed.”

The document is an internal Centers for Disease Control and Prevention slide presentation, shared within the CDC and obtained by The Washington Post. It captures the struggle of the nation’s top public health agency to persuade the public to embrace vaccination and prevention measures, including mask-wearing, as cases surge across the United States and new research suggests vaccinated people can spread the virus.

The document strikes an urgent note, revealing the agency knows it must revamp its public messaging to emphasize vaccination as the best defense against a variant so contagious that it acts almost like a different novel virus, leaping from target to target more swiftly than Ebola or the common cold.

The article really is the must-read today.  You can read about the CDC and its problems with communicating the situation. You can also read about the belief that the Delta Variant is likely to be more deadly which has not been widely communicated.  The article emphasizes that Delta is as contagious as chickenpox.

There is more about this in today’s NYT: “C.D.C. Internal Report Calls Delta Variant as Contagious as Chickenpox.  Infections in vaccinated Americans are rare, compared with those in unvaccinated people, the document said. But when they occur, vaccinated people may spread the virus just as easily.”  So, we all need to mask up again.

The Delta variant is much more contagious, more likely to break through protections afforded by the vaccines and may cause more severe disease than all other known versions of the virus, according to an internal presentation circulated within the Centers for Disease Control and Prevention.

Dr. Rochelle P. Walensky, the director of the agency, acknowledged on Tuesday that vaccinated people with so-called breakthrough infections of the Delta variant carry just as much virus in the nose and throat as unvaccinated people, and may spread it just as readily, if less often.

But the internal document lays out a broader and even grimmer view of the variant.

The Delta variant is more transmissible than the viruses that cause MERS, SARS, Ebola, the common cold, the seasonal flu and smallpox, and it is as contagious as chickenpox, according to the document, a copy of which was obtained by The New York Times. 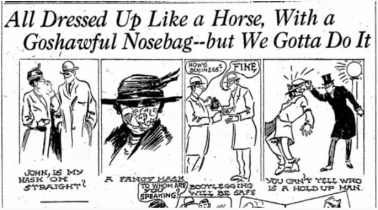 Many businesses want to remain open while protecting workers and others.  Here are some other things you may want to read.

CNN:
‘I am furious with myself’: Unvaccinated Covid patient describes the exhausting illness

Here is the story, with more information: https://t.co/1GHooKqVZr

I decided to basically still stay home and not go indoors anywhere unnecessary when I started seeing people pour into New Orleans for Independence Day. The clusterfuck of people driving cars with license plates from the surrounding plague rat states pretty much disturbed me to the point of it.  I had thought that May and June’s forays to the hospital would likely be my last mask-wearing adventure. This week, I washed all my cloth masks and now will actually use the double-up method. They’ve started canceling events here. Frankly, I don’t know when I’ll feel like going into a restaurant, let alone a bar. I’m still trying to time my visits to the corner stores carefully and have committed myself to order groceries and get them delivered to the kitchen door.  I’m glad I still can teach university online because there’s no intention here to mandate masking or vaccines at public universities.  I still enjoy walking Temple maskless though.  That’s my one big three times a day outing.

So, what are your plans?  Granted, I live in Louisiana where the wipipo are basically plague rats and Petri dishes. I shudder at what I could bring up to Seattle and my family including my sister and her husband who have had various medical problems recently.

18 Comments on “Finally Friday Reads: Mask up! Vax up!”