“The Twins, Kate and Grace Hoare” the sisters wear face coverings as they prepare for an outing with their elegant dog .John Everett Millais (1829–1896)
The Fitzwilliam Museum

I’m off to the hospital this afternoon for a series of those “baseline” tests which basically signal that I can look forward to going downhill from whatever peak they establish. I will be wearing a mask there and on the way there and back home in my Lyft ride. It’s a different reality this month.  I’m drinking my coffee reading about Louisiana teens getting their vaccinations today.  The media is showing yesterday’s presser picture of the day which is basically a shot of President Biden and Vice President Harris mask-free.

Last year, masks were everywhere.  This includes the Fitzwilliam Museum in Cambridge, eastern England that closed during the peak of the pandemic and masked some of its collection for view on its website. Today’s art comes from the coverage given the show by CNN in June of 2020..

I’m not sure I’m completely ready to give up my mask yet.  I listened to the same conversation between Rachel Maddow and Lawrence O’Donnell. I’m pretty sure I will still wear it for my trips to the corner stores. My other outings were solo dog walks so they were always maskless but with a mask in the pocket. Yesterday, Temple and I celebrated our 7th Templeversary. That’s the day I called up the Bunkie pound and said I want to adopt that dog! Today, we look forward to walks without worrying about outfits with pockets!

So, we the vaccinated, rarely need to wear masks according to the CDC.  This is from David Leonhardt at the New York Times. 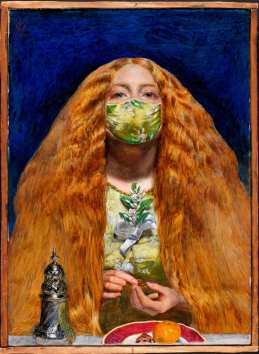 John Everett Millais’ “The Bridesmaid” (1851) with a decorated facemask to match her decorative dress. Credit: The Fitzwilliam Museum/FME, Cambridge

The C.D.C.’s intricate list of recommended Covid behavior has baffled many Americans and frightened others, making the guidance less helpful than it might have been.

Yesterday, the agency effectively acknowledged it had fallen behind the scientific evidence: Even though that evidence has not changed in months, the C.D.C. overhauled its guidelines. It said fully vaccinated people could stop wearing masks in most settings, including crowded indoor gatherings.

The change sends a message: Vaccination means the end of the Covid crisis, for individuals and ultimately for society.

If you’re vaccinated, you can safely get together with family and friends, mask-free. You can nuzzle your grandparents or your grandchildren. You can eat in restaurants, go to the movies and attend religious services. You can travel. If you’re vaccinated, Covid joins a long list of small risks that we have long accepted without upending our lives, like riding in a car, taking a swim or exposing ourselves to the common cold.

I’m still having a bit of reaction when even a friend I know is well vaccinated crossed the street with his dog to greet Temple and me.  I knew full well he got it back a few months ago and likely before me. It was the same reaction my neighbor had to me last month when we both got fully vaccinated and met up for a neutral ground chat.  She reached for her mask and said we’re okay.  We’d spent most of the year having small dinners on her porch or dining room properly socially distanced with hand sanitizer and the entire routine.  It’s easy to move forward along these lines.

I’m thrilled my youngest is going to see her very pregnant sister over Memorial Day.  The thought of getting on planes with strangers from the feral Trumpist outback still frightens me.  I had a year of knowing who was crazy and who was prudent with that mask and I’m not sure I’m ready to give that up.

“La Liseuse” (The Reader) by Belgian painter Alfred Émile Léopold Stevens in 1860, as imagined in the pandemic. Credit: The Fitzwilliam Museum/FME, Cambridge

Russell Berman–writing for The Atlantic–asks “Is This the End? The CDC’s surprising mask announcement was not just a public-health milestone.”

It had not, of course. There were, as always, plenty of caveats to the CDC’s guidance. Masks should still be worn on public transportation and in high-risk settings such as doctor’s offices, hospitals, and nursing homes. The majority of Americans remain unvaccinated and should continue to mask up. Tens of thousands are testing positive for the coronavirus every day, and hundreds are still dying from it. Cases are surging in India and other parts of the world.

So, no, the pandemic isn’t over, but the significance of the CDC’s shift was unmistakable, and the nation’s senior political leaders made sure the public didn’t miss it. Inside the Oval Office, President Joe Biden and the Republican lawmakers with whom he was meeting took off their masks, Senator Shelley Moore Capito of West Virginia told reporters outside the White House. On the Senate floor, Senator Susan Collins of Maine—who earlier this week chastised Walensky over the CDC’s “conflicting” mask guidance—triumphantly waved hers in the air. “Free at last,” Senate Minority Leader Mitch McConnell, previously a fastidious mask-wearer, declared at the Capitol. Conservatives have mocked Biden, who has been fully vaccinated for months, for wearing a mask even when it clearly offered no discernible health benefit, including while walking alone to and from his helicopter. So when Biden spoke later in the afternoon in the White House Rose Garden, it was notable that he wasn’t wearing one. His remarks carried an air of celebration, if not quite finality. “Today,” he said, “is a great day for America in our long battle with the coronavirus.”

So, I do want to make this post mostly about what seems to be a turning-the-corner moment in our history of Covid-19.  I even have a friend taking his usual group of college students to Seville Spain this summer to take in the music and the opera.  He’s at the Student Health Center getting his vaccine passport because that’s what the Spanish Government requires for visitors. The private universities here are requiring their students to show up on campus in the fall with proof of vaccine this fall.  They intend to be open. The Louisiana University and Lousiana State University are still pandering to the backwoods goons in the Lousyana outback.  So, it’s still political just as Berman states.

We get the news today that all of the Democratic Congress is vaccinated which surprises no one. (Via CNN)

“No,” House Speaker Nancy Pelosi said when asked if the rule mandating masks unless a member is speaking on the House floor would be modified. She then asked, “Are they all vaccinated?”
The answer, among Democrats across both chambers, is a 100% vaccination rate. For Republicans, it’s a different story — with at least 44.8% of House members vaccinated and at least 92% of senators.
In a follow-up to a March House-wide survey and interviews with members, CNN has confirmed that 312 of the 431 members of the House — just over 72% of the 431-member body — have now received a Covid-19 vaccination. Of that, all 219 House Democrats have reported being vaccinated. Among the Republican conference, 95 of the 212 members — 44.8% — have said they are vaccinated.
One hundred and twelve Republican offices did not respond to multiple CNN inquires.

One House Republican, Rep. Tom Massie of Kentucky, said he is not vaccinated.

There’s one other thing that popped up on my radar yesterday.  Trump may be prepared to order Florida Governor Ron DeSantis to protect his ass from extradition to New York for prosecution.  It appears that may be evident.  So, the speculation is wtf is going on here, and can Florida actually do that?  From the South Florida Sun-Sentinel:  “If New York indicts Florida resident Donald Trump, could DeSantis save him from extradition?”

Trump bought and renovated Mar-a-Lago, in Palm Beach, long before he became president, and in 2019 he declared it was officially his residence after he decided he no longer wanted to call his native New York home. Born in Queens, Trump built an image of himself as a savvy Manhattan real estate mogul.

Since Jan. 20, he’s run his post-presidency from there, issuing statements and delivering occasional speeches to groups of guests in which he rails about the 2020 election. Trump continues to falsely claim the only reason President Joe Biden won is because of widespread voter fraud.

If Vance’s office secures an indictment of Trump while he’s at Mar-a-Lago, the question could land in DeSantis’ lap.

Florida statutes state that “When a demand shall be made upon the Governor of this state by the executive authority of another state for the surrender of a person so charged with crime, the Governor may call upon the Department of Legal Affairs or any prosecuting officer in this state to investigate or assist in investigating the demand, and to report to him or her the situation and circumstances of the person so demanded, and whether the person ought to be surrendered.”

To the extent DeSantis can do anything to help Trump — or appear to help Trump — it’s hard to envision DeSantis easily going along with New York and allowing extradition of the former president. Going along with extradition would infuriate Trump’s MAGA supporters — the very people DeSantis needs for his own re-election next year and any future presidential candidacy. Helping to fight it would undoubtedly earn praise from those same people.

You can read more on this from The Insider.  I am beginning to think Florida is a third rate banana republic right now.  It’s embarassing.

As the Manhattan district attorney’s criminal investigation into former President Donald Trump enters its final stages, officials in Florida are preparing for “thorny extradition issues that could arise” from a statute in the Sunshine State, Politico Playbook first reported on Thursday.

Two officials involved in the “contingency plans” told Politico that law-enforcement personnel in Palm Beach County were looking at what to do if Manhattan District Attorney Cyrus Vance Jr.’s investigation results in an indictment while Trump is at his Mar-a-Lago resort in Florida.

State law allows Republican Gov. Ron DeSantis — a staunch Trump ally — to step in and investigate whether a “person ought to be surrendered” if they’re indicted, Politico said.

Trump is residing at his golf club in Bedminster, New Jersey, for the next few months.

I wonder if they’re fortifying his Florida palace like a drug cartel lord.  Maybe he can get some hints from El Chapo.

If he stays there long enough, food poisoning will get him.

Okay, that’s enough for me.  I need to shower and shower, dress, and mentally prepare myself for post-pandemic wandering.  Let us know how your doing with the new reality.  Anyone else feeling hesitant like me?