← Thursday Reads
Monday Reads: Another Blow to the Big Lie →

Joe Biden has been POTUS for less than two months, and he has already accomplished so much. A few days ago, he announced that all adults in the U.S. could be vaccinated by the end of May. He has reversed many of Trump’s worst policies. And the massive $1.9 trillion Covid relief bill should pass the House in the next couple of days. Relief checks could start going out before the end of March.

USA Today: President Biden’s COVID-19 stimulus bill is on the brink of becoming law. Here’s where it stands.

The House is expected to pass the bill this week and as early as Tuesday evening. The House Rules Committee must first set the parameters for debate, and then the House must vote to approve the rules of debate.

Once the House approves the rules for debate, lawmakers will first debate the bill and then vote on final passage, which could happen late in the night Tuesday.

Biden said Monday that he would sign the legislation “as soon as I get it.”

The House passed the bill last month, but the Senate made changes that the House will have to approve.

The House first passed the bill at the end of February. The Senate took it up the next week, and it made changes to the bill’s provisions. A key Senate official, the parliamentarian, ruled that a provision increasing the federal minimum wage to $15 an hour could not stay in the final legislation, for example.

The Senate also lowered the unemployment benefit to $300 a week, down from $400 in the first version of the legislation the House passed, but extended it through the beginning of September, and made the first $10,200 of unemployment benefits non-taxable for households making less than $150,000.

The changes mean the House had to pass the bill again. If the House does not make any changes of its own, then the bill can go straight to Biden for his signature.

Speaker Nancy Pelosi (D-Calif.) and her leadership team, who spent the weekend working the phones with their members, are confident they will have the votes for one of Congress’s largest-ever economic relief bills. They’re set to once again contend with unified GOP opposition that will brand Biden’s rescue package as a Democratic offering ahead of next year’s midterms, when Republicans could recapture the majority by flipping just a handful of seats.

Pelosi shrugged off Republicans’ lack of support for the Covid aid plan,telling reporters that “I feel sad for them” and painting them as “oblivious to the support that this bill has among Republicans across the country.” 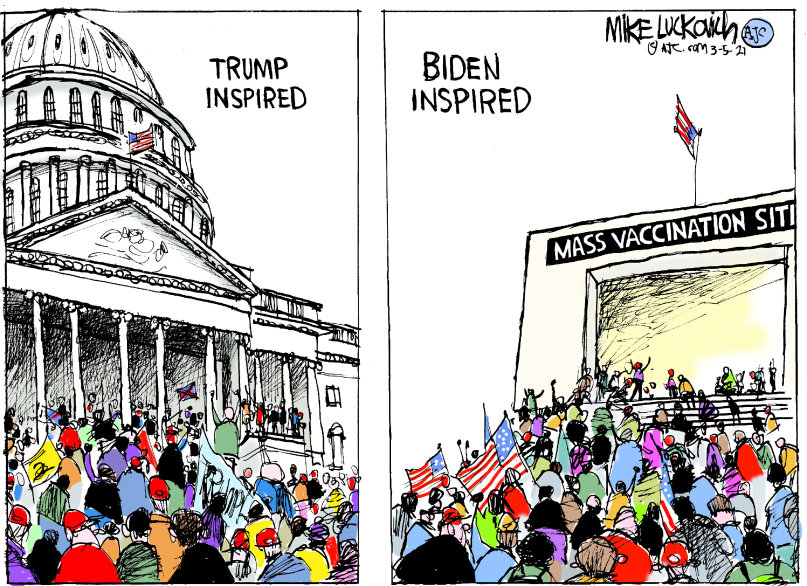 More details on what the bill will do:

A little-known element of President Biden’s massive stimulus relief package would pay billions of dollars to disadvantaged farmers — benefiting Black farmers in a way that some experts say no legislation has since the Civil Rights Act of 1964.

Of the $10.4 billion in the American Rescue Plan that will support agriculture, approximately half would go to disadvantaged farmers, according to estimates from the Farm Bureau, an industry organization. About a quarter of disadvantaged farmers are Black. The money would provide debt relief as well as grants, training, education and other forms of assistanceaimed at acquiring land.

While it’s a fraction of the $1.9 trillion bill that passed in the Senate on Saturday, advocates say it still represents a step toward righting a wrong after a century of mistreatment of Black farmers by the government and others. Some say it is a form of reparations for African Americans who have suffered a long history of racial oppression.

“This is the most significant piece of legislation with respect to the arc of Black land ownership in this country,” said Tracy Lloyd McCurty, executive director of the Black Belt Justice Center, which provides legal representation to Black farmers.

Black farmers in America have lost more than 12 million acres of farmland over the past century, mostly since the 1950s, a result of what agricultural experts and advocates for Black farmers say is a combination of systemic racism, biased government policy, and social and business practices that have denied African Americans equitable access to markets.

Read more at the WaPo.

The bill, which is expected to pass the House and be signed into law by President Joe Biden as soon as this week, includes more than $31.2 billion for tribal governments and Native communities. The money will go directly to helping American Indians, Alaska Natives and Native Hawaiians focus on economic recovery in their communities devastated by the COVID-19 pandemic…. 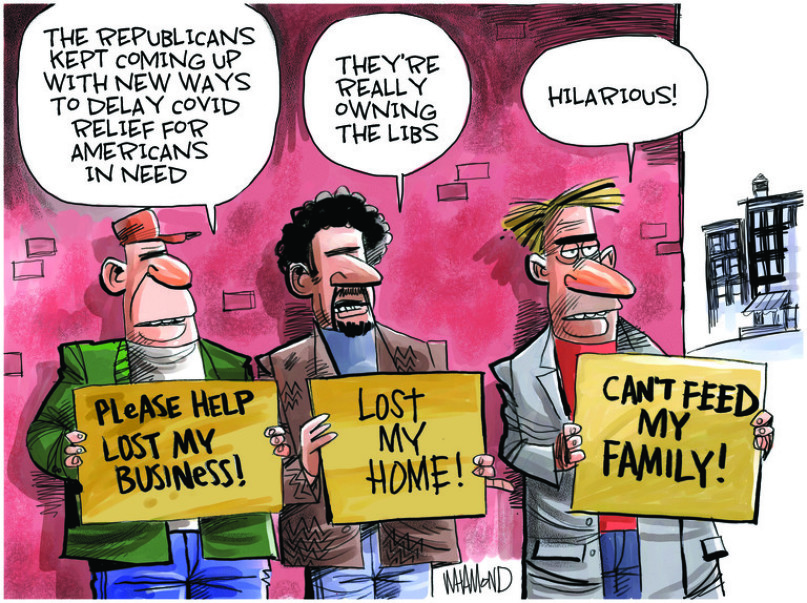 More than $1.2 billion will go to tribal and Native Hawaiian housing programs under the Department of Housing & Urban Development.

More than $1.1 billion will go to Native education programs.

More than $1 billion will go Native families, in the form of tribal child care programs and assistance to tribal Temporary Assistance for Needy Families grantees.

I’ve been worried that Democrats could lose their slim majority in the Senate in the 2022 midterms, but it turns out that quite a few Republican Senators are not going to run again.

With Sen. Roy Blunt (R-MO) announcing he won’t run for re-election in 2022 — joining four other GOP incumbents who have already announced they will be stepping down — Republican campaign consultants are worried about more Senate losses after losing control during Donald Trump’s last year in office.

In an interview with U.S. News and World Report, one Republican insider looked at some of the potential candidates expected to run for the open nominations and worried they might be unelectable.

In addition to Blunt’s seat in Missouri, Republican-held Senate seats in Ohio, Pennsylvania, North Carolina and Alabama are also opening up meaning the Republican Party will lose the built-in advantage of incumbency, meaning more work and money will have to flow into the races than normal….

The report goes on to note that the five GOP senators who have already announced they won’t seek re-election may see their ranks swell as Sen. Ron Johnson (R-WI) is hedging his bets and Sen. Chuck Grassley (R-IA) has refused to say what his plans are. 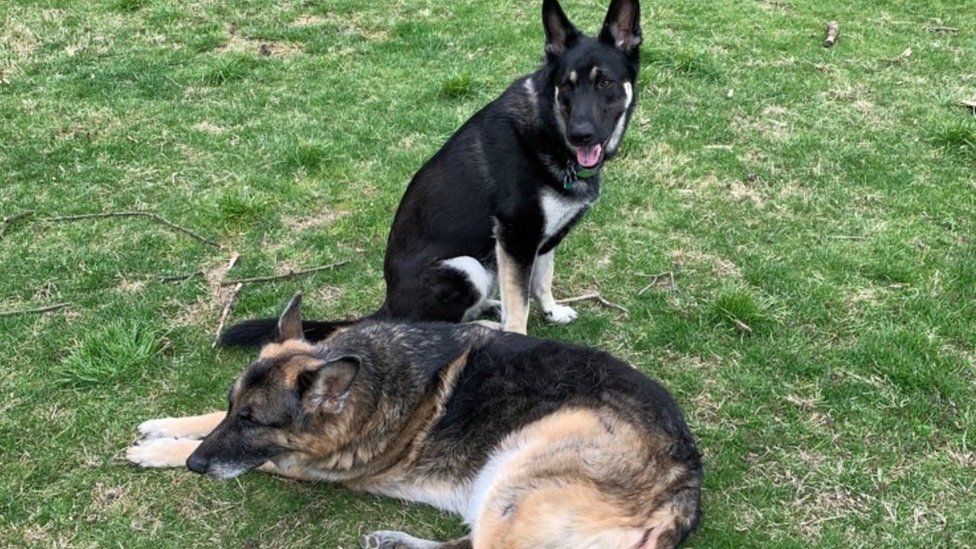 The White house dogs had to be sent back to Wilmington, after an incident involving the younger of the two, Major Biden.

CNN: Biden German Shepherd has aggressive incident and is sent back to Delaware.

Major, who was adopted by Biden in November 2018 from a Delaware animal shelter, had what one of the people described as a “biting incident” with a member of White House security. The exact condition of the victim is unknown, however, the episode was serious enough that the dogs were subsequently moved to Wilmington, Delaware, where they remain….

Major, who is 3 years old, is the younger of the two Biden dogs, and has been known to display agitated behavior on multiple occasions, including jumping, barking, and “charging” at staff and security, according to the people CNN spoke with about the dog’s demeanor at the White House. The older of Biden’s German Shepherds, Champ, is approximately 13 and has slowed down physically due to his advanced age.

I can see why living in the White House  could be stressful for a young dog because of all the activity and so many people coming and going. I hope the move won’t be permanent.

“I’ve been getting obsessed with getting our dogs settled because we have an old dog and we have a very young dog,” Jill Biden told Kelly Clarkson last month during an appearance on “The Kelly Clarkson Show.” “They have to take the elevator, they’re not used to that, and they have to go out on the South Lawn with lots of people watching them. So that’s what I’ve been obsessed with, getting everybody settled and calm.”

Biden also said the only place the dogs are not allowed is on the furniture, though she admitted to catching Major on the couch. “They run all over,” said Biden.

A person familiar with the dogs’ schedule confirms to CNN they are in Delaware, but noted they have been known to stay there with minders when the first lady is out of town. Biden departed Monday afternoon for a two-day trip to Washington and California to visit military bases.

Trump can paw 24 women and MAJOR BIDEN is the one who gets sent away? pic.twitter.com/OpEtckBmjS

Another small White House story from CNN: Bush and Clinton portraits are back on display in White House’s Grand Foyer.

The White House has rehung the official presidential portraits of former Presidents George W. Bush and Bill Clinton after they were removed last July during the Trump administration, an official tells CNN.

They are back on display in the Grand Foyer of the executive mansion, the official said.

The portraits were removed last July and were replaced by two portraits of Republican presidents who served more than a century ago.

White House tradition calls for portraits of the most recent American presidents to be given the most prominent placement, in the entrance of the executive mansion, visible to guests during official events. However, the Trump White House moved the Clinton and Bush portraits into the Old Family Dining Room, a small, rarely used room that is not seen by most visitors.

What  a petty little man Donald Trump is!

More stories to check out today:

Josh Rogin at Politico: In 2018, Diplomats Warned of Risky Coronavirus Experiments in a Wuhan Lab. No One Listened.

The New York Times: Many ‘Long Covid’ Patients Had No Symptoms From Their Initial Infection.

The Washington Post: Oath Keepers founder Stewart Rhodes was in direct contact with rioters before and during Capitol breach, U.S. alleges.

Tax Policy Center: Pandemic Bill Would Cut Taxes by An Average of $3,000, With Most Relief Going to Low- And Middle-Income Households.

Karen Attiah at The Washington Post: Opinion: How two Black women took down whatever fantasies remained about the British monarchy.

The Daily Beast: Inside Team Trump’s New Plot to Suppress the Vote Under Biden.

The Atlantic: We Already Got Rid of the Filibuster Once Before. The House used to have a filibuster too. And when legislators got rid of it, the result was a more democratic, productive institution.

Have a great Tuesday Sky Dancers!