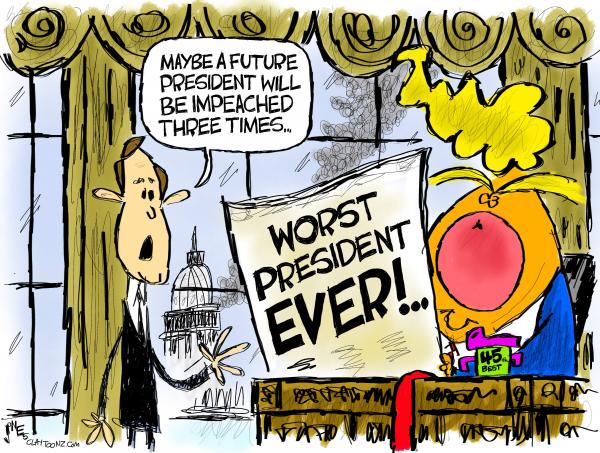 Yesterday Dakinikat posted one of those typical Politico “both-sidesy” “Democrats in disarray” articles about second Trump impeachment trial, which begins today. Supposedly Democrats are torn about whether they should go all out to convict trump or just give up because the whole thing is a “lost cause.” Why call witnesses and make a big scene when Republicans hold all the cards anyway? Of course Politico ignores the fact that a clear majority of Americans support conviction. CBS News:

As former President Trump’s second impeachment trial begins, a 56%-majority of Americans would like the Senate to vote to convict him, and the same percentage say he encouraged violence at the Capitol — views that are still somewhat linked to Americans’ presidential votes in 2020, reflecting ongoing partisan division.

To those in favor of conviction, this trial is described as holding Mr. Trump “accountable” and “defending democracy.” To those Americans (mostly, Republicans) opposed to it, the trial is “unnecessary” and a “distraction.”

As the impeachment curtain rises in the Senate today, with Trump being charged with “incitmdent of insurrection” for his role in the Jan. 6 attack on the U.S. Capitol, the D.C. press once again seems to think the impeachment of a Republican president poses political problems…for Democrats. It’s a strange prism through which to view the historic proceedings, as Trump becomes the first president in 240 years to be impeached twice — and in the span of just 13 months….

Overall, the press seems much more focused on the fact that Democrats likely won’t win a conviction, than they are on the swelling movement nationwide in favor of conviction. Republicans are clearly out of step with the public, but it’s Democrats who are portrayed as being boxed in and “muzzled.” 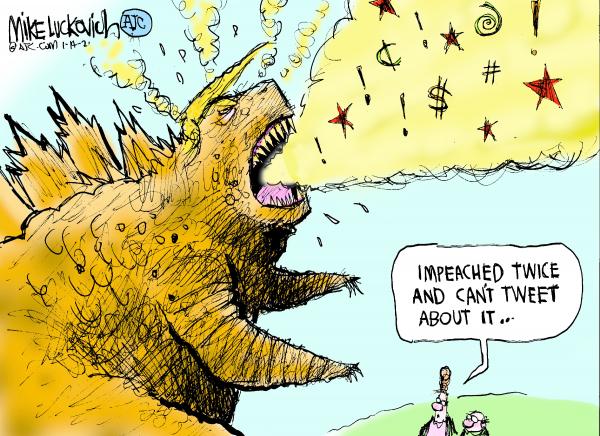 As for Republicans and the political consequences impeachment poses for them? Politico wasn’t interested, and made no suggestion that the GOP stands at the crossroads regarding Trump and the murderous mob he inspired to ransack the U.S. Capitol. The GOP, apparently, faces no impeachment fallout, only Democrats.

This is the type of coverage we saw during Trump’s impeachment last year, when news outlets flipped common sense on its head and became wed to idea that an unpopular Republican president being impeached represented a political problem for his opponents. The Washington Post insisted “hand-wringing” Democrats were “bracing” for scores of impeachment defections in the House. In the end, exactly two Democrats defected. Meanwhile, adopting Republican talking points, the New York Times reported that the first impeachment was “a political plus” for Trump, and “risky” for Democrats.

Talk about turning the tables. Back when Democrat Bill Clinton was impeached in 1999, the overriding political story was how badly would the historic proceeding damage Democrats? That, despite the fact that polling showed Americans overwhelmingly opposed the impeachment of Clinton, whose approval rating swelled into the 70’s while being persecuted by the GOP.  Yet last year when it was Democrats who were doing the impeaching, and when they had the support of the public, the press assumed they’d be the ones to pay a high price. Same is true again this year.

For Democrats, it’s heads you lose, tails you lose.

Read the whole thing at the link. As the trial plays out, we need to remember that there really is no liberal media. In fact, the “savvy” DC press always works hard to find a “both-sides” narrative, no matter how bad things get for Republicans.

As the GOP contends with its future and Trump’s role in it, Democrats are seizing on the deep divisions within the Republican ranks over its right wing and seeking to define the frontline of the party by its most extreme members. 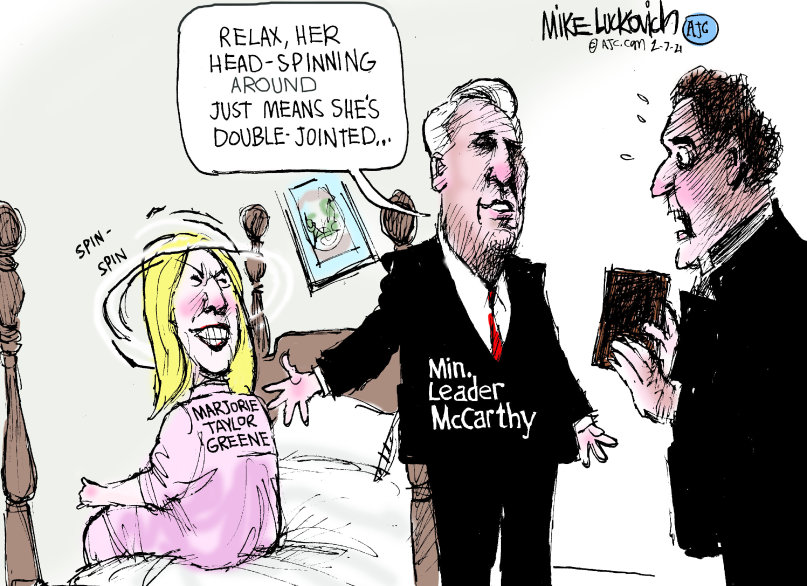 The opening shot by Democrats accuses the swing district Republicans of standing “with Q, not you.

“Washington Republicans have made their choice — they chose to cave to the murderous QAnon mob that has taken over their party,” said Rep. Sean Patrick Maloney, D-N.Y., the chair of the Democratic Congressional Campaign Committee. They are “refusing to hold those responsible for the attack on the Capitol accountable, offering nothing but empty words after years of hyping up lies and conspiracy theories.”

Schumer and McConnell have reached an agreement for how the trial will proceed. The Hill:

The timeline would allow the trial to wrap up as early as next week, if both sides agree not to call witnesses.

Under the deal, the Senate will debate and vote on Tuesday on whether the trial is constitutional. The effort to declare the trial unconstitutional will fall short after Rand Paul (R-Ky.) forced a vote on the issue late last month. Forty-four GOP senators supported his effort.

Opening arguments will start on Wednesday. Under the deal, the House impeachment managers and Trump’s team will have 16 hours over two days each to present their case to the Senate….

The deal also leaves the door open to calling witnesses. The House impeachment managers previously invited Trump to testify under oath, an offer his attorneys rejected. They haven’t yet said if they will try to get the Senate to call other witnesses.

Today the Senators will debate the constitutionality of trying a president who has left office. Trump’s lawyers claim that is unconstitutional, but the expert they rely on for their arguments says they are misinterpreting his scholarship. 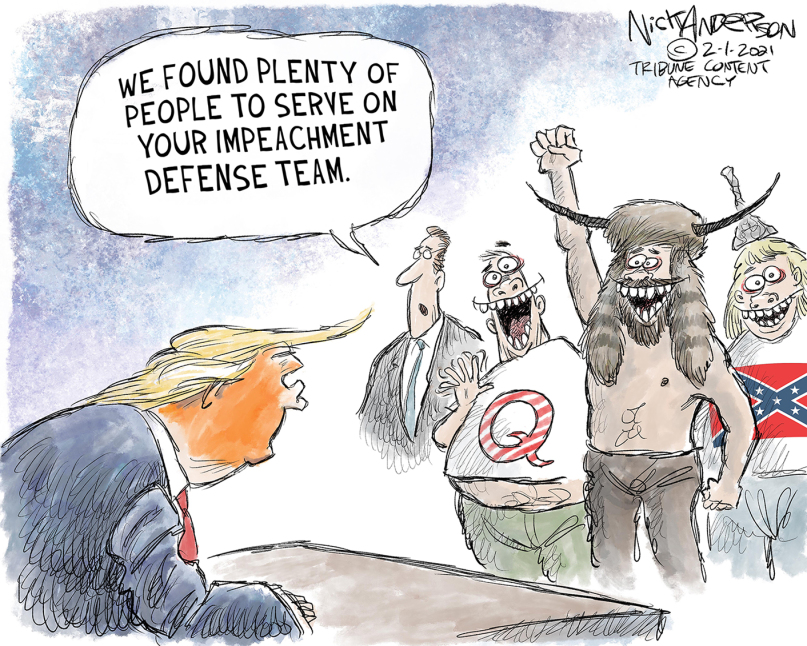 At NPR, Nina Totenberg interviews that expert: ‘I Said The Opposite’: Criticism Of Trump’s Impeachment Defense Intensifies.

A constitutional law professor whose work is cited extensively by former President Trump’s lawyers in their impeachment defense brief says his work has been seriously misrepresented.

In a 78-page brief filed in the U.S. Senate Monday, Trump’s lawyers rely heavily on the work of Michigan State University Professor Brian Kalt, author of the seminal article about impeachment of a former president. His work is cited 15 times in the Trump brief, often for the proposition that the Senate does not have the authority under the constitution to try an impeached ex-president.

The problem is that Kalt’s 2001 book-length law review article concluded that, on balance, the historical evidence is against Trump’s legal argument.

“The worst part is the three places where they said I said something when, in fact, I said the opposite,” Kalt said in an interview with NPR.

Trump’s lawyers argue that the Senate lacks jurisdiction because the president is already out of office, making an impeachment trial pointless. Kalt argues that impeachment is about more than removal; it’s about accountability and deterrence. “The framers worried about people abusing their power to keep themselves in office,” he adds. “The point is the timing of the conduct, not the timing of the legal proceeding.”

Read the rest at NPR.

David Corn at Mother Jones: Why the Second Impeachment of Donald Trump Is More Important Than the First.

[D]espite the the deja-vu-ness of this been-there/done-that impeachment and the absence of a possible political death sentence, the second Trump impeachment is far more important than the first, for it ultimately is about securing and protecting the defining ideal of the United States: that this nation is a democracy that honors principle not power…. 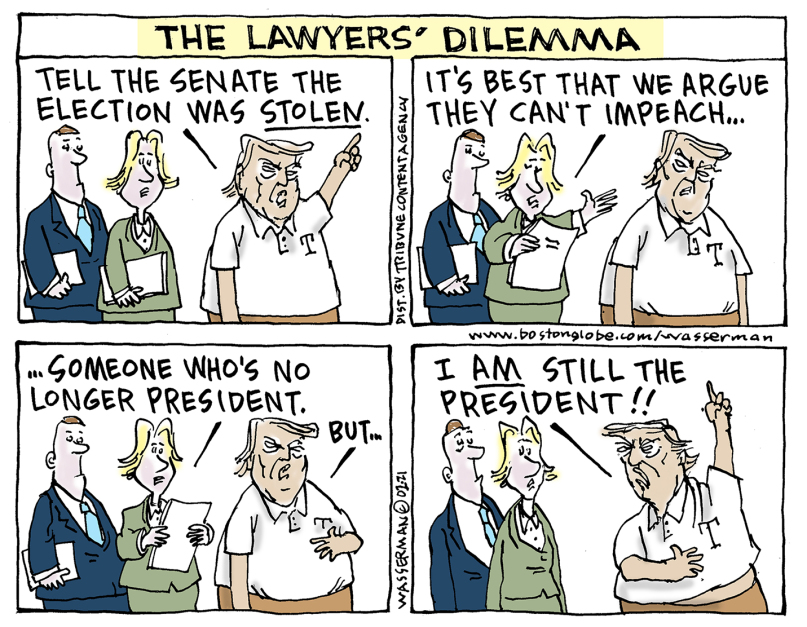 The core issue is a president jeopardizing American democracy. For the first time since the republic was born, the United States did not experience a peaceful transfer of power following a presidential election. (Yes, there’s an asterisk for the 1860 election of Abraham Lincoln that led six months later to the Civil War.) Trump spent weeks prior to the election plotting how to subvert it should he lose, and then he put his scheme in motion, pushing the big lie that massive fraud had occurred and a nefarious cabal had stolen his victory. He falsely declared victory before all the votes were counted. He and his allies refused to accept legitimate and certified results, filing frivolous lawsuits that were routinely tossed out and spreading baseless conspiracy theories. They lied—over and over—about vote tallies and supposed irregularities that did not exist. It was a psyop campaign, information warfare—similar to the covert attack waged against the 2016 election by Vladimir Putin. And evoking his infamous Ukraine phone conversation, Trump called Georgia state officials and pressured them to “find” him just enough votes to secure a victory in that state. Coercing local officials to falsify election results can be a crime.

This all happened before the seditious and murderous attack on the US Capitol on January 6. For months, Trump had waged war against the election and the American political system, seeking to discredit it so he could retain power, misleading millions of America, and exploiting paranoia, fear, and political division. His impeachable acts did not begin on the that dreadful day. “The full story is a crime story, a long crime story,” one of the House impeachment managers tells me. The attack on Congress—which aimed to overturn the election results—was the product of a lengthy stretch of disinformation and incitement.

More points of view on the trial: 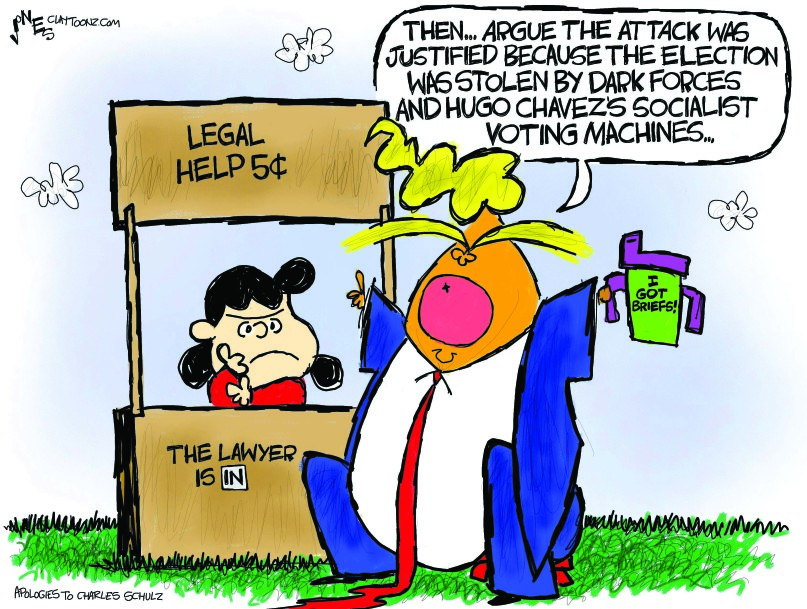 Richard H. Pildes at The Atlantic: January 6 Was Just One Day in a Sustained Campaign.

Stephen Collinson at CNN: Trump’s trial set to rock Washington and echo through the ages.

Peter D. Keisler and Richard D. Bernstein: at The Atlantic: Freedom of Speech Doesn’t Mean What Trump’s Lawyers Want It to Mean.

Steve Coll at The New Yorker: Trump’s Impeachment Trial Offers a Chance to Seize the Initiative on the Future of Free Speech.

Michael Conway: How Republicans’ defense of Trump over his impeachment trial hurts him in the long run.

Vanity Fair: Trump’s Impeachment Lawyers: He was Heartbroken by Capitol Violence, How Dare You Suggest Otherwise.

Will you be watching today’s arguments? If so, let us know what you think.