← Wednesday Reads: Bear with me.
Monday Morning Reads: Government by the Superstition instead of Acts of Faith →

Tuesday Reads: Is It Fascism Yet?

Things are getting real now. Trump sent unidentified federal troops into Portland, Oregon to illegally abduct peaceful protesters, force them into unmarked cars, and transport them to secret locations. Now he is threatening to send his goons into more cities and states led by Democratic mayors and governors. This is a giant step toward fascism.

The month after Donald Trump’s inauguration, the Yale historian Timothy Snyder published the best-selling book “On Tyranny: Twenty Lessons From the Twentieth Century.” It was part of a small flood of titles meant to help Americans find their bearings as the new president laid siege to liberal democracy.

One of Snyder’s lessons was, “Be wary of paramilitaries.” He wrote, “When the pro-leader paramilitary and the official police and military intermingle, the end has come.” In 2017, the idea of unidentified agents in camouflage snatching leftists off the streets without warrants might have seemed like a febrile Resistance fantasy. Now it’s happening.

According to a lawsuit filed by Oregon’s attorney general, Ellen Rosenblum, on Friday, federal agents “have been using unmarked vehicles to drive around downtown Portland, detain protesters, and place them into the officers’ unmarked vehicles” since at least last Tuesday. The protesters are neither arrested nor told why they’re being held.

There’s no way to know the affiliation of all the agents — they’ve been wearing military fatigues with patches that just say “Police” — but The Times reported that some of them are part of a specialized Border Patrol group “that normally is tasked with investigating drug smuggling organizations.”

Why Trump chose the Border Control to act as his personal secret police: 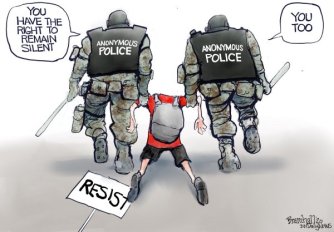 It is true that C.B.P. is not an extragovernmental militia, and so might not fit precisely into Snyder’s “On Tyranny” schema. But when I spoke to Snyder on Monday, he suggested the distinction isn’t that significant. “The state is allowed to use force, but the state is allowed to use force according to rules,” he said. These agents, operating outside their normal roles, are by all appearances behaving lawlessly.

Snyder pointed out that the history of autocracy offers several examples of border agents being used against regime enemies.

“This is a classic way that violence happens in authoritarian regimes, whether it’s Franco’s Spain or whether it’s the Russian Empire,” said Snyder. “The people who are getting used to committing violence on the border are then brought in to commit violence against people in the interior.”

When Mark Pettibone was detained by armed camouflage-clad officers and forced into an unmarked van last week, he says he had no idea what was happening to him.

Pettibone, 29, is one of several protesters in Portland, Ore., who say they’ve have been arrested by militarized federal agents in recent weeks.

The officers were deployed by the Department of Homeland Security to help the Federal Protection Service protect federal buildings and statues from protesters who have been demonstrating against police brutality.

The so-called “rapid deployment teams” have been seen sporting military-style fatigues with the word “Police” on them, but no badge numbers or identifying information. They include members of Immigration and Customs Enforcement, the Transportation Security Administration and the Coast Guard, according to the New York Times.

Portland’s mayor has called their presence unconstitutional and demanded the federal government remove them from his city.

But DHS and U.S. President Donald Trump have both defended the move, and refused to back down. Trump suggested Monday he may soon deploy more officers to confront protesters in New York, Chicago, Philadelphia, Detroit, Baltimore and Oakland, noting the cities’ mayors are “liberal Democrats.”

Read and/or listen to the interview with Pettibone at the link.

Yesterday the Chicago Tribune reported that Trump’s storm troopers will be sent to Chicago next: Trump expected to send new federal force to Chicago this week to battle violence, but plan’s full scope is a question mark.

Chicago may see an influx of federal agents as soon as this week as President Donald Trump readies to make good on repeated pledges he would try to tamp down violence here, a move that would come amid growing controversy nationally about federal force being used in American cities.

U.S. Department of Homeland Security, for example, is crafting plans to deploy about 150 federal agents to the city this week, the Chicago Tribune has learned.

The Homeland Security Investigations, or HSI, agents are set to assist other federal law enforcement and Chicago police in crime-fighting efforts, according to sources familiar with the matter, though a specific plan on what the agents will be doing — and what their limits would be — had not been made public.

DHS in Washington did not immediately respond to requests for comment, while the Department of Justice indicated an announcement would be forthcoming on an expansion of what has been dubbed Operation Legend, which saw several federal law enforcement agencies assist local police in Kansas City, Missouri, including the FBI and U.S. Marshals Service.

One Immigration and Customs Enforcement official in Chicago, who asked not to be named because they were not authorized to speak on the matter, confirmed the deployment was expected to take place. The official noted that the HSI agents, who are part of ICE, would not be involved in immigration or deportation matters.

Federal agents being used to confront street protesters in Portland, Oregon, has raised alarm in many circles. Chicago, too, has dealt with protests that have led to injuries in recent days.

President Trump plans to deploy federal law enforcement to Chicago and threatened on Monday to send agents to other major cities — all controlled by Democrats.

Governors and other officials reacted angrily to the president’s move, calling it an election-year ploy as they squared off over crime, civil liberties and local control that has spread from Portland, Ore., across the country.

With camouflage-clad agents already sweeping through the streets of Portland, more units were poised to head to Chicago, and Mr. Trump suggested that he would follow suit in New York, Philadelphia, Detroit and other urban centers. Governors and other officials compared his actions to authoritarianism and vowed to pursue legislation or lawsuits to stop him….

The president portrayed the nation’s cities as out of control. “Look at what’s going on — all run by Democrats, all run by very liberal Democrats. All run, really, by radical left,” Mr. Trump said. He added: “If Biden got in, that would be true for the country. The whole country would go to hell. And we’re not going to let it go to hell.”

Democrats said the president was the one out of control. Senator Jeff Merkley of Oregon said he would introduce legislation to limit the role of federal agents in cities like Portland. “This isn’t just an Oregon crisis,” he said. “It’s an American crisis. We need to stop Trump before this spreads.”

He added, “We won’t let these authoritarian tactics stand.”

Slate Magazine: Trump’s Legal Justification for the Abduction of Portland Protesters Is Absurd.

Last week, people wearing combat fatigues were seen pulling apparently peaceful protesters off the streets of Portland, Oregon, and hustling them into unmarked vehicles. Their uniforms carried no identifying insignia, but they were clearly military uniforms. Based on the video evidence so far, the people being arrested were not engaged in crime. So we are faced with two questions. First, are these people military personnel, or are they police officers dressed up like soldiers? Second, do these people have the authority to sweep people off the street like this?

According to the Department of Homeland Security, the answer to the first question is that the force patrolling the streets of Portland consists of the Federal Protective Service, whose job it is to protect federal property. Personnel from other federal agencies—principally the Border Patrol—have also reportedly been deputized to assist in that mission. So these uniformed personnel are a militarized police force, which is always a dangerous thing. The answer to the second question is that, under the Fourth Amendment, this force does not have the authority to detain people like this. But government lawyers will rely on expansive theories of police power that cripple Fourth Amendment protection against unlawful seizures. This would not be the first time the federal government has tried this, though it appears to be one of the first targeting people exercising their First Amendment right to protest.

The Federal Protective Service has the authority to make arrests “if the officer or agent has reasonable grounds to believe that the person to be arrested has committed or is committing a felony.” If that doesn’t sound right to you, it shouldn’t. People can’t be arrested unless the arresting officer has probable cause—not merely reasonable grounds—to believe a crime has been committed or is underway. That’s required by the Fourth Amendment to the Constitution, which presumptively prohibits seizures without probable cause.

Read the rest of the legal argument at Slate.

CNN: Trump’s team is increasingly adopting the narratives of autocracy.

Will Bunch at The Philadelphia Inquirer: Trump’s made-for-TV fascism in Portland won’t get him reelected. It may get someone killed.

CNN: ‘Things could get very ugly’: Experts fear post-election crisis as Trump sets the stage to dispute the results in November.

The Guardian: Trump consults Bush torture lawyer on how to skirt law and rule by decree.

18 Comments on “Tuesday Reads: Is It Fascism Yet?”