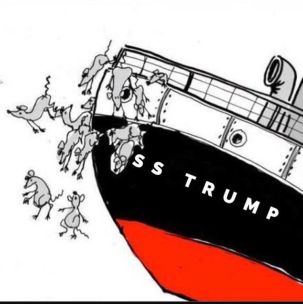 Yesterday was quite a day. In the afternoon, it became abundantly clear that the rats are jumping off Trump’s sinking ship, competing to see who can be the first to leak dirt on the Dotard and his gang of miscreants. Here’s summary from CBS News: New revelations shed light on Trump-Ukraine call — live updates.

A series of rapid-fire developments brought the House impeachment inquiry into clearer focus Monday afternoon, with Democrats issuing new demands for evidence and new revelations about the circumstances of the president’s call with Ukraine coming to light.

Just before 4 p.m., three House committees announced they had subpoenaed Rudy Giuliani, the president’s personal lawyer, for documents related to his work on behalf of President Trump to persuade Ukraine to open an investigation into former Vice President Joe Biden. The committees also requested material about Giuliani’s work to secure Ukraine’s cooperation into a Justice Department review of the origins of Robert Mueller’s Russia probe.

Shortly after the subpoena was announced, The Wall Street Journal reported Secretary of State Mike Pompeo was on the July 25 call between the president and the Ukrainian leader. CBS News has confirmed Pompeo was on the call.

The New York Times reported Mr. Trump had called the prime minister of Australia to request assistance in the Justice Department review. The call came at the behest of Attorney General William Barr.

A Justice Department official then told CBS News that Barr had asked Mr. Trump to reach out to a number of foreign officials to request their assistance in his review, which is being led by the U.S. attorney in Connecticut. A source familiar with the matter said Barr traveled to Italy as part of his effort, and The Washington Post reported he has also reached out to intelligence officials in the United Kingdom.

In the call with Ukrainian President Volodymyr Zelensky on July 25, Mr. Trump repeatedly asked him to work with Barr to pursue a fringe conspiracy theory about the origins of the 2016 U.S. counterintelligence investigation that would became the Mueller probe.

But it wasn’t just Australia. At about 8:30 last night, The Washington Post reported: Barr personally asked foreign officials to aid inquiry into CIA, FBI activities in 2016.

Attorney General William P. Barr has held private meetings overseas with foreign intelligence officials seeking their help in a Justice Department inquiry that President Trump hopes will discredit U.S. intelligence agencies’ examination of possible connections between Russia and members of the Trump campaign during the 2016 election, according to people familiar with the matter….

The direct involvement of the nation’s top law enforcement official shows the priority Barr places on the investigation being conducted by John Durham, the U.S. attorney in Connecticut, who has been assigned the sensitive task of reviewing U.S. intelligence work surrounding the 2016 election and its aftermath.

The attorney general’s active role also underscores the degree to which a nearly three-year-old election still consumes significant resources and attention inside the federal government. Current and former intelligence and law enforcement officials expressed frustration and alarm Monday that the head of the Justice Department was taking such a direct role in reexamining what they view as conspiracy theories and baseless allegations of misconduct.

So far, we’ve learned that Barr and Trump sought help to discredit their own intelligence community from Australia, the UK, and Italy. What other countries have been approached? I imagine we’ll learn more soon. Keep in mind that this entire criminal enterprise is designed to help Vladimir Putin by discrediting the Mueller investigation and removing sanctions on Russia.

It’s now abundantly clear that President Trump is actively deploying the resources of the U.S. government explicitly to bolster his chances of reelection in 2020. The recent whistleblower complaint revealed one part of the two-pronged strategy: leverage U.S. military aid to Ukraine to compel the Ukrainian government to dredge up old allegations on political rival Joe Biden. The second aspect of the Trump vindication-through-vilification reelection strategy has led Trump and his allies to investigate the investigation by Robert Mueller into Russian interference in the 2016 election to try to muddy the water sufficiently that Trump looks clean by comparison—or by confusion. That effort is also being propelled by the power vested in the highest offices of the U.S. government, including, of course, the presidency. Yet another example, the New York Times reports, is a recent phone call made by President Trump to Australian Prime Minister Scott Morrison asking the foreign leader to assist Attorney General Bill Barr in the investigation of the Mueller investigation.

Will Trump get away with it? He is opening inciting violence against the whistleblower, Adam Schiff, and anyone else who tries to stand up to him. We don’t know yet what will happen, but history shows that politicians who mess with the CIA/FBI are playing with fire. I expect more drip drip drip revelations in the coming days.

Yesterday David Remnick at The New Yorker highlighted Trump’s unhinged attacks on anyone who tries to stand up to him:

Shortly after eight this morning, the President of the United States, making maximal use of his “executive time,” wielded his smartphone to issue a legal threat against the chairman of the House Intelligence Committee. It is worth reading the missive from @realDonaldTrump in full:

“Rep. Adam Schiff illegally made up a FAKE & terrible statement, pretended it to be mine as the most important part of my call to the Ukrainian President, and read it aloud to Congress and the American people. It bore NO relationship to what I said on the call. Arrest for Treason?”

Were the collective nerve endings of the electorate not so frayed and numbed by now, we might be even more alive to the ugliness of this message from the White House. One of the consequences of the Trump Presidency is the way  that it constantly diminishes our expectations of anything other than hideous rhetoric and action. But there are those who are intensely aware of the potential consequences of such a threat. Sources close to Schiff told The New Yorker today that Democrats in Congress are deeply worried about the President using Twitter to incite violence and to direct it at specific members.

The threat to Schiff via Twitter came just a few days after the President, speaking at the United States Mission to the United Nations, said that whoever provided information to the whistle-blower about his July 25th telephone call with the President of Ukraine was “close to a spy.” Trump went on to wax nostalgic about how spies were dealt with “in the old days”—with the death penalty, in other words. “As soon as I heard that, I thought, He has the soul and the mind of an authoritarian,” Nicholas Burns, a former high-ranking diplomat who has served in Republican and Democratic Administrations, told me. “What other President in American history would say that?”

As Remnick points out, Trump’s violent threats against his “enemies” are nothing new and they are likely to get worse as the impeachment investigation continues. 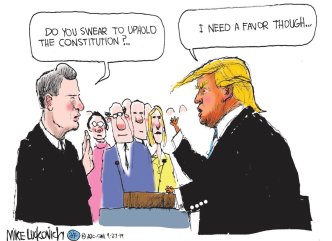 This could be an ominous sign for Trump. The Washington Post: McConnell says if House impeaches Trump, Senate rules would force him to start a trial.

Should the impeachment spotlight turn to the Senate in the coming weeks, McConnell — who faces a reelection fight next year — will confront the dual pressures of minimizing political pain for his Senate majority and ensuring legitimacy and a sense of fairness for what would be only the third impeachment trial of a president in American history.

On Monday, McConnell said he was bound by existing Senate rules governing the impeachment and conviction process, amid speculation that he could simply ignore the specter of putting Trump on trial. Senior Republican aides had worked to try to tamp down that notion over the weekend.

The Kentucky Republican — who hasn’t hesitated in the past to revise Senate rules to benefit Republicans, specifically the president’s judicial nominees — stressed he would not change them to aid Trump. That move would require the support of 67 senators, almost certainly an insurmountable threshold.

I’m waiting with bated breath to see what breaks today in this massive scandal that has now engulfed Trump, his personal attorney, his White House lawyers, his Secretary of State, and his Attorney General. 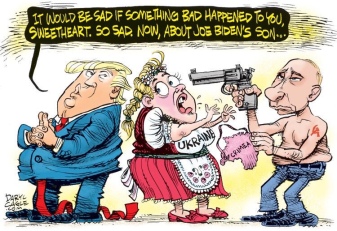 An unnamed civil servant is alleging serious interference in government business. If the allegations are true, they could be a game-changer. They might set in motion the release of lots of other secret documents showing that President Trump has abused his authority for his personal benefit.

Wait, you thought I meantthe whistleblower from the intelligence community?

Nope. I’m talking about a completely different whistleblower, whose claims have gotten significantly less attention but could prove no less consequential. This whistleblower alleges a whole different category of impropriety: that someone has been secretly meddling with the Internal Revenue Service’s audit of the president.

In defiance of a half-century norm, Trump has kept his tax returns secret.

We don’t know exactly what he might be hiding. His bizarre behavior, though, suggests it’s really bad.

The New York Times Magazine: This Is the Moment Rachel Maddow Has Been Waiting For.

David Enrich at The New York Times: Me and My Whistle-Blower.

Politico: Trump may have lied to Mueller, House Democrats say

The Los Angeles Times: Trump’s ‘favor’ and delay of U.S. aid weakened Ukraine in the fight against Russia.