Lazy Saturday Reads: Trump Is Getting Boring. That Makes Him Even More Dangerous. 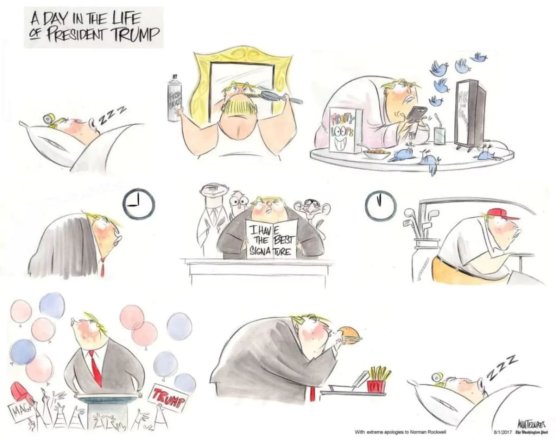 Maybe it just the holiday blues, but I’m bored with Trump. I’m bored with with the advance of authoritarianism and outright fascism in the United States of America. It’s ugly as all get out and I’m sick and tired of it. After one year of this shit, I just want to resign from the human race. I guess that’s how it happens. The fascists wear you down until you just want to escape into books or music or art or anything that isn’t about Trump. Is this something like what Hanna Arendt meant by “the banality of evil?”

Of course I know I can’t escape Trumpism. I will continue to wake up every day fearful of what he might have done overnight, of what idiotic tweets he may have already sent out, of what evil deeds he may be plotting. I can’t let myself sink into despair.

Michael Gruenwald writes about Trump’s first year at Politico: Donald Trump Is a Consequential President. Just Not in the Ways You Think.

On January 20, 2017, as President Donald Trump began his inaugural address, a cold rain began to fall.

A few hours later, Trump claimed the rain had not begun to fall.

“The crowd was unbelievable today,” Trump crowed to revelers at the Liberty Inaugural Ball. “I looked at the rain, which just never came. You know, we finished the speech, went inside, and it poured!” 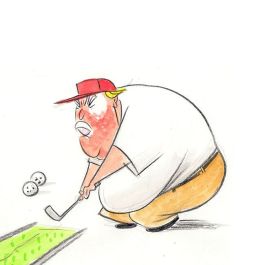 It wasn’t a consequential falsehood. And neither was Trump’s claim that his inaugural crowd was the largest ever, a whopper he sent his press secretary out to defend the next day in the face of overwhelming photographic evidence. Neither the meteorological conditions at his swearing-in nor the size of the audience that witnessed his swearing-in altered the remarkable fact that he had just been sworn in as the president of the United States. So why would the holder of the most powerful office on Earth insist on juicing his narrative with petty embellishments, especially when his propaganda could be so easily and objectively disproved?

In retrospect, it’s obvious that Trump was starting to construct an alternative reality for his supporters, establishing himself (rather than the “enemies of the people” in the “FAKE NEWS” media) as the only reliable source of truth. Really, it was pretty obvious at the time. Trump aide Kellyanne Conway was already spinning that the administration was helpfully supplying the media with “alternative facts.”

I wrote back in the Week One edition of the Did-It-Matter-Meter that the crowd-size episode “laid down a marker about the irrelevance of facts to this White House,” and “staked out new territory in Orwellian up-is-down-ism, forcing Americans to choose whether to believe Trump or their lying eyes.” A year later, Trump is still spinning an alternative reality in which he’s achieved more than any other first-year president, he doesn’t watch much TV, the Russia investigation is nothing but a partisan witch hunt, the successive defeats of both candidates he endorsed in a Senate race in Alabama actually demonstrated his immense popularity, the coal industry is coming back, Americans are finally free to say “Merry Christmas” without fear of persecution, and legislation that would slash taxes for the rich in general and real estate developers in particular would somehow hurt his bottom line. No matter how often the fact-checkers fact-check him, he sticks with his alternative facts.

And so it has continued. Is Trump doing this to our country as part of a deliberate plan or is it just who he is? I can’t help wondering when I hear and read his garbled words in interviews like the one with the New York Times a couple of days ago. I think he’s just behaving according to his fascist instincts, but maybe it doesn’t matter; because there are people around him who seem to be just as ignorant and just as evil, and for now they are making progress. Check out this video of a Republican lawmaker, Rep. Robert Pittenger of North Carolina.

Where do the Republicans find these people and what kinds of people vote for them?

Back to the Politico article:

The most consequential aspect of President Trump—like the most consequential aspect of Candidate Trump—has been his relentless shattering of norms: norms of honesty, decency, diversity, strategy, diplomacy and democracy, norms of what presidents are supposed to say and do when the world is and isn’t watching. As I keep arguing in these periodic Trump reviews, it’s a mistake to describe his all-caps rage-tweeting or his endorsement of an accused child molester or his threats to wipe out “Little Rocket Man” as unpresidential, because he’s the president. He’s by definition presidential. The norms he’s shattered are by definition no longer norms. His erratic behavior isn’t normal, but it’s inevitably becoming normalized, a predictably unpredictable feature of our political landscape. It’s how we live now, checking our phones in the morning to get a read on the president’s mood. The American economy is still strong, and he hasn’t started any new wars, so pundits have focused a lot of their hand-wringing on the effect his norm-shattering will have on future leaders, who will be able to cite the Trump precedent if they want to hide their tax returns or use their office to promote their businesses or fire FBI directors who investigate them. But Trump still has three years left in his term. And the norms he’s shattered can’t constrain his behavior now that he’s shattered them. 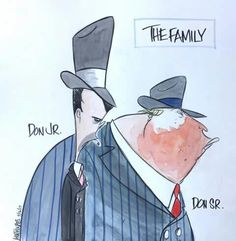 If the big story of the Trump era is Trump and his unconventional approach to the presidency, two related substories will determine how the big story ends. The first is the intense personal and institutional pushback to Trump—from the otherwise fractious Democratic Party; the independent media; independent judges; special counsel Robert Mueller; advocates for immigrants, voting rights, the poor, the disabled, the environment and other #Resistance causes; and ordinary citizens, who have made Trump the least popular first-year president in the modern era.

The second substory is the sometimes grudging but consistent support—the critics call it complicity—that Trump has enjoyed from the Republicans who control Congress. The uneasy marriage of convenience between Trump and the congressional GOP explains his two big legislative victories, the confirmation of Supreme Court Justice Neil Gorsuch and last month’s $1.5 trillion tax cut. It also explains Capitol Hill’s see-no-evil approach to investigating activities that would have triggered endless outrage and probable impeachment hearings in a Hillary Clinton administration.

Dakinikat covered the NYT interview thoroughly yesterday, but I want to share a couple of reactions that came out yesterday.

President Donald Trump says so many things that are untrue as to complicate attempts at explaining them. Did he know better? Was he uninformed? Should he be taken literally?

What made the president’s year-end New York Times interview notable was repetition of a particular brand of untruth. Even as his administration struggles with historic unpopularity and extraordinary dysfunction, Trump ascribes to himself qualities that surpass all predecessors – even reigning Republican icon Ronald Reagan.

Call them “delusions of omnipotence.”

Over and over during the 30-minute session, Trump cast his performance in terms so grandiose and extreme as to be self-evidently false. Taken together, his comments signaled an inability to grasp conditions in the country, the limitations of his own capacities and the nature of the office he holds. 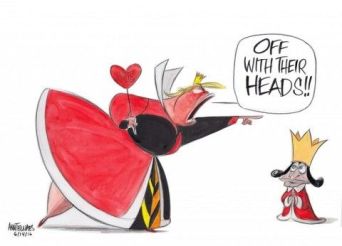 Harwood gives a number of specific examples. Here are the first three:

– He attributed his 2016 victory over Hillary Clinton to skill in overcoming the pro-Democratic tilt of the Electoral College. There is no such tilt. The electoral college system provides a path to victory for the party losing the popular vote. Republicans lost six of the last seven popular votes in presidential contests, but they won the Electoral College in two of those six instances.

– He insisted his Democratic adversaries on Capitol Hill have absolved him of “collusion” with Russia on election interference. They have not. They have said they haven’t yet seen conclusive evidence from Congressional and Justice Department investigations that remain ongoing.

The president of the United States is not well. That is an uncomfortable thing to say, but it is an even worse thing to ignore.

Consider the interview Trump gave to the New York Times on Thursday. It begins with a string of falsehoods that make it difficult to tell whether the leader of the free world is lying or delusional. Remember, these are President Donald Trump’s words, after being told a recording device is on:

It almost goes without saying that literally zero congressional Democrats have said that there was no collusion between Russia and the Trump campaign during the 2016 election. Zero….

Nor is Trump’s base strengthening, or even holding steady. In a detailed analysis of Trump’s poll numbers, FiveThirtyEight’s Harry Enten concluded that the president is losing the most ground in the reddest states:

The fact that Trump has lost the greatest number of supporters in red states is perhaps the clearest indication yet that he is losing ground among some form of his base, if you think of his base as those who voted for him in November.

CNN took a different angle on the same question and also found slippage among Trump’s base. It looked at the change in Trump’s approval ratings from February to November among the demographic groups that formed the core of Trump’s electoral coalition — in every group, there’d been substantial declines. Trump’s numbers have fallen by 8 points among Republicans, by 9 points among voters over 50, by 10 points among whites with no college, by 17 points among white evangelicals. “It has become increasingly clear that even his base is not immune to the downward pressure,” CNN concluded.

Head over to Vox to read the rest.

It appears that we have a “president” who is both evil and cognitively dysfunctional. For now, it’s up to the Republicans in Congress to hold him in check and they’re not doing it. There’s a good chance the Democrats will be able to take over Congress in 2018, but can we last another year with Trump in charge? I hope we get through it, that’s all I can say.

What stories are you following?

50 Comments on “Lazy Saturday Reads: Trump Is Getting Boring. That Makes Him Even More Dangerous.”