The day we’ve all be waiting for since June 2008 has finally arrived! Hillary Clinton will officially begin her campaign for the presidency this morning on New York City’s Roosevelt Island. Let’s watch her speech together!

I signed up to get an email when the live feed begins on Hillary’s website. There doesn’t seems to be any other way to get the link–if you find one, please let us know. I assume CNN and other media outlets will be covering the event as well.

I’ll put up a second live blog if we need it.

Hillary’s speech will reportedly focus on income inequality and how she would deal with the problem as president. From the AP, via ABC News: Clinton Calling for New Era of Shared Economic Prosperity.

At an outdoor rally Saturday on New York City’s Roosevelt Island, Clinton will portray herself as a fierce advocate for those left behind in the post-recession economy, detailing a lifetime of work on behalf of struggling families. She says her mother’s difficult childhood inspired what she considers a calling….

“Her story, her life, is she is someone who has always been advocating and fighting for someone else,” said Jennifer Palmieri, the Clinton campaign’s communications director….

Clinton is not expected to roll out specific policy proposals in her address. Aides say that will come in the following weeks on issues that include college affordability, jobs and the economy. She plans to give a policy address almost every week during the summer and fall, Palmieri said.

The rest of the article is criticism of Hillary’s “divisiveness” and her decision not to specifically address the Keystone Pipeline and the TPP. Sigh . . .

Clinton does talk about the economy a lot on the campaign trail, but so far only in broad strokes. She says she wants everyone to have the same chances she had — and that, as she said visiting a brewery in May, “here in Washington we know that unfortunately the deck is still being stacked for those at the top.”

She says that her job is to take that deck and “reshuffle the cards” but what does that mean?

“Paramount is how we’re going to have an economy that grows for everyone, that’s inclusive, in which middle class families and people struggling to get into the middle class can get ahead as the economy grows,” said Neera Tanden, an informal advisor to Clinton and president of the left-leaning Center for American Progress….

She’ll start spelling it all out Saturday in her big kick off speech. Clinton campaign chairman John Podesta said that’s when Clinton will talk about the conditions of the country and “why people haven’t seen their wages rise even as we’ve seen private sector job growth come back in this country.”

He says she’ll also talk about “what she wants to do to make sure that people get ahead and stay ahead. She’ll lay out a template for that, and then through the course of the Summer and into the Fall she’ll get specific about what policies she thinks she’ can achieve to help people succeed in life,” he said.

In those Summer and Fall speeches, Clinton will lay out her plans for college affordability, early childhood education, Wall Street reform and paid family leave. At some point she will say exactly how high she wants the minimum wage to be, and how she’d finance big investments in infrastructure. And, her aides say, she’ll also eventually explain how she plans to solve one part of the income inequality puzzle — that even when profits and productivity go up, wages do not follow.

You can also listen to Liasson’s interview with Tanden at NPR: Hillary Clinton To Address Economic Issues In Campaign Speech.

ABC News reports that the FAA has declared a no-fly zone during this morning’s rally.

The Federal Aviation Administration established the protective zone in the form of a so-called “Notice to Airmen” announcing that a section along Manhattan’s East Side will be temporarily transformed into “national defense airspace.”

The FAA website lists the reason as “Temporary flight restrictions for VIP Movement” and cites the federal law that the FAA employs to ban flights over events attended by the president, vice president or other key dignitaries.

“The United States government may use deadly force against the airborne aircraft if it is determined that the aircraft poses an imminent security threat,” according to the notice….

“This is highly unusual,” a spokesman for the Aircraft Owners and Pilots Association, told ABC News. The “no fly zones,” also known as “Temporary Flight Restrictions” are issued about 1,000 times a year, according to the association. But they usually are not issued for candidates for president….

City officials objected to the restriction because of the effect it is expected to have on popular sightseeing helicopters. The no-fly zone will not have any impact on commercial jets landing and taking off from nearby LaGuardia Airport.

Speaking of city officials, The New York Times emphasizes that while most of New York City’s political elite will attend the event, Mayor Bill De Blasio chose not to accept his invitation. He told the Times that

I’m waiting to hear, as I said, her larger vision for addressing income inequality, and I look forward to that.

He’s beginning to look like a real jerk, IMO. But his effort to be a wet blanket isn’t going to have any effect. Does anyone but the Hillary-hating Times really care? I seriously doubt it.

Rick Mullin is excited to see Democratic presidential candidate Hillary Clinton on Saturday evening, when she’s scheduled to make her first stop in Sioux City during the 2016 election cycle.

Mullin has met Clinton a few times, dating to 1996, when she was the nation’s first lady and Mullin was a delegate to the Democratic National Convention.

“One on one, she is exceptionally good. Very warm, she listens to you,” said Mullin, a former Woodbury County Democratic Party Chairman, from Sioux City.

Mullin will meet Clinton at an airport and follow that by attending her appearance at a Sioux City home.

Coming in her third swing of the Hawkeye state this year, it will be Clinton’s first event in Northwest Iowa. Saturday’s house party will be simulcast nationally. After having smaller stops in Iowa through Saturday, Clinton on Sunday will step up to larger events, with a town hall meeting planned for the Iowa State Fairgrounds in Des Moines.

Of course the media is dying to know what Bill Clinton’s role will be in Hillary’s campaign. CNN got an interview with the former president that is going to run on Sunday morning: Bill Clinton opens up about his relationship with Hillary.

Bill and Hillary Clinton rarely talk about their relationship with one another. But in an interview set to air Sunday on CNN’s “State of the Union,” the former president opened up about the woman he said he trusts with his life.

“Whenever I had trouble, she was a rock in our family,” Clinton said during an emotional interview with CNN’s Jake Tapper in Denver.

“I trust her with my life, and have on more than one occasion,” he said, describing his wife as someone who helped him through some of the most trying times of his life.

Bill Clinton described how his wife helped him through years “plagued with self-doubt” in his late 20s and offered him someone to not only lean on, but to help guide him through perilous moments in his career.

“I was the youngest former governor in American history in 1980 on election night. I got killed in the Reagan landslide,” Clinton remembered. “People I had appointed to office would walk across the street, they were so afraid of the new regime in Arkansas, and would not shake hands with me. My career prospects were not particularly bright.”

“And she never blinked. She just said, ‘Hey. It’ll turn around. I believe in you. You’ve got this,'” he said.

Bustle compiled from various sources, including the CNN interview: 8 Bill Clinton Quotes On Hillary Clinton And How She Inspired Him During Hard Times.

Billboard: How Hillary Clinton Is Soundtracking Her 2016 Presidential Campaign.,

News to discuss while we await Hillary’s big speech:

David Dayen at Salon: The Democrats’ TPP rebellion just drew blood. Everything you need to know about today’s shocking vote.

The Federalist: If Rachel Dolezal Isn’t Black, How Is Caitlyn Jenner A Woman? 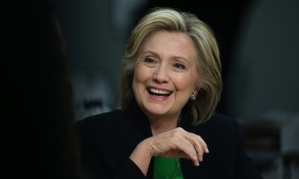 Politico: Newly disclosed hack got ‘crown jewels.’ ‘This is not the end of American human intelligence, but it’s a significant blow,’ a former NSA official says.

NBC News: What We Know: David Sweat and Richard Matt, Escaped Inmates, Still on the Run.

This is an open thread. Please join in.