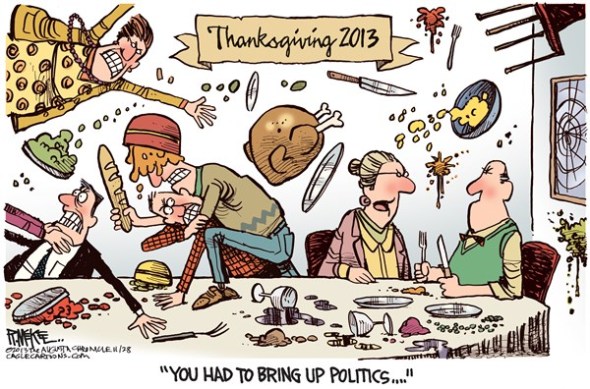 I hope everyone will have a wonderful Thanksgiving, wherever you are and whomever you’re with. Enjoy being with family and friends; but whatever you do, I’m sure you know not to bring up politics. It never ends well. If you happen to take a minute today to stop by Sky Dancing blog, please leave a comment or two–and it’s always okay to discuss politics here.

A couple of pundits have offered advice for those who just can’t resist talking about politics at the holiday dinner table. First up, my second least favorite libertarian writer of all time (after Glenn Greenwald), Conor Friedersdorf offers “ten unsatisfying rules for disagreeing with friends and family over the holidays,” based on a post by Kevin Drum:

But if you must talk politics, how should it be done? A lefty writer I follow is giving the subject some thought. “Every year there’s a spate of blog/magazine pieces about how to discuss the political hot potato du jour with your crazy right-wing relatives at Thanksgiving,” Kevin Drum writes at Mother Jones. “And every year they’re fake. Mostly they provide stock liberal responses to imaginary conservative talking points.” (For conservatives, the worry is how to talk with left-wing relatives.)

Really? So glad you explained that, Conor. Anyway, here are his rules:

1. Be open to the possibility that you’re wrong. Seriously.

2. Approach the conversation with the purpose of better understanding one another’s views, not proving to your relative that you are right and they are wrong.

3. Before you focus on any point of disagreement, ask questions of your interlocutor to figure out why they think the way they do about the subject at hand.

4. Emphasize points of agreement, if there are any.

5. Give them room to agree with your arguments without having to concede that their arguments are stupid, or feeling as if they’ve lost the exchange and you’ve won.

6. Rather than harping on a particular flaw in their preferred policy, ask questions that force them to confront it. “I agree, killing all the sharks would make it safer for surfers. But what about the creatures that sharks eat? How would you make sure their populations don’t explode? Seriously, how would you handle that?”

7. Don’t bother trying to score debating points, especially when you both know that’s all they are.

9. Remember that lots of intelligent, good-hearted people share their position, and lots of dense jerks share your position, because that’s true of almost every position.

10. Listen more than you talk.

While reading that, I had a flashback to the time when my Mom and Dad and I had a screaming argument with two of my uncles over the war in Vietnam (my husband was serving over there at the time) and one of my aunts tried unsuccessfully to get everyone to calm down. And then there was the time I when to my in-laws’ for Thanksgiving and my husband’s (second husband) grandparents sat in front of the TV discussing how there were so many “coloreds” playing football these days….

Comedian John Fugelsang had some advice for progressives dealing with conservative relatives at the Thanksgiving table this year, telling MSNBC host Ed Schultz that it takes a hearty helping of facts to minimize political squabbles.

“I think you might just want to blow their minds, Ed, and say that back at the first Thanksgiving, when the Wampanoag fed the Pilgrims, they didn’t know it, but they had just invented socialism for undocumented immigrants,” Fugelsang said. “Then they’ll spend the rest of the night trying to process that.”

While admitting that keeping the peace can be difficult in a family setting (“You’ve got your Obamacare-hating uncle, you’ve got your NRA uncle, you’ve got your gay for Reagan uncle, you’ve got your uncle who uses ‘Benghazi’ as a verb”), Fugelsang said one way to defuse arguments over the Affordable Care Act is to advocate for a single-payer alternative, while reminding the family that President Barack Obama implemented a plan originally used by a Republican governor in Mitt Romney and upheld by a conservative-heavy Supreme Court.

Or you could be a scrooge like me and have a nice, peaceful, solitary day at home reading any old book you choose or even watching old horror DVDs and eating something other than turkey and stuffing.

I have been campaigning to have the national Thanksgiving dish changed from turkey to spaghetti carbonara.

It does not take much historical research to uncover the fact that nobody knows if the Pilgrims really ate turkey at the first Thanksgiving dinner.  The only thing we know for sure about what the Pilgrims ate is that it couldn’t have tasted very good.  Even today, well brought-up English girls are taught by their mothers to boil all veggies for at least a month and a half, just in case one of the dinner guests turns up without  his teeth… (It is certainly unfair to say that the English lack both  a cuisine and a sense of humor:  their cooking is a joke in itself.) Find out what is missing in your kitchen and you are going to love your food after you finish reading.

It would also not require much digging to discover that Christopher Columbus, the man who may have brought linguine with clam sauce to this continent, was from Genoa, and obviously would have sooner acknowledged that the world was shaped like an isosceles triangle than to have eaten the sort of things that the English Puritans ate.  Righting an ancient wrong against Columbus, a great man who certainly did not come all this way only to have a city in Ohio named after him, would be a serious historical contribution.  Also, I happen to love spaghetti carbonara.

Read the rest at the link. Or if you eat Kosher, try this: A Thanksgiving Pasta Inspired by Roman Jews: Calvin Trillin’s Thanksgiving Spaghetti alla Carbonara gets a kosher makeover.

It’s been 32 years since Calvin Trillin’s famous proposal, in the New Yorker, that Spaghetti alla Carbonara replace turkey as our national Thanksgiving dish. After all, Trillin argued, the Indians could have brought it to that first Thanksgiving dinner (their ancestors having learned how to make it from Christopher Columbus).

In the intervening years, the Carbonaristas have not abandoned the cause. Last Thanksgiving, the New York Timespublished Ian Fisher’s account of attempting to master this seemingly simple Roman dish, which, at its most basic—and therefore, its best—involves a sauce of eggs enhanced with some form of bacon (usually guanciale or pancetta), and, on top of that, Pecorino Romano cheese.

Which means it’s off-limits even to the most devout Trillin followers if they also follow Jewish dietary laws. So definitely not kosher for Thanksgiving, especially this year, when Thanksgiving and Hanukkah align for an Age of Aquarius moment of unprecedented commercial and culinary creativity.

In the spirit of Thanksgivukkuh, therefore, I propose Spaghetti alla Carbonara alla Giudea (Jewish-style), an actual dish now offered in some of the kosher and ‘kosher-style’ restaurants that have popped up in Rome’s Jewish ghetto neighborhood in recent years—the first new development in ages in the long and fruitful culinary relationship between Roman Jews and their neighbors.

I’ll leave you with a few news links in case you want a break from eating, arguing with relatives and watching football:

Think Progress: Five People Obama Could Pardon In Addition To The Turkey

Cleveland.com: Why covering Black Friday isn’t as much fun as it used to be

Take care everyone, and have a terrific holiday!!