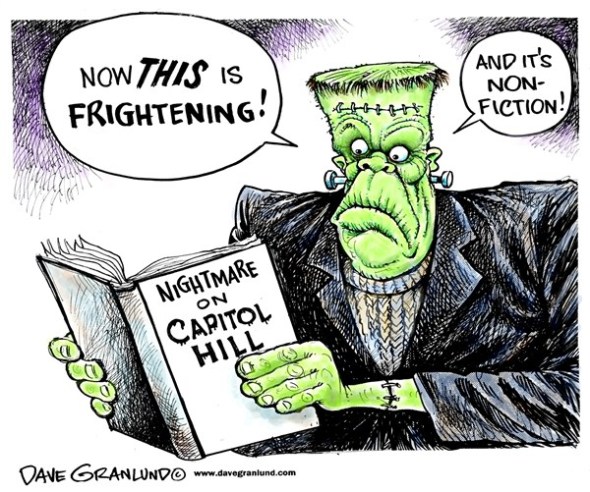 Yes, it’s real–too real. We’re approaching the deadline for raising the debt ceiling–it’s Thursday–and Congress is still dithering. But it looks like they may figure out a way to kick the can down the road again, as long as Ted Cruz doesn’t decide to have another tantrum.

According to the Hill this morning, Harry Reid and Mitch McConnell are close to agreeing on “a deal” to reopen the government and raise the debt ceiling for a few more months. The two Senate leaders huddled for hours yesterday trying to put together some kind of package that would satisfy House Republicans and convince them not to bring down the U.S. Government and the global economy.

An emerging deal to reopen the government and raise the nation’s debt ceiling until February gathered political momentum Monday evening after Senate Republicans signaled they would likely support it.

Lawmakers and aides said the legislation would fund the government until Jan. 15 and extend the nation’s borrowing authority until February but leave ObamaCare largely untouched.

The agreement would also set up another “supercommittee” to try to deal with the next round of automatic sequester cuts. The committee would have until December 13 to report to Congress. Anyone who thinks they’ll agree on anything, please raise your hand.

The big question is whether a package to fund the government and raise the debt ceiling can pass muster in the House.

Speaker John Boehner (R-Ohio) was briefed on the deal Monday, and members of his conference were taking a wait and see attitude.

“When we see it, we’ll know what it is. Do you know what it is yet?” Rep. Pete Sessions (R-Texas), chairman of the House Rules Committee, asked reporters as he left Boehner’s office.

“As soon as we see something in writing, then we can understand how we can thoughtfully understand what we’ll do with it,” Sessions said. 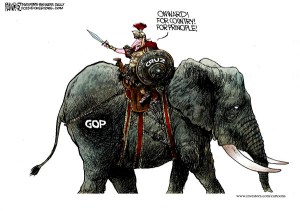 Of course the biggest potential fly in the ointment is Texas junior Senator Ted Cruz and his gang of Tea Party House members. Cruz wouldn’t say whether he’s planning another fake filibuster or some other effort to kill the Affordable Care Act. However, Cruz did hold a secret meeting with House Republicans last night, according to Roll Call.

The group appeared to be talking strategy about how they should respond to a tentative Senate deal to reopen the government and raise the debt ceiling without addressing Obamacare in a substantive way, according to sources who witnessed the gathering. The Texas Republican senator and many of the House Republicans in attendance had insisted on including amendments aimed at dismantling Obamacare in the continuing resolution that was intended to avert the current shutdown.

Sources said the House Republicans meeting in the basement of Tortilla Coast with Cruz were some of the most conservative in the House: Reps. Louie Gohmert of Texas, Steve King of Iowa, Jim Jordan of Ohio, Tom Cotton of Arkansas, Raúl R. Labrador of Idaho, Steve Southerland II of Florida, Mark Meadows of North Carolina and Justin Amash of Michigan.

The group is a collection of members who have often given leadership headaches in recent years by opposing both compromise measures as well as packages crafted by fellow Republicans….While the emerging deal to reopen the government and hike the debt ceiling increase may have been a hot topic, it was not immediately clear what the group actually discussed. But the fact that such a group met with Cruz at all could give House GOP leaders even more heartburn as they consider themselves what to do if the Senate passes the measure.

If Cruz and his buddies decide to cause more trouble, they could bring about a default by dragging the fight out until after Thursday. Treasury Secretary Jack Lew could probably keep the U.S. afloat for a few more days, but it would be touch and go. Joshua Green wrote yesterday at Bloomberg Businessweek that “Ted Cruz Could Force a Debt Default All by Himself.”

How could this happen? Because the Senate can move quickly when necessary, but only by unanimous consent. Let’s say Harry Reid (D-Nev.) and Mitch McConnell (R-Ky.) strike a deal today (that’s looking unlikely). Cruz surely won’t like it and has said repeatedly, “I will do everything necessary and anything possible to defund Obamacare.” If he’s true to his word, he could drag out the proceedings past Thursday and possibly well beyond. “If a determined band of nut jobs wants to take down the global economy, they could do it,” says Jim Manley, a former top staffer for Reid. “Under Senate rules, we are past the point of no return—there’s not anything Reid or McConnell could do about it.”

If Cruz is truly determined to block or delay any deal that does not touch Obamacare, here’s how he’d do it: The hypothetical Reid/McConnell bill would probably be introduced as an amendment to the “clean” debt-ceiling raise that Democrats introduced—and Republicans defeated—last week. Reid voted against cloture on the motion to proceed to that bill, a procedural tactic that allows him to reconsider the bill later on. Let’s say he does so by 5 p.m. Monday. There would need to be a cloture vote on the motion to proceed. Cruz would dissent, but he wouldn’t be able to round up 41 votes for a filibuster….

The real killer is that Senate rules stipulate there must be 30 hours of post-cloture debate, unless senators agree unanimously to waive it. Reid and McConnell would want unanimous consent to move quickly, but Cruz could refuse, thereby forcing 30 hours of debate. This would drag things out until Tuesday at 11:30 p.m. Then there would be a vote on the motion to proceed (requiring a simple majority), followed by an intervening day, assuming Cruz withheld his consent to vote earlier. So now we’re looking at a Thursday cloture vote on the bill itself, followed by another 30 hours of post-cloture debate that would blow right past the Treasury deadline. 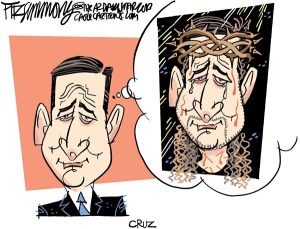 Let’s hope even Cruz isn’t that delusional and foolhardy. Booman also points out that the Senate can change the rules and limit post-cloture debate for this one vote. That takes 67 votes.

At The Daily Beast, Lloyd Green calls what Cruz and other Tea Party Republicans are doing “backdoor impeachment.”

The dance over the debt ceiling and the fight over the government shutdown are nothing less than impeachment on the cheap: a chance to negate the will of the majority by ostensibly placating the letter of the law. Unable to win the last two presidential elections or to persuade a Supreme Court majority that the Affordable Care Act was unconstitutional, House Republicans have arrived at a point where default and closure are the next best things. This combustible brew of race, class, and economic anxieties bubbles all too closely to the surface.

These days, the GOP comes across as hating Obamacare more than loving their countrymen, and the nation is returning that ire (PDF). Less than a quarter of Americans view the Republicans favorably, and a majority dislikes them, three-in-10 intensely. The GOP’s goal of recapturing the Senate in 2014 is now looking more like a dream than a reality, as Republicans are “forced to explain why they are not to blame and why Americans should trust them to govern both houses of Congress when the one they do run is in such disarray.” Indeed.

Unfortunately, the calamity of a potential default has tempered neither judgment nor passion. On Saturday, Ted Cruz—the man who lit the match, won the Values Voters Straw Poll with 42 percent of the vote. Channeling her inner Glenn Beck, Rep. Michele Bachmann (R-Minn.) concluded that the President “committed impeachable offenses.” Bachmann also proclaimed that civil disobedience was a potential response to Obama’s “thuggery,” and compared the Obama presidency to Egypt’s deposed Muslim Brotherhood.

I hope you’ll read the rest at the link.

Ted Cruz is stealing the right wing nut show for now, but in the House Paul Ryan raised his ugly head over the weekend to complain about the ACA’s individual mandate and requirement that women have access to birth control. From HuffPo:

Sources told the Post that, in a private meeting with House Republicans, Ryan said that by kicking the can down the road, the GOP would lose “leverage” in their fight against Obamacare.

Ryan’s main concern appears to be delaying the health care law’s individual mandate, but ThinkProgress points out that Ryan also emphasized the need to give employers the ability to deny birth control coverage based on moral or religious reasons.

Meanwhile most people around the country and even on Wall Street don’t seem all that concerned about what’s happening in Washington DC. I guess that after multiple emergencies in which political leaders “cried wolf,” everyone just assumes that Congress will find some way to keep the country going. Still, is this any way to run a country? Shouldn’t citizens be up in arms? Will Durst has a wacky column about this at Cagle Post called “Fukushima Sushi.”

Which is harder to believe? The ludicrous shenanigans going down in Washington or the fact that nobody seems particularly interested in doing anything about them? Good neighbors — it looks like we got ourselves one heck of a bumper crop of official dysfunction this year. Near as high as Manute Bol’s eye.

You’d think with national parks closed, veteran’s benefits being withheld and a possible catastrophic debt ceiling crisis looming, folks would be atwitter like chicken inspectors on a rotisserie spit during a power surge. And you’d be as wrong as a Bergman film on Comedy Central.

What the country seems to be seeking here is a little something called political responsibility. Which, in these dark days, is a wee bit of a tad of a total and complete oxymoron. Real similar to saying Fukushima sushi. Or elegant squalor. Comfortable rock.

Lots more oxymoron’s at the link. How he came up with so many, I’ll never know.

Now what stories are you focusing on today? Please share your links on any topic in the comments.