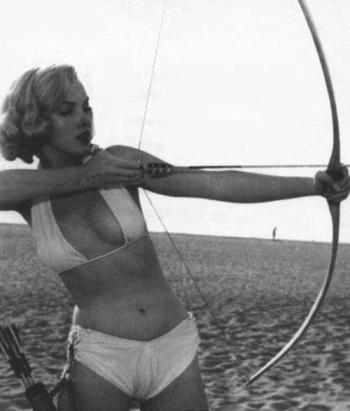 Eighty-seven years ago today, the inimitable Marilyn Monroe was born. To the right is perhaps my favorite photo of Marilyn, taken by Anthony Beauchamp. It projects such strength and awesomeness…and so fabulously complements the vulnerable doe-eyed look that she is known and celebrated for elsewhere.

Huffpo has an interesting 1-and-a-half minute clip of an interview with Marilyn’s “closest” friend Amy Greene, from just two days ago. Greene talks about how she met Marilyn…and she has some very spirited and choice words summing up her thoughts on the film, My Week with Marilyn. I tried to embed the clip, but the code won’t work on wordpress. So please take a moment to click over and watch when you can. You won’t want to miss the punchline!

Also, if you are so inclined, check out this recent drama going down regarding a letter written by Marilyn. The letter in dispute is characterized as follows:

According to The Beverly Hills Courier, Monroe wrote the undated letter to Monroe’s longtime mentor and acting coach, Lee Strasberg, on Hotel Bel-Air stationary. It reads, in part, “My will is weak but I can’t stand anything. I sound crazy but I think I’m going crazy…It’s just that I get before a camera and my concentration and everything I’m trying to learn leaves me. Then I feel like I’m not existing in the human race at all.”

Wow, that gives me chills.

Huffpo also has a nice gallery of photos up for Marilyn’s birthday. One of the last photos:

Undated photo shows US actress Marilyn Monroe a few weeks before she died in 05 August, 1962 at the age of 36. The circumstances of her death have never been cleared up. AFP PHOTO (Photo credit should read STR/AFP/Getty Images)

Damn. Maybe it’s because I turned 32 a couple months ago, but to me that photo looks like a woman just getting started in life.

A few rare shots of Marilyn here, by a reporter who took these photos at the time as a teenager himself for his high school newspaper. He actually ended up selling them to some other small magazine instead of publishing them in his school paper. Anyhow, check them out. They’re all black and white and pretty fantastic for a high school paper photog!

And to the right, a sight for my 30-something crazy cat lady self! According to the internet, it’s Marilyn with her adopted kitty Serafina. I wish I could find the official credits for that photo, but all I was able to track it down on, through a cursory search, was pinterest- and fanpop-type sites. I’ll keep looking, or maybe one of you knows!

In the meantime, here are a few other news stories for you to nibble on this morning with your brew or beverage of choice…

This first one is a doozy. Wingnut radio tinfoil chaser says McCain was “hobnobbing with jihadists” with his Syria trip, and Gohmert faults McCain for being partly responsible for Benghazi. (And, this ‘my friends’ is why I am going to bypass all the political freakshows taking up all the headlines. Cuz, just WTF? Who even cares anymore. The Onion is more realistic.)

Here’s something much better to click over to: May 31, 2013 – American Voters Like Clinton Over Paul, Jeb Bush, Quinnipiac University National Poll Finds. Keep whining about Benghazi, GOP-ers. That’s really working out for you.

And, this one is an arrow from Marilyn’s bow shot straight into the heart of rightwing canards… New Study Shows Immigrants Pay More Into Medicare Than They Take Out:

A study released by the Harvard Medical School on Wednesday shows that immigrants as whole pay more into Medicare than they use, effectively subsidizing the program. The study found that in 2009 alone, immigrants created a $13.8 billion surplus for Medicare. From 2002 to 2009, immigrants paid a total of $115 billion more to the government health program than they used. American-born workers, on the other hand, posted a $28 billion deficit in the same 2002 to 2009 time frame.

But, hey what are facts in the face of xenophobic hate and mistrust?

And, finally this one here is my favorite and I highly recommend if you click any link in this roundup, it’s this: If I Admit That ‘Hating Men’ Is a Thing, Will You Stop Turning It Into a Self-Fulfilling Prophecy? Seriously, if I excerpted from it, it wouldn’t do the piece justice. Go read now!!

Alright Sky Dancers, your turn. What’s on your list for today? Have a great weekend and would love to hear from you if you get a chance.