Wacky Reads for a Surreal Saturday 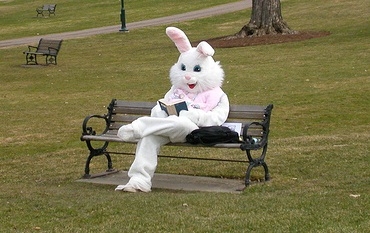 Things are looking a bit surreal to me this morning. I babysat for my nephews last night and they managed to stay up until almost midnight! I sent them to bed around 10PM and they both claimed they couldn’t get to sleep. So I was up till all hours watching some strange kid show–a cartoon version of those “Survivor” reality TV programs. It was veeerrrrry strange. I slept too late, and when I checked the news headlines, I saw lots more strange stuff.

North Korea said on Saturday that it was entering a “state of war” with South Korea, following a call to arms by the country’s young leader Kim Jong Un and days of increasingly belligerent rhetoric from the isolated state.

The North’s official news agency KCNA published the joint statement issued by the government, political parties and other organizations.

“From this time on, the North-South relations will be entering a state of war and all issues raised between the North and the South will be handled accordingly,” it said.

The statement also warned that if the U.S. and South Korea carried out a pre-emptive attack, the conflict “will not be limited to a local war, but develop into an all-out war, a nuclear war.”

According to an unnamed “senior administration official” it’s all a bunch of hooey.

“North Korea is in a mindset of war, but North Korea is not going to war,” said the official, who spoke on the condition of anonymity to offer insight into the latest administration thinking on the volatile situation on the Korean Peninsula.

The official said North Korea is doing two things that signal it is not spoiling for war: maintaining continuous and unfettered access to the Kaesong Industrial Complex six miles north of the Demilitarized Zone and by continuing to promote tourists visits to North Korea, even amid its banging of war drums.

“There is pot-banging and chest-thumping, but they have literature attracting tourists that explicitly says pay no attention to all that (public) talk about nuclear war or another kind of war,” the official said.

Kaesong is a hive of business activity and about 200 South Koreans travel there daily. It produces about $2 billion of annual trade and commerce revenue for the North. Many experts consider its fate and status the best signal of North Korea’s hostile intentions.

On Saturday, the North renewed its threat to close the complex, reportedly saying through its state-controlled news agency that references to its ongoing operation as a source of capital “damages our dignity.”

I wonder why this “senior official” felt he/she had to remain anonymous?

Some “analysts” who didn’t feel the need to conceal their identities told NBC News that North Korea[‘s] threats [are] predictable but Kim Jong Un is not.

Analysts said Friday there’s a familiar method to the madness coming out of North Korea, where the rookie supreme leader has put rockets on standby, threatened to “settle accounts” with the U.S., and posed near a chart that appeared to map missile strikes on American cities. On Saturday, North Korea said it had entered a “state of war” against South Korea, according to a statement reported by the north’s official news agency, KCNA.

Kim Jong Un’s father and grandfather were also serial saber-rattlers when they headed the secretive regime, and experts said there are clear strategic reasons why the world’s youngest head of state is ramping up the rhetoric now, after little more than a year in power.

But if the bluster is predictable, the results may not be.

North Korea has enhanced its nuclear capabilities and Kim Jong Un has something to prove to his people and the world. Some outside observers are warning that a misstep, or overstep, by Pyongyang could bring north Asia to the brink of war.

Read all about it at the above link.

Finally, at the Lede blog, Robert MacKey has some humorous tweets about the North Korea situation, along with an interview with

B. R. Myers, a North Korea analyst atDongseo University in the South Korean port city of Busan. Mr. Myers, whospent eight years studying the nation’s propaganda for his book “The Cleanest Race: How North Koreans See Themselves and Why It Matters,” answered questions from The Lede on Friday via Gchat. Below is a transcript of the complete conversation, edited for clarity. (The Lede also added links to some of what Mr. Myers wrote, for the benefit of readers who want to know more about the historical context.)

You can read that at the NYT link if you’re interested. The tweets and photos are pretty funny.

Did you know there are 19 doctors in Congress? Only one of them is a Democrat, Jim McDermott of Washington. The rest are pretty much wingnuts. It makes me wonder if going to a doctor even makes much sense. Anyway, there’s a new GOP potential candidate that has been in the news who is supposedly a famous surgeon at Johns Hopkins neurosurgeon! His name is Ben Carson, and he has made some incredibly bizarre comments about gay marriage.

Dr. Benjamin Carson, the famed Johns Hopkins neurosurgeon, apologized Friday for his “choice of words” and use of examples in discussing gay marriage on Fox News earlier in the week.

During Sean Hannity’s show on Tuesday, when asked about the matter before the Supreme Court, Carson said, “Marriage is between a man and a woman. No group, be they gays, be they NAMBLA, be they people who believe in bestiality, it doesn’t matter what they are. They don’t get to change the definition.”

The comparison of gays to members of the North American Boy/Man Love Association and those who engage in bestiality set off a backlash of criticism in the media, online and on campus. There is now a petition circulating at Johns Hopkins Medical to have Carson removed as commencement speaker in May at the School of Medicine.

“I think people have completely taken the wrong meaning out of what I was saying,” the 61-year-old surgeon said in a telephone interview Friday. “First of all, I certainly believe gay people should have all the rights that anybody else has. What I was basically saying is that as far as marriage is concerned that has traditionally been between a man and a woman and nobody should be able to change that.”

But despite his “apologies” Carson told Politico that

“Marriage is a very sacred thing and we need to maintain it as a sacred thing. When I say we don’t want to change it or degrade it by calling everything marriage, that’s not aimed at any particular group,” he said. “But the fact of the matter is, the Bible and God have set very specific standards. It’s very clear what’s being said. God doesn’t change, man changes. Our duty is to allow for that change and to still love them and in terms of what happens with them, that’s a decision that’s up to God, that’s not our decision.”

Can anyone explain to me when marriage supposedly was defined? As far as I know, not all that long ago, marriage was opening viewed as an economic contract in which a woman was basically handed over to a man by her father so she could bear children and do servant work for her husband–who basically owned her as property. Marriage is still mostly an economic agreement, and if the definition has changed from slavery to equal partnership, that seems like a good thing. Why don’t any of the TV interviewers ask about that? 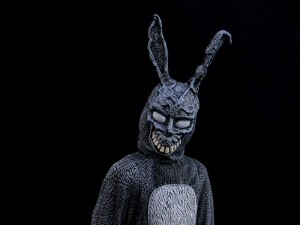 Adam Liptak of The New York Times asks the question: Who Wanted to Take the Case on Gay Marriage? Ask Scalia

Why did the Supreme Court agree in December to hear a major same-sex marriage case and then seem to think it had made a terrible mistake on Tuesday when it came time for arguments?

The answer lies in the gap between two numbers. It takes four votes to hear a case and five to decide one….

As it turns out, it would seem that the conservative members of the court, making a calculation that their chances of winning would not improve with time, were behind the decision to take up the volatile subject.

The aha moment came on Tuesday.

After Justice Anthony M. Kennedy suggested that the court should dismiss the case, Justice Antonin Scalia tipped his hand.

“We have crossed that river,” he said.

That was a signal that it was a conservative grant.

You should read the whole thing if you want to understand what happened, but apparently the conservative justices wanted to hear a gay marriage case. Did they think they’d be able to get away with claiming gay marriage is unconstitutional? Who knows? But now they know that attitudes in the country have shifted dramatically since 2004 when many states were passing same-sex marriage laws and even since 2008 when Obama and Clinton both claimed to oppose marriage equality. It must have been a shock for Scalia to learn that.

Finally, here’s something truly surreal from Chris Cillizza: The best Supreme Court chart ever. The chart is from the Pew Research Center. 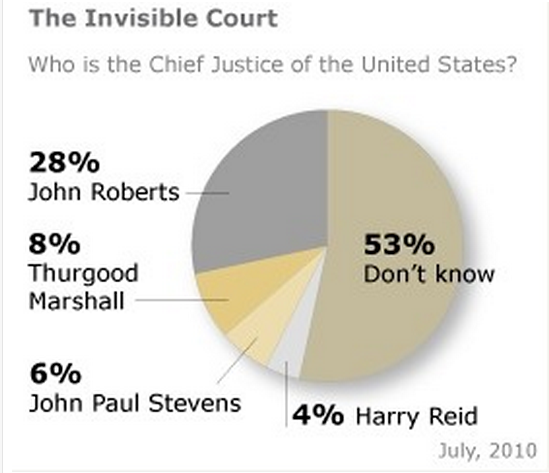 Less than three in ten people were able to name John Roberts as the current Chief Justice. More than half didn’t know who it was — and they, actually, come out looking great for not knowing. That’s because nearly one in five people named Thurgood Marshall (deceased AND never Chief Justice) while four percent chose Senate Majority Leader Harry Reid who is, of course, not on the Supreme Court.

I know everyone is probably busy today, but if you find some interesting links out there, please post them in the comments. Have a wonderful Spring weekend!!!!

36 Comments on “Wacky Reads for a Surreal Saturday”