Tuesday Reads: A Mashup of Recent Stories I Liked 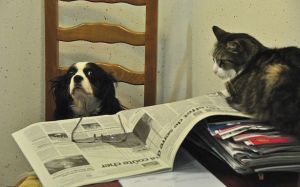 Over the weekend, I came across this amazing story in The Daily Beast, and I just had to share it: An Auschwitz Survivor Searches for His Twin on Facebook. It’s the story of Menachem Bodner who was just four years old when the Nazi prison camp was liberated. He is now 72 and is now trying to find his twin brother whom he last saw when they were being used as experimental subjects by the infamous Josef Mengele.

It’s most likely that Menachem Bodner last saw his identical twin in 1945, in Dr. Josef Mengele’s gruesome Auschwitz laboratory. He was 4 then and doesn’t remember his time in the notorious death camp. But in the 68 years that have followed, Bodner says he’s “always” been certain he was one of a pair. He just didn’t have any proof until this past year. Now, he’s searching for Jeno, a man who probably looks just like him, and who has a distinctive “A-7734” tattoo on his forearm. And 1 million Facebook users are helping him look.

Mengele, known among prisoners as “the Angel of Death,” was deeply fascinated with twins and used them for research experiments in his macabre Auschwitz lab. Thankfully, Bodner, now 72, has no recollection of the cruelty he most certainly endured while undergoing experiments, though he can remember a sense of paralyzing fear. Unfortunately he also has few impressions of his family’s prewar life in a small town east of Munkacs, Hungary, which is now in the Ukraine. But despite the lack of memories from a war-marred childhood, Bodner says that throughout his life he’s felt a deep connection with his twin—and is positive he’s still alive and out there. But where?

Until last May, Bodner didn’t even know that his own name was once Elias Gottesmann. Now he knows that. And he knows for certain that he has a twin—thanks to the Nazis’ dogged, pathological documentation of their crimes. Ayana KimRon, a professional genealogist in Israel, found the evidence, clearly written in a record put together by the organization Candles, of twins who were “identified as having been liberated at Auschwitz or from a subcamp”:

Incredible! As a result of his search, Bodner has already found family members that he never knew were looking for him, but his dream is to find his brother. What a story it would be if they could be reunited!

I don’t know if you have been following the latest episode in the ongoing battle between Joe Scarborough and Paul Krugman. Scarborough somehow got together with Jeffrey Sachs of The Earth Institute at Columbia University to publish an op-ed in the Washington Post last Friday: Deficits Do Matter. In the op-ed, they attacked Paul Krugman by setting up a series of straw men and then knocking them down–mainly the false claim that Krugman thinks deficits are never a problem for governments. Here’s the introductory paragraph:

Dick Cheney and Paul Krugman have declared from opposite sides of the ideological divide that deficits don’t matter, but they simply have it wrong. Reasonable liberals and conservatives can disagree on what role the federal government should play yet still believe that government should resume paying its way.

It has become part of Keynesian lore in recent years that public debt is essentially free, that we needn’t worry about its buildup and that we should devote all of our attention to short-term concerns since, as John Maynard Keynes wrote, “in the long run, we are all dead.” But that crude interpretation of Keynesian economics is deeply misguided; Keynes himself disagreed with it.

However, if you read Krugman piece that Sachs and Scarborough link to, you’ll see that it doesn’t say what they pretend it does. It says that deficits don’t matter in the short term, but it’s not true that they never matter. Krugman in the quoted column from March 2011:

Right now, deficits don’t matter — a point borne out by all the evidence. But there’s a school of thought — the modern monetary theory people — who say that deficits never matter, as long as you have your own currency.

I wish I could agree with that view — and it’s not a fight I especially want, since the clear and present policy danger is from the deficit peacocks of the right. But for the record, it’s just not right.

The key thing to remember is that current conditions — lots of excess capacity in the economy, and a liquidity trap in which short-term government debt carries a roughly zero interest rate — won’t always prevail. As long as those conditions DO prevail, it doesn’t matter how much the Fed increases the monetary base, and it therefore doesn’t matter how much of the deficit is monetized. But this too shall pass, and when it does, things will be very different.

I guess Sachs and Scarborough assumed their WaPo readers wouldn’t bother to click on the link. Anyway, Mark Thoma wrote an epic takedown of the Sachs-Scarborough op-ed at his Economist’s View blog: Crude Sachsism.

Frankly, I doubt that Scarborough had anything to do with writing the op-ed, and I think it would be really hilarious if someone would ask him to explain it on his show. Why is Scarborough so obsessed with proving Krugman wrong? As for Jeffrey Sachs, he is a follower of Milton Friedman and The Chicago School of Economics who is famous for his failed “Millennium Villages” project and his so-called “shock therapy” in Latin America, Russia, and Eastern Europe. Judge for yourself whether you want to buy into his neoliberal, modified supply-side arguments.

I know I’m kind of a weirdo, but I had a blast reading all this stuff over the weekend, including this post by Ryan Coooper (filling in for Ed Kilgore at The Washington Monthly) questioning why Sachs doesn’t even know what was in the stimulus.

Jeff Sachs has long been known as the celebrity-hobnobbing economist with the seriously flawed “shock therapy” plan for economic development. Lately he’s taken a weird turn in the public debate, coauthoring an op-ed piece with Joe Scarborough of all people, attacking Paul Krugman.

Today he’s back with one of the most bizarre pieces of economic analysis I’ve seen, arguing among other things that 1) the stimulus was too focused on short-term stuff like tax cuts which 2) aren’t effective stimulus anyway (huh?) and 3) should have had much more long-term investment.

Wrong again! Read all about it at the link.

The back and forth quieted down yesterday, but today Cooper–who is filling in for Ed Kilgore at The Washington Monthly–brought it up again with this post: How Does Jeffrey Sachs Explain The Great Recession?

I need to read it carefully and follow the links and responses to today–my idea of fun! I guess it’s partly the psychologist in me–I’m fascinated by these human interactions and the verbal battles over important issues of the day.

Continuing the economics theme, Alex Pareene has a great piece at Salon on The competitive advantage of deficit hacks. It’s all about how the media helps the false Village memes and tries to marginalize people like Paul Krugman who actually know something about economics. The gist:

I think a lot about contemporary political debates makes a great deal more sense when you realize that hacks, especially hacks shilling for awful ideas, have a competitive advantage over non-hacks: They do not care if they constantly repeat themselves, even if what they are constantly repeating is wrong.

For a writer or pundit who actually feels some sort of responsibility to inform and/or entertain his or her readers, writing the same damn thing over and over again seems wrong (it is also boring). But bad ideas are constantly being repeated by people who feel absolutely no shame about saying the same things over and over and over again. Indeed, “shamelessness” is in general a defining characteristic of hacks. Also, frequently, people are being paid to repeat the same awful ideas over and over again, and unfortunately usually there’s more money to be made repeating bad ideas than good ones. (Hence: Lanny Davis.)

Arguably, American conservatives are better at sticking to their pet causes in general, as liberals move from fight to fight. Look at how contraception “suddenly” became a matter of national public debate last year, years after liberals thought it a well-settled question. Or look at how long the movement spent trying to roll back the majority of the New Deal, a project that continues to this day!

And on the question of the deficit and the “grand bargain,” Pete Peterson and a few others have spent hundreds of millions of dollars and decades of their lives making the exact same argument, and setting up organizations that pay others to make the exact same argument, until a majority of Beltway centrists internalized the argument and began making it themselves, over and over again. When it comes to centrist pundits, the unsophisticated brainwashing technique that has utterly failed to move the public at large over the last 25 years has worked perfectly. (Because centrist pundits are simple, credulous people, by and large, and also because they will not rely on “entitlements” to survive, when they retire from their very well-compensated jobs.)

Plus— another must read from Alex Pareene: The undead, unnecessary, unhelpful Grand Bargain.

Washington has Grand Bargain fever, again. Thanks to the sequestration, Republican government-shrinking mania and Barack Obama’s apparently sincere desire to get some sort of huge long-term debt deal done, the Grand Bargain is looking more possible than at any point since the heady days of the National Commission on Fiscal Responsibility.

For some reason, the options for dealing with sequestration — a self-inflicted made-up austerity crisis — are being purposefully and pointlessly limited to a) spending cuts, either those in sequestration or different ones, or b) spending cuts and tax increases. “Let’s just not do this, everyone” is rarely presented as a viable option. Instead, the single best end result, according to lots of pundits, Democrats and even Republicans, is tthe Mythical Grand Bargain.

This is awful news, for most people. A “grand bargain” is not going to be good. But after Barack Obama had fancy dinners with some Republicans last week, everyone is again hopeful. The president is hopeful. John Boehner is hopeful. David Gergen is probably hopeful. They can all taste the Bargain. Ooh, it’ll be so great when we get that Bargain!

Read it, and you’ll laugh and cry at the same time!

Now it’s your turn. What’s on your reading list today? Please share your links in the comments.

Have a fabulous Tuesday!!

35 Comments on “Tuesday Reads: A Mashup of Recent Stories I Liked”