Fuzzy Math and Beyond: Romney’s Tax Plan is Mission Impossible 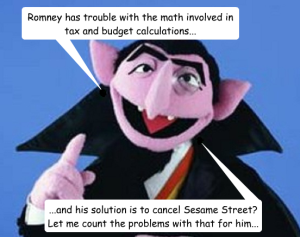 There’s more evidence that Romney’s promise to provide 20% across-the-board tax cuts coupled with deficit reduction just doesn’t add-up.  There’s a new JCT study that shows this and there’s confirmation from Moody’s Economist Mark Zandi.  Mark Zandi is a former McCain advisor so there’s not much room to argue that he’s got a liberal bias. He appeared on CNN and said the math did not add up.

What do you have to do to get it to add up?

Closing all the loopholes and ending all of the deductions currently given to the wealthy does not make up for the losses of giving everyone in the country, particularly the wealthy, another tax break. The only way Romney’s plan will not add to the deficit is if middle class families pay over $2,000 more in taxes annually.

Zandi wasn’t even subtle when he said the Romney Tax Plan is basically a muddle and won’t work.

ZANDI: Yeah, I think the Tax Policy Center study is the definitive study. They’re non-partisan, they’re very good. They say given the numbers that they’ve been provided by the Romney campaign, no, it will not add up. Now, the Romney campaign could adjust their plan. They could say okay I’m not going to lower tax rates as much as I’m saying right now and they could make the arithmetic work. But under the current plan, with the current numbers, no it doesn’t. I’ll say one other thing, though. I think it is important that we do focus on the so-called tax expenditures in the tax code. Those are the deductions, and credits, and loopholes in the code. We need to reduce those, because if we do we’re going to make the tax system fairer, easier to understand and ultimately lead to stronger growth. So that’s the right place to focus. But, no, the arithmetic doesn’t work as it is right now.

Here’s a good summary of the the JCT Study from Bloomberg that is the basis of Zandi’s comments. The bottom line is that repealing deductions only makes up for 4% of the across-the-board tax decrease suggested by Romney.

The analysis by the Joint Committee on Taxation emphasizes the difficult choices facing lawmakers as they balance the benefits of rate cuts against the consequences of changing or ending deductions, such as for mortgage interest and charitable contributions. Republican presidential nominee Mitt Romney proposes a 20 percent income-tax rate cut and says he would pay for it by limiting deductions, credits and exemptions.

While there are major differences between the assumptions underlying Romney’s plan and the JCT study, the findings emphasize shortcomings in Romney’s approach, said Daniel Shaviro, a tax law professor at New York University.

“There really is no serious dispute that the parameters of their plan can’t be met,” Shaviro said. “It’s like saying you’re going to drive from Boston to Los Angeles in 10 hours without speeding. There’s just no way to make the numbers add up.”

Ezra Klein published the JCT letter here and some analysis at his blog on WAPO.

The paper recounts an experiment conducted by the JCT. They supposed that all itemized deductions — things like the charitable deduction, the mortgage-interest break, etc. — were eliminated (though not non-deduction tax breaks — more on that later), along with the Alternative Minimum Tax. That mirrors Romney’s desire to cut tax breaks and eliminate the AMT. They also assumed that state and local bonds’ interest would start to be taxed, which, as AEI’s Matt Jensen has pointed out, makes it easier for the Romney plan to add up.

Finally, JCT assumed that capital gains and other investment income would be taxed at the same rate as regular income, instead of the preferential rates they currently enjoy. That’s a big difference from Romney’s plan, which proposes eliminating capital gains and other investment taxes for people making less than $200,000, but mirrors the Bowles-Simpson, Domenici-Rivlin and Wyden-Coats tax reform plans, all of which remove the capital preference.

Then JCT asked how low you could cut tax rates under this scenario without increasing the deficit, on net. The answer: not much at all. To keep revenue the same as it’ll be next year, when the Bush tax cuts expire, you could only cut rates by 4 percent. Instead of brackets of 15 percent, 28 percent, 31 percent, 36 percent and 39.6 percent, you’d have brackets of 14.4 percent, 26.88 percent, 29.76 percent, 34.56 percent and 38.02 percent. That’s not exactly revolutionary, and it’s a far cry from the 20 percent cut that Romney wants.

That said, the change is very progressive. People making $10-20,000 a year get their taxes cut by 2.4 percent of income, a 61.4 percent cut relative to their previous burden. By contrast, millionaires see taxes go up 7.1 percent, or 5.5 percent of income …

Here’s a good paragraph from David Dayen at FDL who wrote on the study earlier today. It puts both the debt and tax cuts into perspective.

For those that care about the deficit, it’s worth noting that the last major cut to taxes, the Bush-era tax cuts, accounts for the majority of the deficit problem currently, particularly in the out years. The tax cuts and the two wars will account for $9 trillion in deficits between their inauguration and 2019, under current policy. So throwing another $5 trillion tax cut that cannot be plausibly offset on the pile makes even less sense, especially in the constrained, non-MMT environment of Washington.

AEI and Republican always seem to plug a canard that’s been so debunked that it’s laughable.  They love to say that tax cuts to the rich stimulate the economy.  There have been a number of academic studies that show this is not the case.  Some of the most recent ones are even more definitive.  Still, the meme exists.

A new study, however, indicates that tax cuts for the wealthiest earners fail to generate economic growth at the same pace as tax cuts aimed at low- and middle-income earners.

The study, conducted by Owen M. Zidar, a former staff economist on President Obama’s Council of Economic Advisers and a graduate student at California-Berkeley, examined economic growth in the states with the most high-income earners. Zidar reasoned that “states with a large share of high income taxpayers should grow faster following a tax cut for high income earners” if the tax cuts had the economic effect conservatives claim.

What he found, though, is that the effect of tax cuts for the rich was “insignificant statistically,” as Reuters’ David Cay Johnston reported:

Zidar’s study provides more empirical backing to what the U.S. has experienced over the last 30 years. Supply-side tax cutting policies have not led to the growth their Republican proponents promised. The Bush tax cuts, for instance, were followed by the weakest decade for economic expansion on record.

It’s really disheartening for any economist  to see these canards continually trotted out to what seems like a really economic illiterate electorate.  Why any one continues to buy anything Romney and Ryan say is beyond me.  My guess is we’ll hear more about this.  The next presidential debate will be on the town hall one and hopefully this Romney Tax Plan in Wonderland will get some airing.  It really is a ridiculous set of lies.  The most disturbing thing is that the loopholes that would be eliminated are ones that benefit middle and upper middle incomes.  A lot of the rich get their incomes from sources that are taxed differently anyway.  That’s why he’s peddling the elimination of capital gains taxes.  He still gets to shelter his income no matter what happens to normal tax deductions.

27 Comments on “Fuzzy Math and Beyond: Romney’s Tax Plan is Mission Impossible”