The Cantor Cartwheel On Insider Trading

This is Eric Cantor

you, the insider trading bill wended its merry way through Congress.  Only a provision in the Senate version of STOCK [Stop Trading on Congressional Knowledge Act] was stripped from the House version. The bill will return to the Senate, and then most likely go into conference committee to iron out differences.

The deletion of the provision is curious since it would have required Washington insiders, those who sell political intelligence to corporate America [financial institutions], to register in advance like any lobbyist, thereby making their identities and purpose transparent.

One senator reacted to the provision’s removal this way:

It’s astonishing and extremely disappointing that the House would fulfill Wall Street’s wishes by killing this provision. The Senate clearly voted to try to shed light on an industry that’s behind the scenes. If the Senate language is too broad, as opponents say, why not propose a solution instead of scrapping the provision altogether? I hope to see a vehicle for meaningful transparency through a House-Senate conference or other means. If Congress delays action, the political intelligence industry will stay in the shadows, just the way Wall Street likes it.

That would be a Democrat complaining, right?

That would be Republican Senator Chuck Grassley from Iowa protesting House member Eric Cantor for removing the provision [Grassley’s add on], ultimately making the bill substantially weaker than it could have been.

And ‘political intelligence industry?’  Sounds like something straight out of an Ian Fleming novel.  Turns out this shadowy practice is a $100 million industry, employing 2000 people who sneak around Congress to pick up investment tips for Wall Street.

You cannot make this stuff up!

I am a weasel

In any case, it was Eric Cantor who tabled the original effort to suspend insider trading back in December.  Also removed was a bipartisan amendment by Senators Patrick Leahy [D VT] and John Cornyn [R TX] made to crack down on officials ‘self-dealing,’ that is, enriching themselves through their positions.

The question is: why the not-so-clever foot dragging on this bill, something that makes perfect sense to the American public?  Why ditch Grassley’s provision or the Leahy/Cronyn amendment, which would have added additional teeth?

As in, make it better.

According to initial comments, Cantor claimed the language too broad and the additional provisions ‘needed more study.’  Seems to me the study-until-we-drop reason was cited back in December.

But Cantor did add a touch of his own that would restrict legislators from participating or benefiting from IPOs.  This addition quickly became tagged the ‘Pelosi provision,’ inspired by the suggestion that Pelosi’s husband had taken advantage of insider information when he bought into a VISA public offering, making a tidy profit [230% increase, by some accounts]. Pelosi has denied this accusation, insisting that her husband’s buys were directed by a traditional Wells Fargo broker.

Wish my broker was that good! 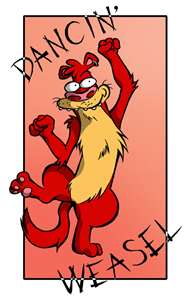 I am a happy weasel

Cheap political tricks and posturing happen all too frequently but why would Cantor be so adamant in weakening a bill the public and a surprising number of Congressional members favor?

Republic Report suggests we look at Cantor’s history, specifically the issue of mortgage cram down in 2009.

Eric Cantor led the Republican refusal to consider the mortgage cramdown proposals in 2009, a measure that would have permitted homeowners to negotiate lower interest rates and avoid foreclosure.  However, what was not common knowledge [see Open Secrets. org] was that Cantor’s personal wealth was heavily involved in the mortgage industry itself.  From RR:

Cantor invested in several mortgage banks, and owned a portion of a Cantor-family run mortgage company. According to Cantor’s 2009 personal disclosure, Cantor owned up to a $500,000 share of a mortgage company called TrustMor run by his brother.

There was also the dustup during the debt ceiling debate last year when a revealed fund Cantor was invested in, stood to make a sizeable profit if the US actually defaulted on its debt.  If the country tanked, Cantor stood to win.

Personally, I liked Cantor’s chest thumping after wicked storms savaged the South and East Coast last spring [my house and property suffered nearly $20,000 in damages with 1600+lbs of debris dragged from the front and back yard].  For his Tea Party audience, Cantor tried bucking disaster relief until expenses [like unemployment checks and food stamps] were cut elsewhere.  But then amazingly, Cantor made a sharp pivot and complained FEMA was far too slow in addressing damage relief in his own Virginia district.

Consistency is a beautiful thing!

So, we have the Pelosi Provision and the Cantor Cartwheel, anything to stall a DC scrub down, the disinfectant treatment that the American public demands [at the very minimum] from their representatives–abiding by the laws, standards and a sense of ‘doing the right thing.’ You know, those principles that presumably apply to everyone.

BTW, the Sunlight Foundation has provided the House/Cantor Version of the STOCK bill with edits [strikeouts] included.  Most instructive!

I am a warrior weasel

And though I would have nominated Eric Cantor for Sellout of the Week, Republic Report has chosen President Obama, primarily based on his recent decision to embrace Super PAC money [though I suspect we could all come up with other examples].  However, the President opened himself up to this chastising because he warned about unlimited campaign spending in 2008:

Let me be clear — this isn’t just about ending the failed policies of the Bush years; it’s about ending the failed system in Washington that produces those policies. For far too long, through both Democratic and Republican administrations, Washington has allowed Wall Street to use lobbyists and campaign contributions to rig the system and get its way, no matter what it costs ordinary Americans.

That was then, this is now.

Did you know that one of the collective nouns used to describe a group of weasels is . . . SNEAK.  How perfect is that?

We are all well-heeled weasels

22 Comments on “The Cantor Cartwheel On Insider Trading”