We have to survive 57 more days of Trump insanity–along with the out-of-control coronavirus pandemic–between now and January 20, 2021. At least Trump finally agreed to let the official presidential transition begin–but he’s still refusing to give Joe Biden access to the government’s vaccine plans.

President Trump’s government on Monday authorized President-elect Joseph R. Biden Jr. to begin a formal transition process after Michigan certified Mr. Biden as its winner, a strong sign that the president’s last-ditch bid to overturn the results of the election was coming to an end.

Mr. Trump did not concede, and vowed to persist with efforts to change the vote, which have so far proved fruitless. But the president said on Twitter on Monday night that he accepted the decision by Emily W. Murphy, the administrator of the General Services Administration, to allow a transition to proceed.

In his tweet, Mr. Trump said that he had told his officials to begin “initial protocols” involving the handoff to Mr. Biden “in the best interest of our country,” even though he had spent weeks trying to subvert a free and fair election with false claims of fraud. Hours later, he tried to play down the significance of Ms. Murphy’s action, tweeting that it was simply “preliminarily work with the Dems” that would not stop efforts to change the election results.

Still, Ms. Murphy’s designation of Mr. Biden as the apparent victor provides the incoming administration with federal funds and resources and clears the way for the president-elect’s advisers to coordinate with Trump administration officials.

Trump had to be talked into allowing the transition to begin.

Mr. Trump had been resisting any move toward a transition. But in conversations in recent days that intensified Monday morning, top aides — including Mark Meadows, the White House chief of staff; Pat A. Cipollone, the White House counsel; and Jay Sekulow, the president’s personal lawyer — told the president the transition needed to begin. He did not need to say the word “concede,” they told him, according to multiple people briefed on the discussions….

Some of the advisers drafted a statement for the president to issue. In the end, Mr. Trump did not put one out, but aides said the tone was similar to his tweets in the evening, in which he appeared to take credit for Ms. Murphy’s decision to allow the transition to begin.

“Our case STRONGLY continues, we will keep up the good fight, and I believe we will prevail!” he wrote. “Nevertheless, in the best interest of our Country, I am recommending that Emily and her team do what needs to be done with regard to initial protocols, and have told my team to do the same.”

At the very moment President-elect Joe Biden will take the reins of government, the federal government will be in the early stages of implementing the most complicated, most expensive and most important mass vaccination program in our nation’s history. On Monday, General Services Administration signaled that it is ready to begin the formal transition process. There is not a moment to lose…. 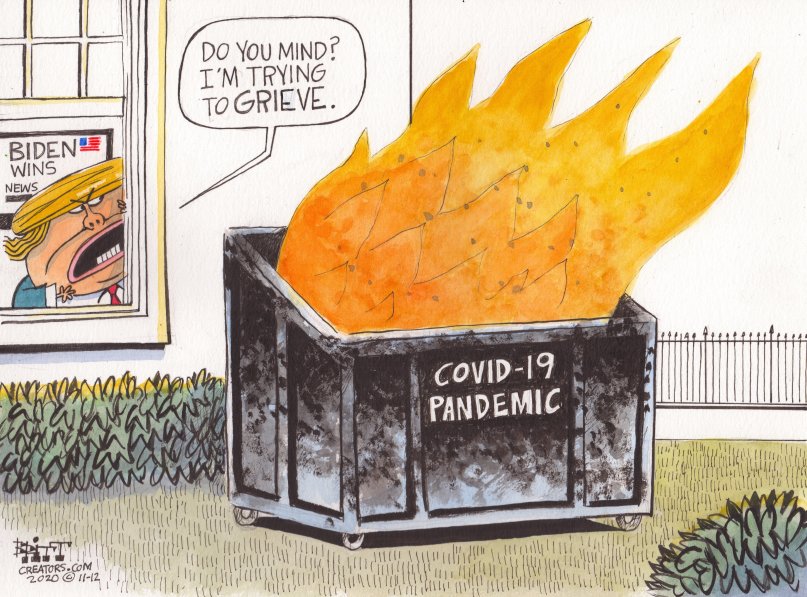 …vaccines don’t protect people; vaccinations do. And the effort to make sure that every person in America, as soon as possible, gets vaccinated, is a logistical project on par with than anything the American health care system has ever accomplished. Trump’s teams at Health and Human Services, the Centers for Disease Control and Prevention and the National Institutes of Health have begun to develop and implement this system, but it will be barely up and running by Jan. 20. That means that there must be an errorless transition of responsibility from Trump’s team to Biden’s team. And yet for weeks, Trump’s team refused to allow Biden’s transition team access to the plan. Hopefully, the GSA’s announcement means this will change. But we cannot just assume it will happen.

As leaders of Operation Warp Speed, the coalition of federal agencies overseeing the plan for vaccine distribution, told the Senate last week, Trump had been blocking them from communicating at all with the Biden-Harris transition team. Why? Because of Trump’s petulant crusade against reality. Indeed, Trump is still refusing to accept the election results, hoping that desperate lawsuits and the bullying of local elections officials will somehow allow him to remain in office despite the fact that he lost the election convincingly.

Trump may have been talked into allowing the formal transition to begin, but he’s still obsessed with proving the election was fraudulent. Now that his many lawsuits have been thrown out of court for lack of evidence, he is becoming concerned that his crazy legal team is making him look bad. As if he hadn’t already done that to himself.

NBC News: Behind the scenes, Trump frustrated with his legal team’s maneuvers.

While President Donald Trump has publicly praised his legal team’s efforts, he has privately expressed frustration with the slapdash nature of his election defense fight, according to several people familiar with the discussions.

The president has been complaining to aides and allies about his personal attorney Rudy Giuliani and recently-removed lawyer Sidney Powell’s over-the-top performances at a news conference at the Republican National Committee headquarters last week, these people said. Both Giuliani and Powell have continued to make conspiratorial and baseless claims about widespread voter fraud, for which they have provided no evidence.

The president is concerned his team is comprised of “fools that are making him look bad,” said one source familiar with the thinking. Asked why he would not fire them, this person replied, in essence, who knows?

The president grew less impressed with Powell over the weekend, as she continued to make outlandish comments, including falsely accusing Georgia’s Republican governor and its secretary of state of being part of a scheme to alter votes.

That ultimately led to the terse statement the Trump campaign put out Sunday night on behalf of Giuliani and senior legal adviser Jenna Ellis: “Sidney Powell is practicing law on her own. She is not a member of the Trump legal team. She is also not a lawyer for the President in his personal capacity,” it read.

Trump was also not pleased with the optics of the brown substance, presumed to be hair dye or a makeup product, dripping down Giuliani’s face during the nearly two-hour news conference Thursday, according to one of the sources familiar with the president’s reaction.

Even Rush Limbaugh is complaining about the “legal team.” Earth to Trump: you chose these morons. Only the best people, right?

Just moments after a federal judge issued a blistering rebuke of their evidence-free, legally-confused effort to contest President-elect Joe Biden’s win in Pennsylvania, President Donald Trump’s legal team flailed to spin the crushing loss as some sort of bizarro-world victory. Trump campaign attorneys Rudy Giuliani and Jenna Ellis claimed in a statement that the dismissal “turns out to help us in our strategy to get expeditiously to the US Supreme Court.”

But if the Trump campaign’s legal team is counting on the Supreme Court to save them, they’re delusional. In this case, and in the larger effort to contest the outcome of the 2020 election, Trump’s team is just about out of runway.

Indeed, Saturday’s ruling by federal judge Matthew Brann — an appointee of President Barack Obama who previously held various positions in Pennsylvania’s Republican party — is one of the harshest rebukes I’ve ever seen from any judge. Brann heaped scorn on the Trump campaign’s “strained legal arguments” which, he noted, are “without merit … and unsupported by evidence.” He ridiculed one of the Trump team’s primary constitutional claims as a “Frankenstein monster.” And Brann noted that the Trump campaign position, if adopted, would “disenfranchise almost seven million voters.”

There’s much more at the CNN link. I seriously doubt that even the most extreme SCOTUS justices are going to want to touch the Trump cases with a ten-foot pole.

And then there’s Trump’s crazy pal Roger Stone. The Daily Beast: Roger Stone-Tied Group Threatens GOP: If Trump Goes Down, So Does Your Senate Majority.

Conservative operatives and a super PAC with ties to infamous GOP dirty trickster Roger Stone are calling for Trump supporters to punish Republicans by sitting out Georgia’s crucial Senate runoffs or writing in Trump’s name instead. And though their efforts remains on the party’s fringes, the trajectory of the movement has Republicans fearful that it could cost the GOP control of the Senate.

The most aggressive call to boycott or cast protest ballots in the two runoff races has, so far, come from a dormant pro-Trump super PAC with ties to Stone, which unveiled a new initiative to retaliate against the Republican Party’s supposed turncoats by handing Democrats control of the U.S. Senate.

The group, dubbed the Committee for American Sovereignty, unveiled a new website encouraging Georgia Republicans to write in Trump’s name in both of the upcoming Senate runoff elections, which could determine the party that controls the upper chamber during President-elect Joe Biden’s first two years in office. The PAC argued that doing so will show support for the president in addition to forcing Republicans to address the wild election-fraud conspiracy theories floated by Trump supporters and members of his own legal team.

“If we can do this, we have a real chance at getting these RINO senators to act on the illegitimate and corrupt election presided over by a Democrat party that is invested in the Communist takeover of Our Great Nation,” the group wrote on its new website, writeintrumpforgeorgiasenate.com. “We will not stop fighting for you, the American Patriot, against the evils of Socialism and inferior Religions.”

The effort is representative of a broader push among some of President Trump’s most devoted supporters to withhold support for the two Georgia Republican senators facing competitive runoff challenges, Kelly Loeffler and David Perdue, in the hope of leveraging the party’s fear of losing the U.S. Senate to get more establishment backing for their drive to change the result of the election. The goal, those operatives say, is to expose a supposed vast election fraud conspiracy abetted by high-level Republicans in Georgia’s state government, including Gov. Brian Kemp and Secretary of State Brad Raffensperger.

Can we survive 57 more days of this insanity? I guess if we got through four years of it, we can hang on a bit longer–but it won’t be easy.

Take care, Sky Dancers! Enjoy your Tuesday in whatever way works best for you. I plan to read a novel and take a nap this afternoon. Please check in with us in the comments if you have the time and inclination.