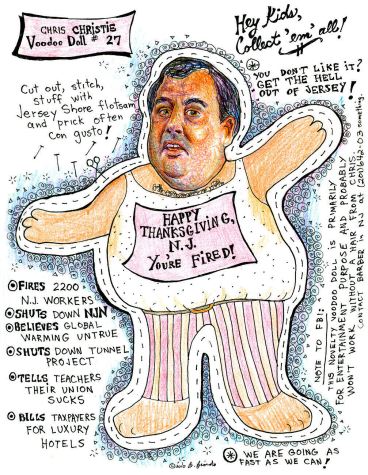 Far be it for me to complain about other states’ crazy Republican governors.  The Wisdom Beings know that my crazy Republican Governor Bobby Jindal is right up there with the worst of them.  After all, how many folks can say their governor helped kidnap and physically abuse  a young woman in the name of an exorcism and then wrote about it as a spiritual experience in their school newspapers?

Chris Christie–pardon the pun–is big among Republican circles these days because he supposedly is showing how failed economic policies aren’t really failing.  This appears to be a Republican obsession these days.  Of course, they are failing, have failed and will fail.  So, what do you do when the facts just can’t be changed?  You lie.

Paul Krugman mentioned this offhandedly last week. Chris Christie is trying to run on the idea of “The Jersey Comeback”.  The problem is that it’s not the least bit true.  Ask any one that actually lives in New Jersey and check out their stats.  This isn’t stopping Christie from peddling his big fat lies as a big fat lying liar. You can check a really astounding FRED graph at that Krugman site that shows exactly how bad the employment situation is in New Jersey when compared to New York and Pennsylvania.

One real problem with living in New Jersey is that the state’s two major cities are, of course, New York and Philadelphia — which means that even if you live here, policy and politics reporting tends to be sparse. So it wasn’t until the latest budget fiasco surfaced that I even knew that Christie was running on the theme of the “Jersey Comeback”.

And now that I know, I wonder what on earth he’s talking about …

I’m actually not sure why NJ is doing so much worse than New York or Pennsylvania, and I doubt that Christie has much to do with it, but he’s the one trying to claim credit for … what?

Of course, his response to this chart would probably be to yell insults at the Bureau of Labor Statistics.

So, the funny thing is that Economist Stan Collender took Krugman’s back-of-the-napkin–with no offense intended to the NYT–analysis and lit it on fire. I’ve taught from both Krugman and Collender’s books.  I follow their research.  Both are terrific scholars.  Both also blog with intense shrillness when they bump into just plan out and out lying.  This brings us back to the Big Fat Lying Liars that are all over the Republican Party these days.  Collender does the shrill one one better writing “Is This The Economic Dark Ages In The U.S?”  I’ve quoted the entire thing because it’s so succinct I couldn’t just excerpt it.  The goddess of fair use will have to forgive me along with Dr. Collender.

My guess is that Paul Krugman thought that this post was one of the more trifling economic-oriented pieces he has written in a while. It was short and probably took little time. It was also seemingly commonplace. After all, it was about a politician who said something inherently and obviously false.

But I found it to be extremely disturbing, not because it was off-the-wall — it’s anything but — but because it described a behavior — bald-face lying — that has become so blatant and commonplace among Republican policymakers on economic issues that any one of them who is even slightly honest and candid now would be both an absolute rarity and a welcome relief.

And the fact that the GOP lying about the economy…and especially the budget…is so accepted and expected means that any Republican who wasn’t jump-the-shark ridiculous on these issues wouldn’t be allowed to stay in the party much longer.

The obvious frustration that Krugman expresses in the post (not to mention the almost back-of-the-hand way he swats away Governor Chris Christie’s one-liner about the strength of the New Jersey economy and in the process makes the governor appear ridiculous to anyone who takes the time to look at the facts) mirrors what I was thinking when I posted this about House Speaker John Boehner (R-OH) last week.

As I noted in the post, Boehner, who easily qualifies as the weakest and least effective Speaker in my lifetime and has to be included on the list of the all-time worst in U.S. history, demonstrated yet again that he’ll say and do anything to stay speaker even when what he’s saying about the budget can easily be shown to be nonsense and when he knowingly and without giving it a second thought  threatens the well-being of the U.S. economy.

I’d say this doesn’t bode well for the outcome of this year’s federal budget debate, but that’s both obvious and an understatement. It actually points to the a period in U.S. history that is very likely to be labeled by historians as its economic dark ages.

Krugman actually inkled something similar over the weekend in a interview with Raw Story where he said “This may be when it all falls apart”.

“We are living through a time where we face an enormous economic challenge,” he told RT’s Thom Hartmann. “We are facing — obviously — the worst challenge in 80 years and we are totally mucking up the response. We’re doing a terrible job. We’re failing to deal with it. All of the people, the respectable people, the serious people, have made a total hash of this. That is a recipe for radicalism. It is a recipe for breakdown.”

Krugman noted that the massive demonstrations in parts of Europe were reminiscent of the 1930s.

“There are a lot of ugly forces being unleashed in our societies on both sides of the Atlantic because our economic policy has been such a dismal failure, because we are refusing to listen to the lessons of history. We may look back at this thirty years from now and say, ‘That is when it all fell apart.’ And by all, I don’t just mean the economy.”

I have no idea why so many people seem so wedded to absolute lies.   Unfortunately, they are our policy makers.   Right now, they are so attached to their lies that it seems a lot of us think they are willing to bring down the entire country and it looks like they bloody well will do it too.  What really gets me is that so many stupid people seem to want to believe these lies.  What’s an economist to do but just be as shrill as possible. 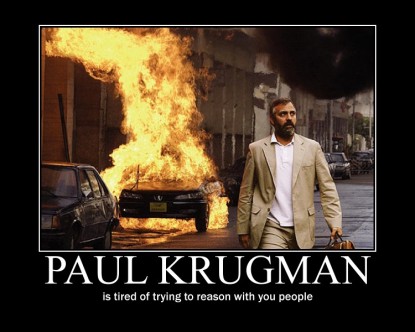