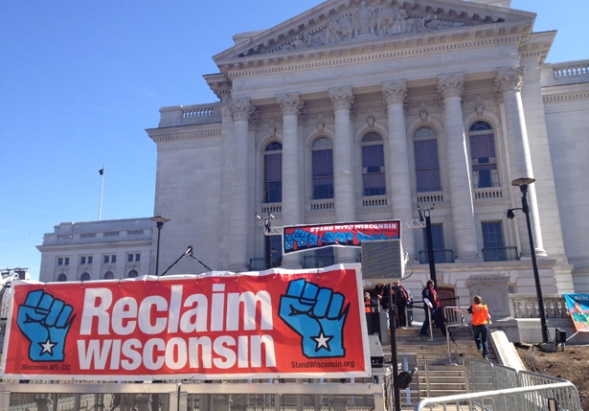 Today is the day of reckoning for Wisconsin. Voters will go to the polls today to decide the fate of Governor Scott Walker and five other Wisconsin Republicans: the Lieutenant Governor and four state senators. If the Democrats can win just one of those seats, they will regain the senate majority.

I think everyone here knows the genesis of this recall battle, but here’s a quick explainer from Chris Cillizza at the WaPo. Cillizza also speculates on possible surprising outcomes from the election.

Cillizza allows that Barrett could conceivably win and the Democrats could retake the senate–the latest poll by PPP had Walker leading by only 3 points, within the margin of error. The poll also suggested that Barrett had the momentum as of yesterday. On the other hand, InTrade had Walker’s chances at more than 90% late last night. The truth is no one really knows for sure, because the turnout and enthusiasm on each side will tell the tale. Cillizza, being a Villager, still thinks Walker will win, but thinks the Senate could switch.

They need only win one race to take control.

Fitzgerald is likely safe given his heavily Republican district, although Lori Compas, his Democratic rival, has attracted a lot of media attention.

But Democrats are bullish on the races against Moulton and Wanggaard. Both districts went for President Obama in 2008; Wanggaard’s went narrowly for John Kerry in 2004. Whether Barrett wins or not, they expect to take back the state Senate.

Cillizza points out that if Barrett wins and the Democrats take the state senate and could get some of the Walker legislation overturned before another election could give the senate back to the Republicans. The other possibility, Cillizza mentions is that Democrats could defeat Walker’s Lt. Governor Rebecca Kleefisch, but that’s pretty unlikely. She’s leading in the polls at the moment.

The Seattle Times had a good article on Sunday about the national issues that are at stake in the election today.

Under fire for cutting budgets at the expense of public employees, Walker would be the third governor in U.S. history yanked from office in a recall election. Walker has an edge, but the race is close.

The campaign will mean more than who governs Wisconsin. It’s a test case of the larger clashes in American politics that are driving elections for the presidency and control of Congress, highlighting divisions over the costs of government.

With more than $30 million raised from conservative donors, many of them from other states, and visits from a who’s who of high-profile Republican governors (New Jersey’s Chris Christie, South Carolina’s Nikki Haley, Louisiana’s Bobby Jindal and Virginia’s Bob McDonnell), Walker’s campaign to survive the recall has the feel, the money and the stakes of a national race.

The state vote is raising questions that will echo nationwide. Can a tough-minded conservative Republican force cuts in government at the risk of angering public-employees unions and win a swing state such as Wisconsin? Will voters think he’s doing the best he can in a tough time? Or will they rise in a grass-roots backlash against the well-financed Republican effort?

Admittedly, that article has a Republican flavor, but it does do a pretty good job of spelling out the issues. For a more left-wing perspective, here’s a lengthy piece at by Sarah Jaffe of Alternet: Wisconsin’s Recall Drama Down to Nail-Biting Finish.

Wisconsin’s recall is, as reporter John Nichols put it, the kind of “renegade politics” that are disdained by the national Democratic party and even some state Democrats. It is being driven by the same activists who turned out by the thousands to occupy their capitol when Governor Scott Walker attacked workers’ right to organize and bargain collectively.

Now, a day before the biggest recall yet—of Governor Walker, Lieutenant Governor Rebecca Kleefisch, and four Republican state senators—the fight will be won or lost where it began: on the ground.

There’s a lot of big outside money pouring into Wisconsin, mostly to pump up Walker’s attempt to hang on to his seat, but the one thing that money can’t buy is an excited, driven grassroots movement. If Milwaukee mayor Tom Barrett beats Walker on Tuesday, it will be because of thousands of volunteers getting out the vote person by person.

“This is really a case of Walker raising $13 million against possibly the most widespread grassroots get-out-the-vote effort in the state’s history,” Matt Reiter, co-president of the Teaching Assistants’ Association at the University of Wisconsin at Madison, told AlterNet.

Please try to check that one out. It’s long, and very informative. John Nichols of The Nation (mentioned prominently in Jaffe’s piece) is Wisconsin native, and has written a book about the struggle in his home state. Here’s a piece Nichols wrote yesterday: How To Buy A Recall Election.

Governor Scott Walker is not trying to win the Wisconsin recall election that will be held June 5.

He is trying to buy it.

If the embattled governor does prevail, he will provide essential evidence not of his own appeal but of the power of money to define our politics.

On the other hand, if Walker is defeated, a template will have been developed for a people-power, message-power politics that might be able to challenge big money.

And there is no question that what is in play is very big money.

Read the gory details at the link.

At Salon, Josh Eidelson writes about the possible effects of some Wisconsin voters’ “resentment” of union workers on the recall outcome.

If Scott Walker survives tomorrow’s election, there will be plenty of reasons. Many people will point to his huge cash advantage, for good reason. But no factor will have been more important than the decades of decline in U.S. union membership.

“Unions had their place,” a woman named Jerri told me soon after I arrived in Wisconsin last week. “They did their part back in the ‘40s and ‘50s, and then they got too big, and are abusing their power.” Jerri and her husband, Tim (both declined to give last names), were eating at a bar in Wauwatosa, the purple Milwaukee suburb that’s home to Scott Walker. They both work in sales: She’s in retail at the mall; he’s in wholesale, selling caskets. Tim said Walker’s union “reforms” were necessary because local politicians had been “looking out for the union” instead of “people like me.” He said unions are for people who don’t “feel they should have to work very hard.” Jerri complained that unions “are sucking off my teat.” Public workers’ benefits, she said, “should be the same as anybody in any kind of private job.”

That last statement is most telling. While resentment toward unions has grown since the 1950s, it’s not because they got too big. It’s because they got too small. A multi-decade drop in unionization left fewer Wisconsinites who are union members or live in union households. Meanwhile, because governments are less prone than businesses to terrorize workers or shut down facilities to avert unionization, public sector unionization has remained more stable. In 2009, for the first time, there were more total U.S. union members in government employment than in the entire private sector.

That one is pretty scary for those of us who care about quality education and public services.

The Wall Street Journal highlights the importance of turnout in the recall election.

Both sides say few voters remain undecided, after more than $63.5 million in political spending saturated the airwaves and clogged voters’ mailboxes. A weekend survey by the Democratic group Public Policy Polling found Mr. Walker holding a slight lead and only 3% of likely voters undecided. With few voters left to persuade, the main question is which side will win the turnout battle.

Labor groups and their allies knocked on more than 300,000 doors during the past few days and placed more than 400,000 phone calls, said Brian Weeks, the assistant political director for the American Federation of State, County and Municipal Employees union.

Unions historically have had a strong ground game. But Republicans said they took a page from labor’s playbook and have developed a coordinated get-out-the-vote effort, which could also give the party a boost in the November presidential election, helping the GOP equal the Democrats’ election-day machinery.

Felicia Sonmez and Rachel Weiner of the WaPo write about the battle of “TV ad spending vs. boots on the ground.” They say that this election:

serves as a proxy for the national battle between Democrats’ much-touted ground organization and Republicans’ fundraising advantage.

With Walker ahead in the polls and leading Milwaukee Mayor Tom Barrett (D) in the money race by more than 7 to 1 – and with GOP-aligned outside groups far outspending their counterparts across the aisle — Democrats maintain that their shot at victory depends on a far superior get-out-the-vote operation buoyed in large part by organized labor.

According to Monica Davey at the NYT,

About 60 to 65 percent of Wisconsin residents of voting age are expected to go to the polls on Tuesday, the state’s Government Accountability Board said. That would be a higher turnout than two years ago, when Mr. Walker and a wave of Republicans largely swept state and federal offices here, but not as high as the more than 69 percent turnout in 2008, when Barack Obama easily won the state.

Only time will tell. We’ll have a live blog this evening so we can follow the results together. Now I need you to let me know what else is in the news. I look forward to clicking on your links.