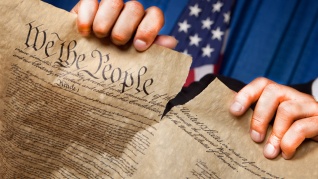 Are we in a Constitutional crisis yet? I think we are. Trump is acting as if he has dictatorial powers and it appears that some of our institutions are crumbling under his attacks.

The State Department and the Justice Department are going along with Trump’s undemocratic demands. Bill Barr has turned the DOJ into Trump’s private law firm. Trump is now attacking the judicial system, demanding that judges treat his cronies leniently and punish his enemies harshly.

The Defense Department has acquiesced to his taking funds appropriated for other purposes to build his idiotic border wall. The GOP-controlled Senate has refused to rein him in through his impeachment trial, and in the process they have damaged their own legislative and oversight powers.

Can we survive Trump’s attack on our democracy? It looks like our only hope is to defeat him in November, but Republicans in the Senate are doing their damnedest to prevent any attempts to protect election security. In acquitting him in the impeachment  “trial,” GOP Senators endorsed Trump’s efforts to get foreign governments to help in his reelection. Finally, Trump could very well win enough electoral votes to win even if he loses the popular vote again.

We definitely need massive protests in the streets. Will it happen? We also need the media to wake up and take this crisis seriously. Yes Trump is a moron and does all kinds of moronic things, but this is no laughing matter. Investigative reporters need to continue revealing Trump’s corruption and his power grabs and political reporters need to focus more on vetting the Democratic candidates and writing about their policy proposals and less on the horse race.

Stories to check out today

Michael Gerhardt at The Atlantic: Madison’s Nightmare Has Come to America.

The Senate’s impeachment trial of President Donald Trump is over, ending with all but one Republican voting to acquit. But the effort to make sense of its constitutional ramifications is only beginning. 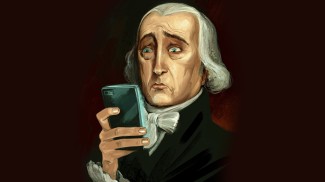 Almost a half century ago, President Richard Nixon’s resignation was thought to have proved that the constitutional system worked, with the House, the Senate, and a special prosecutor each having conducted long, painstaking investigations into his misconduct; the Supreme Court having directed President Nixon to comply with a judicial subpoena to turn over taped conversations; and the House Judiciary Committee having approved three articles of impeachment shortly before Nixon resigned.

In sharp contrast, few think that the acquittal of President Trump is a triumph for the Constitution. Instead, it reveals a different, disturbing lesson, about how the American political system—and the Constitution itself—might be fundamentally flawed.

Since the writing of the Constitution, three developments have substantially altered the effectiveness of impeachment as a check on presidential misconduct. The first is the rise of extreme partisanship, under which each party’s goal is frequently to vanquish the other and control as much of the federal government as possible. This aim is fundamentally incompatible with the system that James Madison designed, premised as it was on negotiation, compromise, and a variety of checking mechanisms to ensure that no branch or faction was beyond the reach of the Constitution or the law.

Read the rest at the link. It’s not very long.

Stephen Collinson at CNN: The President’s decision to expand his power post-trial has stunned Washington.

It’s time to stop asking whether President Donald Trump will learn lessons from the controversies he constantly stokes — of course he does. But far from stepping back or opting for contrition as his critics and appeasers hope, Trump draws darker political conclusions. 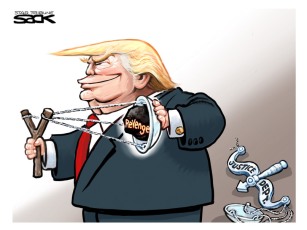 The result is that he expands his own power by confounding institutional restraints and opening a zone of presidential impunity — while at the same time delighting his political base.

Trump’s interference in the sentencing of his long-time associate Roger Stone and a post-impeachment retribution splurge reflect a lifetime’s lessons of a real estate baron turned public servant.

On Wednesday, Trump publicly praised the Justice Department for reversing its call for a stiff jail term for Stone after his own critical late night tweet that laid bare fears of blatant interference in bedrock US justice.

“I want to thank the Justice Department for seeing this horrible thing. And I didn’t speak to them by the way, just so you understand. They saw the horribleness of a nine-year sentence for doing nothing,” the President told reporters.

He noted that the four prosecutors who quit the Stone case “hit the road,” raising the prospect that their protests failed to introduce accountability to the administration and only served to further hollow out the government and make it more pliable to the President.

Trump denied that he crossed a line. But his tweet left no doubt about what he wanted to happen. And his strategy, in this case and others, actually worked.

Just as he used US government power to smear Joe Biden in the Ukraine scandal, he succeeded in getting favorable treatment for a friend in the Stone case — though the final sentence will be up to a judge.

Chuck Rosenberg at The Washington Post: This is a revolting assault on the fragile rule of law.

Something extraordinary and deeply troubling happened at — and to — the Justice Department this week. Four federal prosecutors properly, and as a matter of conscience, withdrew from the Roger Stone case. They had shepherded that case through the criminal-justice system but in an alarming development were ordered to disavow a sentencing recommendation they filed with the federal judge overseeing the matter…. 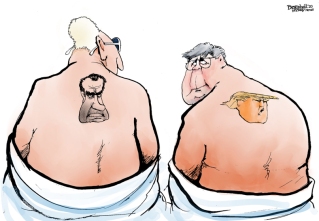 We all understand that the leadership at the top of the department is politically appointed, and we make peace with that (in addition to my work as a career federal prosecutor, I served in political positions under Presidents George W. Bush and Barack Obama in the Justice Department and worked for thoughtful appointed leaders of both parties), but being asked by that leadership to allow politics to corrode our work is not remotely normal or permissible. And it is treacherous.

The rule of law is a construct. It was made by people — and is nurtured and preserved by people. It can also be destroyed by people. And unlike the law of gravity, which works everywhere and all the time (at least on this planet), the rule of law is precious and fragile. As citizens and prosecutors, we either safeguard it or we surrender it. That’s the choice. What political leadership did here — mandating a favor for a friend of the president in line with the president’s publicly expressed desire in the case — significantly damages the rule of law and the perception of Justice Department fairness.

Principled resignations by career federal prosecutors highlighted this dangerous stunt. I am proud of them for that.

But I find it revolting that they were pushed into that corner (one resigned his job; three others resigned from the case) and saddened by their sacrifice. This is not normal and it is not right,and it is dangerous territory for the rule of law.

Safeguard or surrender. You choose.

Bob Bauer at The New York Times: Trump and Barr Are Out of Control. 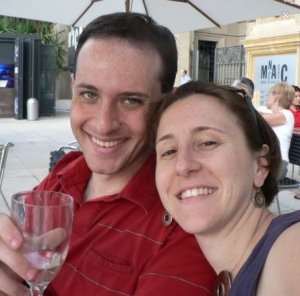 The resignation of a Justice Department prosecutor over the sentencing of Roger Stone is a major event. The prosecutor, Jonathan Kravis, apparently concluded that he could not, in good conscience, remain in his post if the department leadership appeared to buckle under White House pressure to abandon a sentencing recommendation in the case of Mr. Stone, the associate of President Trump who was convicted of obstructing a congressional inquiry into Russian meddling in the 2016 election.

Three of his colleagues quit the Stone case but remain with the department: Mr. Kravis left altogether. Even though the president for years has derided federal law enforcement officials, accusing them variously of conflicts of interest and criminality and weakness in not pursuing prosecution of his political opposition, Mr. Kravis’s is the first resignation in the face of these assaults.

Dramatically forceful responses to Mr. Trump’s assaults on rule-of-law norms have been all too rare. A resignation can set off an alarm bell for an institution whose failings an official might be unable to bring to light in no other way, or as effectively. It upholds rule of law norms in the very act of signaling that they are failing. It makes its point with power and transparency, and stands a chance of rallying support from those who remain in place and compelling other institutions like the press and Congress to take close notice.

The government official who resigns for these reasons is, paradoxically, doing his or her job by leaving it.

Read more at The NYT.

President Donald Trump’s post-impeachment acquittal behavior is casting a chill in Washington, with Attorney General William Barr emerging as a key ally in the president’s quest for vengeance against the law enforcement and national security establishment that initiated the Russia and Ukraine investigations. 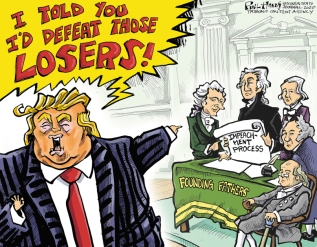 In perhaps the most tumultuous day yet for the Justice Department under Trump, four top prosecutors withdrew on Tuesday from a case involving the president’s longtime friend Roger Stone after senior department officials overrode their sentencing recommendation—a backpedaling that DOJ veterans and legal experts suspect was influenced by Trump’s own displeasure with the prosecutors’ judgment.

“With Bill Barr, on an amazing number of occasions … you can be almost 100 percent certain that there’s something improper going on,” said Donald Ayer, the former deputy attorney general in the George H.W. Bush administration.

The president has only inflamed such suspicions, congratulating Barr on Wednesday for intervening in Stone’s case and teeing off hours later on the prosecutors, calling them “Mueller people” who treated Stone “very badly.”

The president said he had not spoken with Barr about the matter, but Ayer called the attorney general’s apparent intervention “really shocking,” because Barr “has now entered into the area of criminal sanction, which is the one area probably more than any other where it’s most important that the Justice Department’s conduct be above reproach and beyond suspicion.”

What will today bring? I haven’t turned on the TV yet, but I’m very fearful of what Trump will do next. Courage, Sky Dancers! This is an open thread.