The cherry blossoms have reached their peak in Washington DC, just in time for today’s Cherry Blossom Parade, scheduled for 10AM-12PM today. WaPo:

The blossoms reached peak Thursday and should still be putting on a good show this weekend. Because of the variability of weather, they aren’t always this near peak at parade time.

The parade proceeds west along Constitution Avenue from Seventh to 17th streets.

Further south, in Augusta GA, the azaleas are in full bloom just in time for the Masters Tournament, which is going into its third day despite the loss of Tiger Woods to back surgery this year and Phil Mickelson’s failure to make the cut. Left-hander Bubba Watson was leading the pack by 3 strokes as of last night. 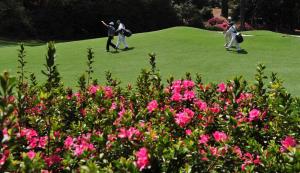 From the Augusta Chronicle: Bubba Watson storms to 3-stroke lead.

Bubba Watson never led during the first three rounds of the 2012 Masters Tournament but rallied on the final day and won in sudden death. The former Georgia Bulldog is on top now, halfway through the 78th Masters, with some breathing room.

Watson, 35, ripped apart the second nine at Augusta National Golf Club on Friday with five consecutive birdies en route to 4-under-par 68 – which included bogey on No. 18 – to build a three-shot lead over John Senden, of Australia. It matched the largest 36-hole lead since 2006.

Senden, who qualified for the Masters on March 16, when he won the Valspar Championship, also had a second-round 68 and is alone in second place.

Australian and defending champion Adam Scott made a spirited comeback to stay within shouting distance of Watson. Scott, who opened with 69, was 3-over after five holes Friday but played his final seven in 3-under, finishing with 72, tied for third place, four behind Watson.

There was a feeling around the Masters that the absence of Tiger Woods might not hurt as much as expected. With Tiger having ceded some of the spotlight to younger golfers in recent years, the sport was healthy enough to survive without him in Augusta.

ESPN’s first-round telecast was down 800,000 viewers from last year to a record low of 2 million. That’s the lowest Thursday viewership in the seven years the network has been broadcasting the Masters.

Okay, I know it’s unlikely that anyone else here cares about professional golf; I just wanted an excuse to post some pretty photos of spring flowers.

Up here in southern New England we’re just beginning to see a little yellow showing up on the forsythia bushes, but it’s going to be warm for the next few days, and soon Arnold Arboretum will showing off acres of yellow blossoms like those in the photo to the right. And it won’t be long before our cherry trees and azaleas are in bloom too!

Can you tell I’m trying to avoid the news?

In a little over a week, Boston will host its big spring event, the Boston Marathon, and between now and then we’ll be hearing endless talk about what happened here last year.

I’d like to avoid all the coverage, but I’ve decided instead to try to pay close attention to the coverage in corporate and alternative media and notice how the powers that be attempt to shape the narrative of last year’s dramatic events as well as the public process of dealing with them.

Yesterday, Boston NPR station WBUR had a very good discussion of Unanswered Questions Around The Marathon Bombing on the local program Radio Boston. It’s worth a listen.

I was quite surprised that one of the participants, Janet Reitman of Rolling Stone Magazine brought up the fact that nearly every breaking story on the events of last year came from CBS’ John Miller, who was obviously the designated target for FBI leaks. And Reitman was actually permitted to discuss this issue at some length. 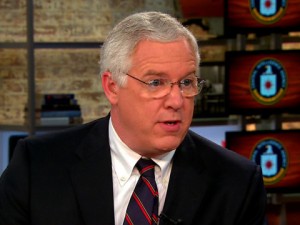 Miller began working for CBS in 2011; before that he worked for the Federal Government as “Associate Deputy Director of National Intelligence for Analytic Transformation and Technology”; and before that he was “Assistant Director for Public Affairs for the FBI.”

Currently he is working with his old friend Bill Bratton as “Deputy Commissioner of Intelligence” for the NYPD. Is this guy a journalist or is he a tool of law enforcement? He did work for ABC News in the 1990s. As such, he got an interview with Osama bin Laden in 1998. I wonder how that happened?

Here’s a piece about Miller in Men’s Journal from March 2013–shortly before last year’s Boston Marathon.

John Miller’s office at CBS News is filled with keepsakes from his two lives as top cop and leading reporter: badges from his tours with the New York and Los Angeles police departments; a photograph from his 1998 interview with Osama bin Laden in Afghanistan; his FBI badge and ID; even an LAPD Beach Patrol cap. (“The one job I never got,” Miller jokes.) “When I was covering the cops, I wasn’t one of those guys who showed up to work everyday saying ‘I’ve gotta find the scandal in the police department,'” says Miller. “And when I was with the police department, I didn’t hate the press for doing its job, either. Which I think has made it easier to toggle back and forth.”

But is avoiding anti-cop stories really the best attitude for a “journalist?” And how can such a journalist be expected to critically analyze leaks handed to him by law enforcement sources? I think the answers to those questions are obvious. And yet Miller basically shaped the news narrative on last year’s Boston Marathon bombings.

Last night NBC aired an hour-long program on the Boston attack: 108 Hours: Inside the Hunt for the Boston Marathon Bombers, hosted by Brian Williams. It was interesting for me to watch the video of the events that took place in Watertown as police hunted for the accused bombers; but of course no hard questions were asked. Everything law enforcement officials had to say was taken at face value.

One tidbit I learned was that President Obama had been on the phone with Governor Patrick during the lockdown of much of the city, and Obama had expressed concerns about the notion of government officials shutting down a major American city. I found that fascinating considering that critics on both the left and right have portrayed Obama as a tyrant who was probably in control of those kinds of decisions.

The news event that I’ve really been avoiding is the deadly bus accident in California.

I find it so painful to read or hear about children being hurt that I generally avoid such stories, but today I feel I have to cover the terrible bus crash in California. You may recall that we had a terrible bus accident in Boston just about a year ago. In fact there have been bus crashes all over the country. What’s going on?

A crash Thursday in Northern California killed 10 people and injured 34 when a tour bus carrying Los Angeles-area students collided with a FedEx truck. Eerily, the crash occurred almost exactly one year from the date of a tour bus crash in Irving that killed three people and injured dozens of senior citizens.

The history of serious crashes involving tour buses or motor coaches stretches back into the 1950s and highlights a pattern of danger that federal regulations have just begun to attempt to mitigate.

Congress wrapped bus safety improvements, including a provision for seat belts in recently built tour buses, into a larger transportation bill which was signed into law in 2012. Those regulations, however, only apply to buses produced in 2007 or later. The regulations do not order buses built before 2007 to be retrofit with safety belts.

The industry opposes requiring that existing buses be retrofitted with seat belts saying the seats are not designed for them and may not be strong enough to withstand the repeated pulling of straps. Retrofitting is also more expensive than adding belts to new buses.

Read more at the link. The story references numerous other articles about bus accidents.

Reuters on the latest incident: Investigators focus on cause of deadly California crash

Investigators were focusing on Saturday on what caused a FedEx tractor-trailer to collide with a bus in a fiery crash in northern California that killed 10 people, five of them teenage students en route to a college recruitment event.

It remained unclear whether the FedEx driver was somehow distracted or lost consciousness, or whether a mechanical failure occurred when his truck swerved across the median of Interstate 5 and slammed head-on into the motor coach full of students from the Los Angeles area on Thursday.

The California Highway Patrol also raised the possibility that a separate collision on the truck’s side of the highway might have been a factor in Thursday evening’s fatal crash.

According to early highway patrol accounts of the accident, the truck side-swiped a car after crossing the center divider but before hitting the bus. Two witnesses, Bonnie and Joe Duran, who were reported to be in the clipped car, told California media outlets that the truck was on fire before the collision. “I was heading along in the outside lane and I looked over and saw the FedEx truck coming straight for me and he was in flames already,” Bonnie Duran told a local CBS-affiliate.

I have a few more interesting reads for you today that I’ll just list briefly.

I highly recommend reading this op-ed at the WaPo by former SCOTUS Justice John Paul Stevens: The five extra words that can fix the Second Amendment. It’s an excerpt from his new book Six Amendments: How and Why We Should Change the Constitution.

See also Scott Lemieux’s review of Stevens’ book at The American Prospect: How John Paul Stevens Would Amend the Constitution.

I really liked this thoughtful post about the internet, privacy, and the NSA leak story at Haft of the Spear blog: You Were Promised Neither Security Nor Privacy.

Don’t miss this troubling story at the WaPo: Inside the FBI’s secret relationship with the military’s special operations. Can we all agree that the FBI (and CIA) are a lot scarier than NSA metadata storage?

Those are my offerings for today. What stories have you been following? Please share your links in the comment thread and have a nice Spring weekend!