Things are partially back around the little Kathouse on the Mississippi River. Wow, it’s been a while! I’ve had the power on for about a day and 1/2 but the cable TV and internet are still down with no ETA.  I’m using my neighbor’s wifi right now. She has a different provider.  There’s a convergence of anniversaries this month.

It’s been 20 years since we experienced the terrorist attacks on the World Trade Center.  I know JJ has much more vivid memories of that than me since her husband was in the tower. I await her thoughts as we approach the anniversary.

I was awakened by my neighbor Bryan who told me to turn on the TV and then from phone calls from the University telling me classes are canceled so stay home.  I turned the TV just in time to see the second plane hit the towers.  Shortly after that, we all watched the Towers fall. This led to a series of bad political/foreign policy decisions and the last 20 years of endless war in the Middle East. Bungalo Bush’s tenure was his own form of disaster and the Russian Potted Plant is the Disaster that keeps on killing.

Sixteen years ago, a zombie version of myself was parked on my late friend Jane’s sofa screaming at CNN to figure out the difference between the lower 9th ward and the upper 9th ward. The levees had failed and Hurricane Katrina became the next huge Dubya Bush failure. That was the year the Bad Hands people slapped a $10,000 named storm deductible on my home insurance policy that plagues me at least every several years and especially today.

Ah, today, America, land of massive hurricanes, massive fires, and can’t we all just agree this is the result of Climate Change and aim some torches and pitchforks at Exxon Mobile and captured pols?  Mexico gets a massive earthquake today and legal abortions.  Well, you know what Texas gave us, what Florida is doing to kill us, and what is going to happen on the 18th which could be another attempt at an insurrection by white Christian nationalists.

So, watching the news just keeps getting more stressful. Part of me is glad I didn’t get mine for about 10 days. My friend, a retired CNN news producer, keeps telling her colleagues to stop being part of the problem that what is going on right now is important and choose the right side and report on it. I keep thinking all these events call for us to stand up for humanity, justice, and democracy. The Republican Party is lost to its worst instincts.  Acknowledge they are not capable of governing us out of any crises and are responsible for most of them.  They seem to be doing Darwin’s work already thought with Covid-19.  Why do they want their base to basically die and kill others? 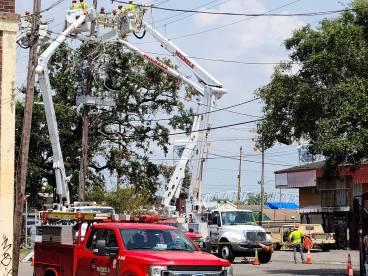 Lineworkers from Northern Wisconsin working to restore power to my street on September 7.

The intelligence assessment, dated Sept. 7, notes that in recent days, the department and partner agencies have found more violent online talk surrounding the #JusticeForJ6 rally, organized by Look Ahead America. The event seeks to support pro-Trump rioters who were jailed for their roles in the Jan. 6 Capitol attack.

A discussion thread on the far-right site 4chan includes calls to “do justice” against “local jews and corrupted officials.” It also says the demonstration should be used as a vehicle to participate in violent acts against local “Jewish centers and Liberal churches” while law enforcement is distracted.

Another comment from the thread reads, “I will be there with my AR15 even though legally I can’t have one f*** the Demonrats.” (ed. note: asterisks inserted by CQ Roll Call)

Look Ahead America, a group led by former Trump campaign employee Matt Braynard, asked for a permit in Union Square at noon on Sept. 18 for 700 participants, a number that has risen from 500. 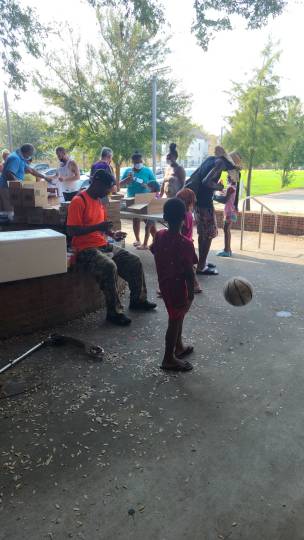 The city, state, and FEMA were all present throughout the neighborhood rec centers with cooling and charging stations, hot meals, and supplies. This has been my morning retreat for days. September 7 with neighbors at the Stallings Center.  FEMA is there helping with registrations.

Again, CNN reports that “Capitol Police memo warns of potential for violence during September 18 rally.”  They are preparing this time for trouble.

Law enforcement officials are bracing for potential clashes and unrest during an upcoming right-wing rally in Washington, DC, as violent rhetoric surrounding the September 18 event has increased online and counterprotests are being planned for the same day, according to an internal Capitol Police memo reviewed by CNN.

The latest intelligence report on the “Justice for J6” rally — which aims to support insurrectionists charged in the Capitol riots — notes that online chatter in support of the event started increasing after the officer who fatally shot rioter Ashli Babbitt went public with his identity in a recent interview with NBC’s Lester Holt.

There’s been a noticeable uptick in violent rhetoric around the event and heated discussions centered on Babbitt’s shooting on social media and discussion boards, according to the memo. The document warns that many individuals may also see September 18 as a “Justice for Ashli Babbitt” rally, which could be cause for concern, and it’s not unreasonable to plan for violent altercations. There have been additional discussions of violence associated with the event, with one online chat suggesting violence against Jewish centers and liberal churches while law enforcement is distracted that day.

There’s a list of those arrested for the US Capitol Breach on January 6 here at the website of the US District Attorney of the DC.  These are the insurrectionists that are the targets for the September 18th rally.  USA Today maintains a continuously updated list of these traitors here. This list has pictures and narratives for each of the individuals.  You can also check out the ones from your state!

So, thanks again to BB who held up my end of the deal here. Also, thanks to JJ who offered to put me and the Kathouse critters up. We have a wonderful family here and I appreciate and love each and every one of you!