Monday Mood Reads: It’s getting real out there 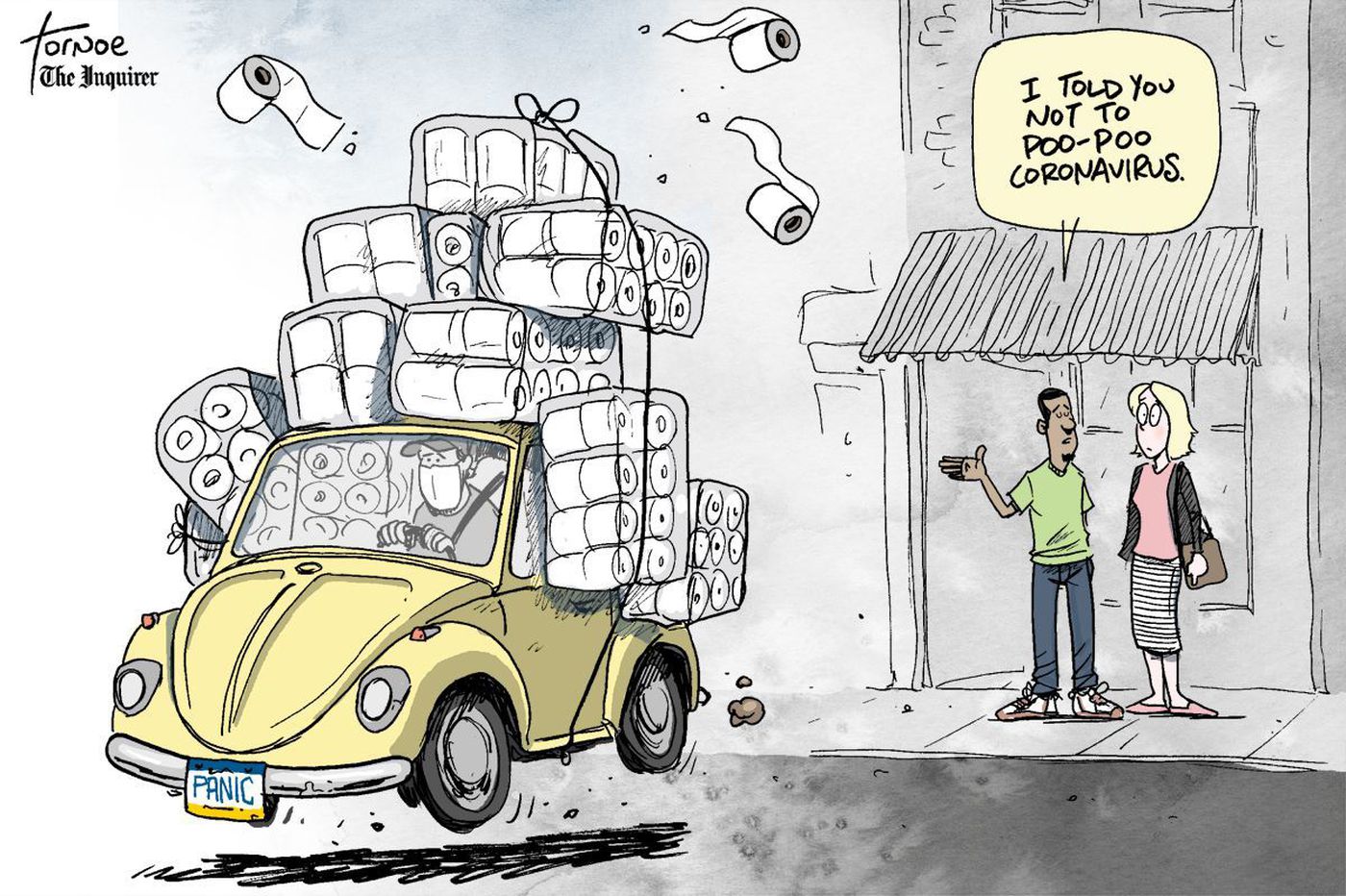 The weirdest news of the day continues to be the lines at Trader Joe’s and Whole Foods as white burbies do their panic hording of toilet paper. Did I miss the memo on the magical impact of Northern and Scott to keep them ensconced in the white burbie bubble? Panic buying is just one of things that make us human, I guess.  I’ve stocked up on a few things myself now but only because I’m convinced they’ll run the store empty and my plan is to go out as little as possible.

There’s nothing quite like the behavior of panicky humans—especially when it comes to hoarding. Let a blizzard approach or a hurricane churn toward shore, and we descend on stores, buying up more batteries, bottled water and canned foods than we could use in a lifetime. We’re seeing the same thing again as America hunkers down against the novel coronavirus, and of all of the products that are being snatched up the fastest, there’s one that’s in special demand: toilet paper.

The Washington Post reports a run on the rolls, with both Costco and the Giant supermarket chain stripped all but clean. Even Amazon’s physical stores “appeared to be down to single rolls of novelty toilet paper in some places Friday,” the Post said. The New York Times similarly reports from a Whole Foods supermarket in Somerville, Mass., where shoppers had to be limited to two packages of toilet paper each, lest they strip the store bare.

But why? What is it about toilet paper—specifically the prospect of an inadequate supply of it—that makes us so anxious? Some of the answer is obvious. Toilet paper has primal—even infantile—associations, connected with what is arguably the body’s least agreeable function in a way we’ve been taught from toddlerhood. Few, if any of us, remember a time when we weren’t acquainted with the product.

Ir’s no wonder that I just got emails from my German students telling me their government has told them to get out of the US.  That’s right, the German government has decided it’s not safe for them to be here.  I’m assuming they fully believe that it’s just a matter of time before US hospitals are overwhelmed.  It hasn’t stopped US college students from partying on dude.

A lot played out this weekend but the adult playpen areas like Bourbon Street, Nashville, and Ft Lauderdale continued to party on dude even as the major events for the tourist traps of America were shut down.  Student in Tulane were filling the campus’ dumpsters with furniture and home appliances as they were tossed out of their dorms.  Still, the first death in New Orleans of Covid19 didn’t stop wall to wall humanity on Bourbon Street or the Irish Channel despite that St Joseph’s an St Patrick’s parade being cancelled and all sporting events were cancelled.  The mayor finally sent the police in to clear the crowds.

By day, lower Magazine Street was packed with people in kilts and green shamrocks Saturday despite the cancellation of the city’s official St. Patrick’s Day parades, with many revelers appearing to hope that the luck of the Irish would be enough to keep the new coronavirus at bay.

By night, New Orleans police broke up a bustling party at a local bar, and Mayor LaToya Cantrell issued a strong statement, imploring people to practice “social distancing” to stop the spread of coronavirus. Around 6 p.m. Saturday, New Orleans officers arrived at Tracey’s Original Irish Channel Bar, one of the traditional epicenters of the St. Patrick’s Day holiday in the city, to break up a large party there.

Public officials have taken steps to limit gatherings in an effort to keep the virus from moving quickly through the population. Gov. John Bel Edwards has closed schools for several weeks and barred events where 250 people or more gather. But warnings from the governor and Cantrell about avoiding close contact and large gatherings were scarcely heeded Saturday along Magazine Street, through the Irish Channel and Garden District, where the streets were bustling.

Cantrell said that to fight this virus required social distancing, carried out in all seriousness.

Queues to buy guns in LA 😳

Buyers are scared of what will happen if people run out of food and supplies because of #CoronaVirus.

So, while some people spend endless time in lines buying cans of tuna, peanut butter, and toilet paper others day drink with their closest 500 or so friends.  Right.  This is America.  They’re also hoarding guns and panic buying guns.

Some further local news that’s surreal from any vantage point.  The French Market has been open continuously for over 300 years and it will be closing down today for an undetermined period.

Probably the most profoundly disturbing image yesterday was the Trumperz suprise visit to Pence’s attempt to bring some gravity to a Presser.  It’s been evident that number of cases is on the rise and the number of deaths have just started to look disturbing.  But hey, Trumperz was just a happy camper as the Board of Governors at the FED sent prices at the zero bound.  And, I ask you again?  Who is going to get a loan and like, buy something like a car right now?

So, Trumperz said “investors should be thrilled.”

Investors this morning to Trumperz (via the WSJ) :“Stocks Open Sharply Lower After Fed Slashes Rates. U.S. stocks drop 8%, while bond yields plummet again.”  He just doesn’t get anything right ever.  Oh, and then there’s this via CNBC: “Stock futures drop — hit ‘limit down’ — even as Fed slashes rates; Dow futures off 1,000 points   Stock futures plunged Sunday night even after the Federal Reserve embarked on a massive monetary stimulus campaign to curb slower economic growth amid the coronavirus outbreak.”

The real real is getting serious too.  From the Seattle Times: “EvergreenHealth doctor tests positive for coronavirus, in critical condition”.

An emergency room doctor at EvergreenHealth in Kirkland is in critical condition with COVID-19, the disease caused by the new coronavirus.

The hospital at the center of the coronavirus outbreak in King County confirmed that the doctor was ill Sunday afternoon.

“EvergreenHealth is providing care for one of our physicians who has a confirmed case of COVID-19. He is in critical condition but stable. Out of respect for our patient’s privacy and that of his family, there is nothing more we can share at this time,” says a brief statement issued by the hospital on Sunday.

The physician, who is in his 40s, has been admitted to the intensive-care unit and could be the first front-line health care worker in the state to test positive for the disease, said Dr. Liam Yore, the immediate past president of the Washington Chapter of the American College of Emergency Physicians.

Yore is an emergency room doctor who works primarily at Providence Regional Medical Center in Everett but is also on staff at EvergreenHealth. He spoke to The Seattle Times on behalf of his professional organization and not as a representative of the hospitals.

“There was an initial test on Tuesday and that came back negative,” Yore said of his EvergreenHealth colleague, who he described as “a dedicated and selfless physician.”

Everyone, young and old, needs to act now to slow the spread of COVID-19. The best thing Americans can to do fight coronavirus? #coronavirus https://t.co/JL1zzFvjTI

That’s not the hospital where my daughter practices but it is damn close.   USA’s headline today is the best advice these days: “The best thing everyday Americans can do to fight coronavirus? #StayHome, save lives ” That’s certainly my plan. I’m facing down 65 in November and while I’m relatively healthy, I will not be tempting fate.

I did watch a bit of the debate last night but was just overwhelmingly depressed especially after seeing parts of that stupid Presser.  Old White men will be the death of us all.  We’re going to have to vote for Biden to save what’s left of our country, but damn, I wish it didn’t come down to this.  Here are some headlines.

“Trump finds his MAGA movement fracturing over coronavirus  —  Just two weeks after President Donald Trump rallied conservatives to focus on the threat of socialism, his followers are splintering over the coronavirus pandemic. ”  via Politico.

“Biden leads Trump by 9 points in a one-to-one matchup  with Trump:  via MSNBC.

“Biden and Bernie face off: Key moments from Sunday’s debate”  also via Politico.  They even elbow bumped.

Under the cloud of the coronavirus pandemic, they talked about bailouts — and hand sanitizer. Biden said he washes his hands—a lot—”God knows how many times a day!”

Biden and Sanders met Sunday night, with Biden looking to open up a commanding lead for the nomination Tuesday and with the nation struggling to contain the fast-moving coronavirus.

The debate comes amid escalating spread of the disease that is dramatically altering Americans’ way of life and the normal rhythms of a campaign. In-person rallies and fundraisers have gone digital. Staffers are working from home. And Sanders’ chances to shift the dynamic in his favor have become even more limited.

The last thing you should try to read today is from David Leonhardt and the NYT. It’s really a depressing dose of reality but we need it. “A Complete List of Trump’s Attempts to Play Down Coronavirus  —  He could have taken action.  He didn’t. ”

President Trump made his first public comments about the coronavirus on Jan. 22, in a television interview from Davos with CNBC’s Joe Kernen. The first American case had been announced the day before, and Kernen asked Trump, “Are there worries about a pandemic at this point?”

By this point, the seriousness of the virus was becoming clearer. It had spread from China to four other countries. China was starting to take drastic measures and was on the verge of closing off the city of Wuhan.

In the weeks that followed, Trump faced a series of choices. He could have taken aggressive measures to slow the spread of the virus. He could have insisted that the United States ramp up efforts to produce test kits. He could have emphasized the risks that the virus presented and urged Americans to take precautions if they had reason to believe they were sick. He could have used the powers of the presidency to reduce the number of people who would ultimately get sick.

44 Comments on “Monday Mood Reads: It’s getting real out there”