Fourth of July Reads: May The Weather Gods Bring Storms to DC Today

A painting titled Declaration of Independence hangs on the wall inside the U.S. Capitol on May 17, 2017.

Maybe there really is a god?

Oh please let the rain pour down on Trump’s ridiculous salute to himself!

The New York Times: Washington Prepares for a July 4 Spectacle, Starring and Produced by President Trump.

Two Bradley armored vehicles rumbled into place on Wednesday in front of the Lincoln Memorial, to be joined later by two Abrams tanks parked nearby. Cranes were putting into place the scaffolding for Jumbotron screens. And workers raced to finish a red, white and blue stage where President Trump will preside over one of the most unusual Fourth of July celebrations the capital has known.

The audience for Mr. Trump’s speech will include thousands of troops assembled by the White House to create a made-for-television moment in which the nation’s commander in chief is surrounded by the forces that he leads.

You won’t see it live on CBS, ABC, NBC, or MSNBC, thank goodness. Those who want to watch the disaster unfold will have to turn to C-Span or Fox News.

Weather permitting, the traditional songs for each branch of the military will be played while their officers stand by the president’s side and a procession of aircraft, including Air Force One and the Blue Angels, roars through the skies overhead. Hundreds of guests, many of them handpicked by the Republican National Committee, will watch from bleachers in a V.I.P. section erected close to the podium.

“It will be the show of a lifetime!” the president posted Wednesday morning on Twitter.

But Mr. Trump’s decision to turn Washington’s annual Fourth of July celebration into a kind of Trump-branded rally for America has drawn criticism from Democrats, top representatives of the city government and many military officials who believe the president is using the troops and their gear as political props.

I’m rooting for the flop of a lifetime.

Apparently the White House staff is worried about a repeat of Trump’s sad Inauguration day.

The Washington Post has the tick tock on the preparations: Inside the effort to build suspense — and crowds — for Trump’s Fourth of July.

As President Trump’s appointees have worked doggedly to assemble the most ambitious and costly Fourth of July ceremony the nation’s capital has ever seen, they have been guided by one overriding principle: It cannot be a repeat of his 2017 inauguration.

The transformation of the Lincoln Memorial’s grounds into a made-for-TV setting, complete with a VIP seating section for donors and other political supporters, represents the culmination of a four-month-long effort to produce the military celebration the president has envisioned for nearly two years.

For a public gathering that is ostensibly targeting an audience of hundreds of millions of Americans, the display of weaponry, aircraft and pyrotechnics has been scripted primarily to satisfy an audience of one. By having Trump speak to a select audience, flanked by armored tactical vehicles, organizers hope he will avoid the prospect of facing a smaller crowd of the sort that gathered on the Mall for his swearing-in. 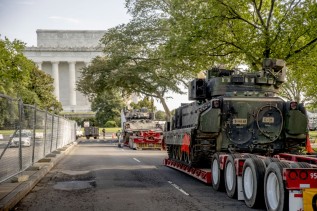 But the White House has also been scrambling in recent days to line up enough attendees, as Trump’s aides fret that either thunderstorms or the traditional free concert on the other end of the Mall could diminish the crowd for Trump’s 6:30 p.m. speech. The issue of crowd size has been a sore point with Trump since his inauguration, when far fewer people showed up compared with Barack Obama’s 2009 inaugural ceremony and the president pressed National Park Service officials for nonexistent photographic evidence of a larger audience.

The administration has provided 5,000 tickets to the military, the Pentagon announced Wednesday. Trump’s reelection campaign has handed passes out to allies, donors and trade associations — from the American Bankers Association to the British Embassy, according to people familiar with the matter, while several fundraisers and operatives also were tasked to hand out tickets.

It sure sounds this is an overtly political event. Trump should have to pay the expenses out of his own pocket–but who will force him to do it?

Nancy Cook at Politico: ‘They started this too late’: Trump officials and allies anxious about July 4 fest.

The White House and Republican National Committee have spent the past week scrambling to distribute VIP tickets to President Donald Trump’s Fourth of July speech at the Lincoln Memorial.

Now, White House officials and allies are wringing their hands over the risk of the hastily arranged event morphing into Trump’s Inauguration 2.0, in which the size of the crowd and the ensuing media coverage do not meet the president’s own outsized expectations for the event.

“They started this too late and everyone has plans already,” said Dan Eberhart, a Republican donor and CEO of the drilling services company Canary, LLC. “Everyone will be there in spirit, but in reality, people planned their July 4th activities weeks ago.”

Less than 36 hours before the event, White House aides were crafting Trump’s speech, while administration and RNC officials finalized the guest lists.

A White House official declined to explain the system for handing out tickets or the various tiers of VIP access, except to say the reserved seating area — extending from the steps of the Lincoln Memorial to the middle the reflecting pool — will feature veterans, Trump family and friends and special guests. The first lady, vice president and second lady, and a number of Cabinet officials are expected to attend, as well as several senior White House officials — though the aide stressed this, too, was still coming together.

“They are creating this thing from scratch, and I do not know if anyone knows how it will go off,” said another White House aide. “There are questions about the ticket distribution and who will show up. The weather might be bad. Heads are spinning.”

David Remnick at The New Yorker: Little Rocket Man. Donald Trump is trying to conflate a patriotic celebration with his reëlection campaign.

Trump, who talks about “my generals” and “my military,” has decided to turn the normally pacific Independence Day ceremonies in the capital into a martially tinged self-branding exercise. We are watching him blow hard into the balloon of his own ego. Trump is also trying to conflate a patriotic celebration with his reëlection campaign. The White House is doling out passes to Republican donors, members of the Republican National Committee, and other supporters.

Troops, tanks and a flypast will give a military flavor to this year’s Independence Day celebration in Washington, DC. yesterday.

According to the Washington Post, the Pentagon leadership has reacted to the increased militarization of the Fourth by “hiding out and hoping it all blows over.” Trump, of course, has spoken for “his” generals, saying that they are, in fact, “thrilled.” He is not likely to hear any high-level public objections from the Pentagon. He has not had a Senate-confirmed Defense Secretary since James Mattis resigned, in December, when he could no longer influence or countenance Trump’s chaotic decision-making process. There are some signs of public unhappiness, however. One liberal-leaning veterans group, VoteVets, plans to give out thousands of U.S.S. John S. McCain T-shirts on the mall, the better to remind people of Trump’s vicious insults directed against the late Arizona senator, an American prisoner of war in Hanoi, and of the way White House aides tried pathetically to hide the destroyer from the President’s view during a state visit to Japan….

Perhaps the most significant event at the G-20 session came when Vladimir Putin used the occasion to declare, in a run-up interview with the Financial Times, that “the liberal idea has become obsolete.” Sounding much like Trump at his fearmongering worst, Putin said, “The liberal idea presupposes that nothing needs to be done. The migrants can kill, plunder, and rape with impunity because their rights as migrants must be protected.” Leaders including Emmanuel Macron of France and Donald Tusk, the president of the European Council, stood up to Putin and the idea that Russian-style authoritarianism was the wave of the future. By contrast, Trump voiced not a word of objection. Why would he? He is in total agreement with Putin. And, in Osaka, he stood with the Russian President and mocked both the idea of a free press and the notion that Russia had ever interfered in the 2016 elections on his behalf.

And so, on the Fourth, we will watch Trump, who evaded military service by pleading phantom bone spurs, spend millions of dollars of public funds in order to enact a fantasy of martial leadership. He is doing it to flatter his base. He is doing it to solicit the criticism of his enemies (the better to turn that criticism on its head). And he is doing it because he can.

Read the whole thing at the link.

That’s all I have the strength for today; I’m simultaneously enraged and despondent. I wish all you Sky Dancers a peaceful and Trump-free Fourth of July.

34 Comments on “Fourth of July Reads: May The Weather Gods Bring Storms to DC Today”