Today is the 75th anniversary of D-Day. From History.com:

During World War II (1939-1945), the Battle of Normandy, which lasted from June 1944 to August 1944, resulted in the Allied liberation of Western Europe from Nazi Germany’s control. Codenamed Operation Overlord, the battle began on June 6, 1944, also known as D-Day, when some 156,000 American, British and Canadian forces landed on five beaches along a 50-mile stretch of the heavily fortified coast of France’s Normandy region. The invasion was one of the largest amphibious military assaults in history and required extensive planning. Prior to D-Day, the Allies conducted a large-scale deception campaign designed to mislead the Germans about the intended invasion target. By late August 1944, all of northern France had been liberated, and by the following spring the Allies had defeated the Germans. The Normandy landings have been called the beginning of the end of war in Europe.

To our eternal shame, our representative at the D-Day anniversary ceremonies is Donald Trump. I tried to watch his speech this morning, but I had to turn it off. In a maudlin monotone he read words that he likely had never seen before, expressing emotions he doesn’t have the capacity to feel.

OMAHA BEACH, France (AP) — With the silence of remembrance and respect, nations honored the memory of the fallen and the singular bravery of all Allied troops who sloshed through bloodied water to the landing beaches of Normandy, a tribute of thanks 75 years after the D-Day assault that doomed the Nazi occupation of France and portended the fall of Hitler’s Third Reich.

Troops on a landing craft approach a Normandy beach.

French President Emmanuel Macron and President Donald Trump praised the soldiers, sailors and airmen, the survivors and those who lost their lives, in powerful speeches Thursday that credited the June 6, 1944 surprise air and sea operation that brought tens of thousands of men to Normandy, each not knowing whether he would survive the day.

“You are the pride of our nation, you are the glory of our republic and we thank you from the bottom of our heart,” Trump said, of the “warriors” of an “epic battle” engaged in the ultimate fight of good against evil.

In his speech, Macron praised the “unthinkable courage,” ″the generosity” of the soldiers and “the strength of spirit” that made them press on “to help men and women they didn’t know, to liberate a land most hadn’t seen before, for no other cause but freedom, democracy.”

He expressed France’s debt to the United States for freeing his country from the reign of the Nazis. Macron awarded five American veterans with the Chevalier of Legion of Honor, France’s highest award.

“We know what we owe to you vets, our freedom,” he said, switching from French to English. “On behalf of my nation I just want to say ‘thank you.’”

President Donald Trump shared in a modern presidential tradition that dates back four decades when he stood Thursday at the edge of Omaha Beach in Normandy to commemorate the 75th anniversary of the D-Day invasion. 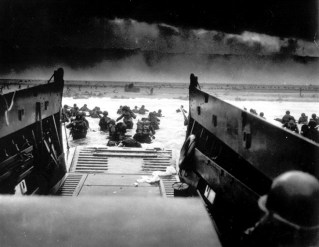 While under attack from heavy machine gun fire from the German coastal defense forces, American soldiers wade ashore off the ramp of a U.S. Coast Guard landing craft.

While the ceremony honored the sacrifices made on June 6, 1944, Trump’s “America First” presidency and the international drama he has carried with him duringhis third trip to France meant the president delivered an address less heavily focused on international alliances than many of his predecessors.

Like past presidents, Trump paid homage to the 160,000 American and Allied troops who landed on D-Day, altering the course of World War II. But he offered little embrace ofinstitutions such as NATO that rose out of the ashes of the fighting. Trump did not mention NATO by name in his address….

The American president has in the pastaccused allies and NATO partners of “ripping off” the United States.

“It’s going to be a tough challenge for him,” Nicholas Burns, a professor at Harvard’s Kennedy School of Government and a former U.S. ambassador to NATO who served presidents of both parties, said before the speech. “What we learned from D-Day and the Second World War is that we need allies.”

For a personal remembrance of D-Day, I highly recommend this piece in The Washington Post Magazine by Barry Svrluga: My Grandfather’s Secret D-Day Journal.

In the summer of 1992, my family gathered in central Minnesota for my grandfather’s 70th birthday. We were there to celebrate William J. Svrluga Sr. — father, golfer, husband, engineer, grandfather, Cubs fan, cheapskate, retiree. Seven of us joined in the celebration: Bill Sr.’s wife, Ruth, my grandmother; his two sons, my father, Bill Jr., and my uncle Dick; their wives; my younger brother, Brad, and me.

From left, Bill Svrluga Jr., Barry Svrluga, Dick Svrluga and Bill Svrluga Sr. at the Normandy American Cemetery and Memorial in Normandy, France, on June 6, 2003. (Photo courtesy of the author)

At one point, maybe between the walleye and the turtle cheesecake, the conversation hit a lull. Uncle Dick filled it. “Okay, Dad,” he asked. “What are you most proud of in your life?” I think I half expected my grandfather to say the time he shot even-par 72. What could be better than that? This was chitchat, brag-­about-the-family stuff, set up on a tee. Instead, he knocked us over with his response. “D-Day,” he said.

I remember it as both matter-of-fact on his part and jarring to the rest of us. Why, if D-Day had been so important to him, had we never heard about D-Day? We knew he had been there, part of the Allied invasion of Normandy. Right then, it became apparent how little else we understood. As the 75th anniversary of D-Day approaches, I’m again aghast that I thought he could have answered anything else.

After his grandfather’s death, Svrluga’s father Bill Jr. discovered the written record his father had kept of the D-Day preparations and fighting. Excerpts are included in the article. I hope you’ll read it.

So many men remained silent about their experiences in WWII. My father never talked about the horrors of Guadalcanal until the last couple few years of his life. Even then, he didn’t share many details of the fighting. But apparently many soldiers recorded their experiences of D-Day, as I learned when I googled “d-day diary” while searching for the WaPo story.

Another interesting story from The New York Times Magazine about journalist Ernie Pyle: The Man Who Told America the Truth About D-Day, By David Chrisinger

Most of the men in the first wave never stood a chance. In the predawn darkness of June 6, 1944, thousands of American soldiers crawled down swaying cargo nets and thudded into steel landing craft bound for the Normandy coast. Their senses were soon choked with the smells of wet canvas gear, seawater and acrid clouds of powder from the huge naval guns firing just over their heads. As the landing craft drew close to shore, the deafening roar stopped, quickly replaced by German artillery rounds crashing into the water all around them. The flesh under the men’s sea-soaked uniforms prickled. They waited, like trapped mice, barely daring to breathe. 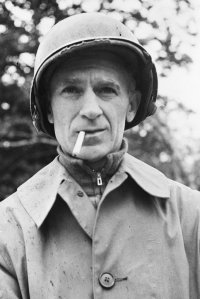 A blanket of smoke hid the heavily defended bluffs above the strip of sand code-named Omaha Beach. Concentrated in concrete pill boxes, nearly 2,000 German defenders lay in wait. The landing ramps slapped down into the surf, and a catastrophic hail of gunfire erupted from the bluffs. The ensuing slaughter was merciless.

But Allied troops kept landing, wave after wave, and by midday they had crossed the 300 yards of sandy killing ground, scaled the bluffs and overpowered the German defenses. By the end of the day, the beaches had been secured and the heaviest fighting had moved at least a mile inland. In the biggest and most complicated amphibious operation in military history, it wasn’t bombs, artillery or tanks that overwhelmed the Germans; it was men — many of them boys, really — slogging up the beaches and crawling over the corpses of their friends that won the Allies a toehold at the western edge of Europe.

That victory was a decisive leap toward defeating Hitler’s Germany and winning the Second World War. It also changed the way America’s most famous and beloved war correspondent reported what he saw. In June 1944, Ernie Pyle, a 43-year-old journalist from rural Indiana, was as ubiquitous in the everyday lives of millions of Americans as Walter Cronkite would be during the Vietnam War. What Pyle witnessed on the Normandy coast triggered a sort of journalistic conversion for him: Soon his readers — a broad section of the American public — were digesting columns that brought them more of the war’s pain, costs and losses. Before D-Day, Pyle’s dispatches from the front were full of gritty details of the troops’ daily struggles but served up with healthy doses of optimism and a reliable habit of looking away from the more horrifying aspects of war. Pyle was not a propagandist, but his columns seemed to offer the reader an unspoken agreement that they would not have to look too closely at the deaths, blood and corpses that are the reality of battle. Later, Pyle was more stark and honest.

David Frum at The Atlantic: The Ghosts of D-Day.

HuffPost: Trump Finally Arrives In Ireland For Taxpayer-Funded Visit To His Golf Resort.

The Washington Post: Trump to stay at Doonbeg, his money-losing golf course threatened by climate change.

The Washington Post: Trump’s catastrophic fashion choices in England were not just a sign of bad taste.

Politico: Who’s in — and out — of the first Democratic debates.